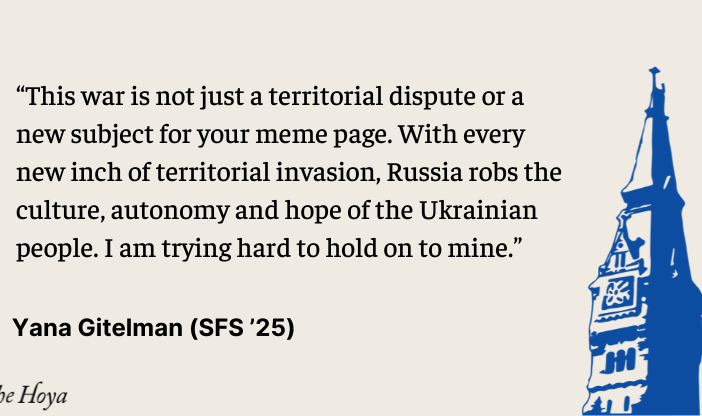 On Feb. 24, Russian President Vladimir Putin launched a violent military invasion into Ukraine. An unprompted act of aggression meant to destroy Ukraine, the invasion is not just a simple territorial dispute, but part of Putin’s ultimate goal of resurrecting the Soviet Union.

My father’s family immigrated from Lviv, Ukraine to the United States in 1991, and my mother’s side came from Moscow the following year. Growing up, I knew much more about the Russian culture that I came from. I grew up in a bilingual household, speaking Russian and English. I watched Russian cartoons and ate Russian food. I did not realize that my lack of exposure to Ukrainian culture was not because of my father’s lack of will; it was an intentional erasure.

My parents were not considered ethnically Ukrainian or Russian; they were Jews. As they did with people of all “nationalities,” the Soviet regime mandated that Jews be identified in their passports. Russia has crushed Ukranian Jews under its thumb, forcing them to live with national marginalization and antisemitism in their daily lives.

Today, Putin continues the Soviet tradition of exploiting a propagandized narrative of the Holocaust for political gain. His call to “denazify” Ukraine — a democratic country that elected a Jewish descendant of Holocaust survivors with 73% of the vote — is a blatantly antisemitic distortion of the truth.

It is by Putin’s design that the endangerment of Ukrainians and Jews is connected. It does not matter whether I am more Jewish, Ukrainian or Russian. This week, I put the balancing act away.

On Thursday, the morning after war broke out, I went with a friend to visit the Ukrainian embassy. Right before we left, a Ukrainian officer came out from inside the embassy to thank everyone who had come to visit. I wanted to say something to him. The first word that came to mind was Спасибo, “thank you.” I stopped myself. Everything I wanted to say, I could only say in Russian — the language forced on Ukraine, the language of our people’s oppression. Even saying слава українi, “glory to Ukraine,” would have revealed my Russian accent. So I silently nodded to him. That was the first time I cried about Ukraine.

My brother and I have been pushing for a trip to Lviv since we were kids; we wanted to see where our dad grew up. All we knew of Lviv were the pictures he would show us of his secondary school, a beautiful historic building in the city’s center. Our dad wanted to wait until we and his city were somehow perfectly “ready” to meet each other. Just before the COVID-19 pandemic hit, my dad started to open up to the idea. Now, I cannot help but wonder when the city will be ready. This week, I have not been able to shake the thought that by the time it is safe for us to go, the city could be in ruins.

I have several family members still in Ukraine with whom I used to Skype on special occasions. I have never gotten to see them in person, but I always assumed I would one day.

I have vivid memories of my dad monitoring the news during previous moments of Russian aggression toward Ukraine. In 2014, I did not understand the significance of the annexation of Crimea, or why my dad had spent the majority of the post-Soviet period insisting that Ukraine is doomed without Western support. Now, I understand him.

As I donate and check on loved ones this week, I am also learning to speak Ukrainian. I am practicing with my dad, finally learning our language. This small act of rebellion has made me feel some sense of control at a time that feels overwhelmingly helpless.

This war is not just a territorial dispute or a new subject for your meme page. With every new inch of territorial invasion, Russia robs the culture, autonomy and hope of the Ukrainian people. I am trying hard to hold onto mine.

This conflict did not arise suddenly. The dynamics surfacing this week have affected Eastern Europeans on the most personal level across many generations. If you find yourself wanting to compare this crisis to another in any way that may minimize either one, please stop yourself.

Engaging with Ukraine requires humility. Do not treat this very real and consequential conflict as a Model UN case. Please take it seriously and listen to people on the ground.

Yana Gitelman is a first-year in the School of Foreign Service.