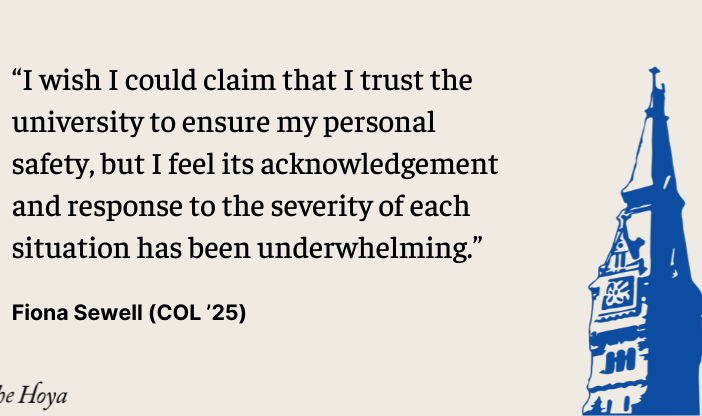 On Jan. 31, the Georgetown University Police Department (GUPD) sent a HOYAlert notifying students of a shooting that had occurred on M Street, only a few blocks from the main campus, nearly two hours after the incident occurred.

Another intrusion occurred the night of Oct. 8, 2021 in the Kennedy and McCarthy Residential Halls. However, GUPD once again sent its HOYAlert a shocking 15 hours after the incident occurred and only alerted residents of Georgetown’s Southwest Quad.

GUPD ostensibly uses HOYAlerts to notify students of any potential threats on campus and in the surrounding areas, yet in my experience there has been a consistent pattern in which the department fails to notify students in a timely manner. Along with a delayed release of information following residential hall intrusions, GUPD has only informed residents of the specific hall involved, rather than circulating the information to the Georgetown community as a whole.

The university must provide Georgetown students with information regarding potential threats in a more timely manner and ensure that it is informing the entire campus community, rather than a smaller, specific group of people.

Since students were only alerted about the January shooting rather than informed on how to navigate the situation, the community was left confused and had difficulty obtaining new information. For example, students raised concerns regarding the shooting with GUPD, but expressed concerns about being able to contact someone directly. However, the onus of requesting an alert should not be placed on students, and GUPD should have proactively alerted the community as early as possible of this potentially life-threatening situation with detailed instructions for how to best take precautions.

The community has raised concerns regarding this lack of urgency and communication from GUPD and subsequent HOYAlerts. Students have spoken up to the university about their concerns regarding precautions the GUPD takes to ensure public safety measures. The stresses of these students have yet to materialize as changes from GUPD. In an email to The Hoya, GUSA Senator Sam Li (SFS ’24) wrote that “While I am not sure additional security measures uniformly applied across campus is the best idea, I do believe heightened security in targeted areas/potential security training sessions for students could be helpful.”

I wish I could claim that I trust the university to ensure my personal safety, but I feel its acknowledgement and response to the severity of each situation has been underwhelming. Because members of the community have not been injured during the listed reports, I feel as though the authorities in question are not making our safety their priority.

Reevaluating student safety techniques is vital, and I call on the university to hire a panel of public safety experts to inform it on how to actively de-escalate tensions during a potentially threatening situation.

Moreover, the university could develop a system in which students receive consistent updates throughout the day, through social media or apps such as LiveSafe, rather than solely relying on text messages and emails to convey these important messages.

While these measures could be great immediate steps to take, in order to see real change, the line of communication between GUPD and the Georgetown community needs to be fundamentally altered in order to implement safety precautions as urgently and comprehensively as possible.

Fiona Sewell is a first-year in the College.