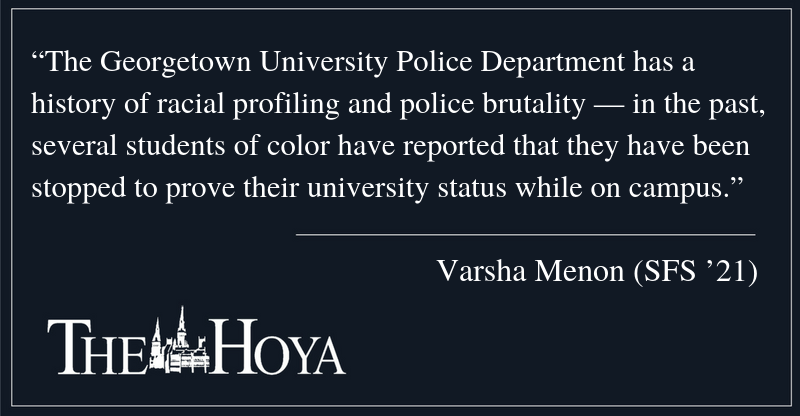 Reporter Kurt Bardella works for Our Daily Planet, is a former Republican turned Democrat and also hosts a country music website called the Morning Hangover. However, that’s not why I know Kurt Bardella.

I know him as the reporter who was accosted by the Georgetown University Police Department on the first day of the Climate Forum 2020, Sept. 19.

My friend and I received press passes to attend the climate change forum and arrived at Healy Hall by 7:30 a.m. to get them. Doors did not open until 8:30 a.m., though, so we waited on the stairs outside Gaston Hall.

At the time of the incident, I knew him as an Our Daily Planet reporter and later described him to my friends as a person of color who was wearing jeans and a “Friend of Our Daily Planet” T-shirt. I only learned his name after he tweeted about the traumatic incident that I and others witnessed.

While we were waiting, we saw Bardella jog up the stairs without a press or staff badge, not noticing the four to five GUPD officers trailing him. As Bardella attempted to explain that he was staffing the event, an officer grabbed his arm and Bardella broke free. Chaos ensued.

We saw the officers pin Bardella to the floor, knocking his glasses off while yelling at him to stop resisting. They put him in handcuffs and only asked if he required medical attention after the fact. Although someone from MSNBC vouched for him, he was still arrested for assaulting an officer. He was eventually released from custody, but whether or not he will face charges is still unclear.

In that moment, I felt the urge to run away, vomit or both. I felt helpless because not only was I paralyzed by fear, but also if I intervened, I would likely get caught in the crossfire.

GUPD’s action of pinning down an unarmed man feels grossly disproportionate to what was a misunderstanding. Maybe Bardella could have been more cooperative in complying with their requests, but nothing he did warranted such a harsh and violent response.

Police aggression and brutality may be a harsh reality that many live in, but that does not mean we should tolerate it. Reading stories of police brutality will always painful, and witnessing them is always traumatizing.

GUPD has a history of racial profiling and police brutality — in the past, several students of color have reported that they have been stopped to prove their university status while on campus. This is why when, a little over a year ago, someone had suggested arming GUPD, people of color across campus became worried for their lives.

These incidents of police brutality and harassment at Georgetown are not isolated, but rather symptomatic of the larger systemic racism that exists within America. When I was growing up, I was always taught to be wary of police officers and to comply with their requests, even when it seemed excessive. For people of color like myself, this was the only way we could protect ourselves. I carried this lesson with me when I came to Georgetown to avoid any tense confrontation that could lead to my arrest.

While the Georgetown administration cannot do much to mitigate police brutality incidents across the United States, it can retrain GUPD in conflict resolution. In a university that values people for others and a community in diversity, we must do better to make all people of color feel safe on this campus. Visitors and students alike should be able to be on campus without having to worry about being stopped arbitrarily by GUPD.

Bardella’s tweets about the incident have since gone viral, and I am now working on a witness statement to help him pursue legal action. Although the incident was and continues to be a source of pain for me, I am writing this article in hopes that it will help Bardella gain closure.

Before we talk about arming police officers on a campus where that has never been warranted, we should tackle the real issues of unnecessary aggression and racial discrimination that exist within GUPD.We must promote strong security on campus while improving the physical and mental safety of students who currently feel unsafe in their presence. Unfortunately, Bardella is not the first to have had such an unpleasant interaction with GUPD. However, if constructive institutional reforms about conflict management are made, he can be the last.

Varsha Menon is a junior in the School of Foreign Service.