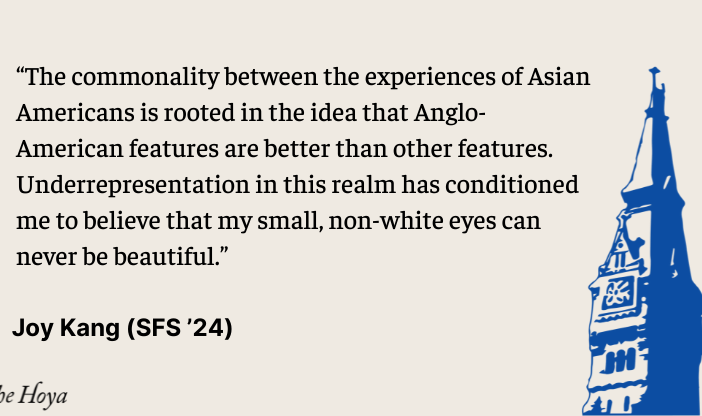 These are a few words that have been used to describe my eyes. To most people, eyes are just another organ, one part of your five senses. But to me, my eyes are one of my most significant insecurities.

The first time I realized that my eye shape was not like the other kids’ bigger, blue eyes was in second grade. Growing up in Indiana as the only Asian person in my class made me stand out among my classmates. One girl asked me if I could see as well as her, and I was genuinely confused because I assumed I could see as well as anyone; she said that she was curious if I could see because my eyes were “so tiny.” That instance was the first time in my life I experienced those kinds of remarks, but it surely was not the last. As I reflect back to those times, I always wonder: what is wrong with small eyes? Monolids can be beautiful. Of course, it has taken me 19 years to come to that conclusion.

During my freshman year of high school, I learned how to apply makeup by watching YouTube. I clicked on the first video that popped up. The makeup artist told me to put the first base of my eyeshadow underneath my “prominent” brow bone. I looked into the mirror with confusion. What prominent brow bone? I was lost, but I continued on with the video. They told me to try drawing my eyeliner based off of the crease of my eyes. More confusion. They told me to apply mascara to accentuate the eyelashes. Her eyelashes were immediately visible. I applied mascara, but my eyelashes were hidden under my hooded eyes. I gave up and assumed that this experience was probably just this one video. But no matter how many videos I watched, I could not find any videos that were suited for my face.

My story may be personal, but the experiences of people who look like me having difficulty learning how to navigate something as ordinary as applying makeup is common. Makeup techniques that are widely used by white people are unlikely to work on Asian faces and, therefore, we have to learn how to do our makeup without guidance. In the United States, we tend to follow Eurocentric beauty standards, a phenomenon that affects all people of color.

The commonality between the experiences of Asian Americans is rooted in the idea that Anglo-American features are better than other features. Underrepresentation in this realm has conditioned me to believe that my small, non-white eyes can never be beautiful. I am still affected by the Eurocentric makeup industry.

After spending 15 years in Indiana, I moved to New Mexico in 2015. New Mexico is a majority-minority state and moving there helped me embrace my features. Georgetown’s Common Data Set (CDS) reports that 244 of the 1,584 first-year students enrolled in fall 2020 identify as Asian. Coming back to a predominantly white community has revived my insecurities. I implicitly find myself falling into the mindset that my eyes, along with my entire being, are not beautiful after hearing a student say to me, “but your eyes are still pretty though! You have so much eyelid space for makeup.”

It has taken me my entire life to come to the conclusion that I should not let racist, Eurocentric beauty standards determine my worth. My eyes are the reason I can see the world around me. The dark brown color of my eyes protects them from sun damage. My eyes represent my cultural background and thousands of years of Korean history. My eyes are part of my Asian American identity. Undoing years of constant self-criticism will take time. I am not asking anyone to tell me I am beautiful, but I am arguing that we all acknowledge that monolids can be beautiful.

On a larger scale, I ask people to reevaluate what they believe is beautiful. Is it genuinely your opinion? Or has society conditioned you to believe that only Eurocentric features are beautiful? I refuse to further conform to the Eurocentric beauty standards that bind me. Asian Americans should not be ashamed of their features. Others should open their eyes to that fact as well.

Joy Kang is a sophomore in the School of Foreign Service.