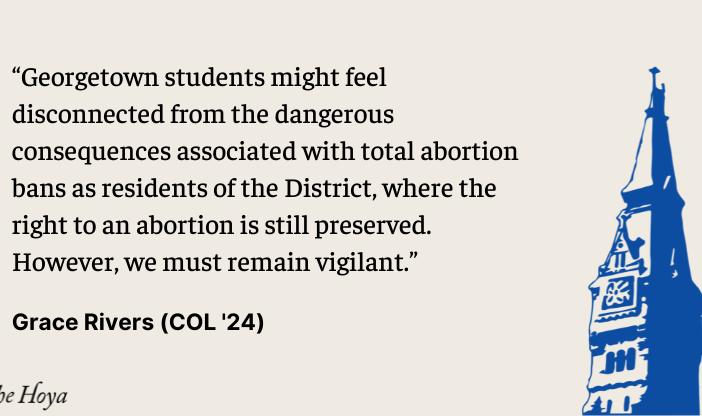 By now, the initial shock produced by the U.S. Supreme Court overturning Roe v. Wade has become a persistent disappointment for feminists as it represents this country’s willingness to jeopardize the health of its women and people with uteruses. I remember photos of Georgetown University students crying and protesting on the steps of the Supreme Court after the decision was released, heartbroken at the new era the court aimed to usher in.

Although these emotional outcries and protests have waned, reproductive activists cannot become numb or passive to what conservatives seek to establish in this country: a widespread criminalization of exercising control over your body. Through silent denial of life-saving miscarriage care and widespread surveillance of physicians, patients and family members of pregnant people, conservatives and the Republican Party are moving to supervise and criminalize any pregnancy that isn’t carried to term. Furthermore, as Georgetown students, we cannot rest assured that the right and access to reproductive care are nonnegotiable, as the Republican Party has the potential to secure majorities in Congress and negatively influence reproductive laws in Washington, D.C.

Approximately 26% of women who know they are pregnant will experience a miscarriage. There are a number of procedures to facilitate a safe and efficient miscarriage, including misoprostol pills, which quicken the process of expelling the tissue of the uterus, and a dilation and evacuation, which surgically opens the uterus to clear its contents.

However, the procedures physicians use to expel a miscarriage are analogous to those for an abortion. Therefore, doctors practicing in states with total abortion bans, such as Alabama, have begun to deny miscarriage health care for fear that the state could prosecute the procedure as an abortion.

The consequences of being unable to receive these basic reproductive procedures are life-threatening.

Left untreated, miscarriages can result in profuse bleeding and sepsis, which has the potential to deprive vital organs of oxygen, causing organ failure. Miscarriage is now subject to prosecution following the Dobbs v. Jackson decision, which significantly endangers the lives of women and pregnant people, despite the process occurring largely outside the pregnant person’s control.

Furthermore, pregnant women, as well as their family members, friends, physicians and anyone involved with their pregnancy, must constantly be wary of the state supervision, as state surveillance of pregnant people will potentially be heightened in the post-Roe era. The case of a pregnant Nebraska teen has gained widespread traction after Facebook released private messages between the teen and her mother, which were obtained by Nebraskan police to investigate her alleged abortion.

In states where there is a total ban on abortion, investigating private data is perfectly legal. If prosecutors suspect the loss of pregnancy was premeditated, they can investigate search histories, private text messages, period-tracking apps and even location data. Thus, any private messages or data could be implicated in criminalizing pregnancy, resulting in the wrongful exposure and surveillance of women’s private health care concerns. This devalues and eliminates privacy when making personal health care decisions and bodily autonomy.

Georgetown students might feel disconnected from the dangerous consequences associated with total abortion bans as residents of the District, where the right to an abortion is still preserved. However, we must remain vigilant.

In a Sept. 9 interview with The Hoya, Georgetown University President John J. DeGioia (CAS ’79, GRD ’95) explained that the university is unwilling to provide resources or information for students to learn more about abortion access in D.C., a move which significantly threatens the lives of women and people with uteruses within the Georgetown community.

While physicians under current D.C. law can openly administer abortion care without fear of prosecution, this ability is subject to change, should the Republican Party gain control of Congress in the midterm elections this year. Republican control of Congress could jeopardize abortion access in the District, as Congress reviews, modifies and can overturn all legislation before it becomes D.C. law. Students cannot rest assured that they will always be able to make decisions related to abortion care with their doctors, as an abortion ban in the District would strip individual physicians’ agency and clinical abilities.

In the wake of widespread criminalization and oversurveillance of pregnancy in states across the nation, we, as students, must be steadfast about circulating abortion and reproductive information amidst the university’s silence, as many people’s lives depend on it.

Grace Rivers is a junior in the College.