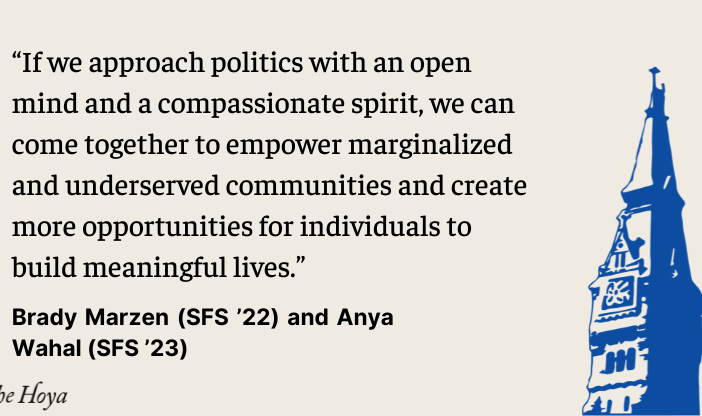 American politics has seen better days. While our public discourse has not yet reached the political chaos of the Civil War era or the civil rights movement, it is certainly more polarized and less civil than any time in recent decades.

Due to increasing ideological differences between Democrats and Republicans and the rapid spread of partisan news, more Americans than ever are taking increasingly extreme viewpoints on almost every issue from gun policy to immigration laws to climate and environmental priorities. This radicalism is a dead end, and if left unchecked, it will cripple meaningful discourse in the United States, a fundamental part of this country’s democratic institutions.

Every American can engage in healthy political discussions by embracing a spirit of public service, maintaining a common sense of decency and utilizing a constructive approach to tackle tough issues. Politics can genuinely work for the people, and its core purpose of improving society is a noble one.

At Georgetown University, students encounter individuals with backgrounds, values and ambitions different from their own. Interacting with diverse perspectives can be intimidating, but actively engaging with different worldviews offers an opportunity for mutual growth. Only through sustained dialogue can we maintain a community of shared values.

In our time on campus, we have found the beating heart of political discourse to be the Georgetown Institute of Politics and Public Service. By providing a space for students of various political affiliations to learn and thrive, the institute has paved the way for a less polarized political environment.

GU Politics offers behind-the-curtain access to the real day-to-day operations of our federal government. In the past, for example, the staff has brought in prominent politicians such as former Secretary of State Hillary Clinton to Georgetown alongside facilitating small-scale, off-the-record discussion groups, as the staff has done with GU Politics fellow Bob Lighthizer (C’69, L’73) who was the US Trade Representative under the Trump Administration. In addition to bringing in practitioners, GU Politics teaches Georgetown students what working in politics looks like. The Institute offers practical career advice through office hours with fellows and career panels in advocacy and lobbying. Students learn specific skills, practicing how to ask tough questions in political journalism and how to operate Facebook advertising. These different sets of programming, in combination, make the Institute a breeding ground for political discourse and a steppingstone into politics for so many students.

Coming from the swing state of Arizona, Anya joined the GU Politics fellows team to become a part of a politically active community. Conversations with Republican students expanded her understanding of cybersecurity policies, while those with Democrats led Anya to reconceptualize police reform. This kind of bipartisan dialogue inspired Anya to change her opinion on a wide range of policies and tested her comfort zones, so much so that she even shifted political affiliations from Independent to Democrat.

Before engaging in GU Politics, Anya hadn’t had any experience in politics or public service. She saw politics as one-dimensional, limited to campaigns and elected office, neither of which Anya was interested in. However, learning from peers and policy practitioners showed her that politics is so much more than that: It encompasses advocacy, lobbying, journalism and more. In truth, politics is public service, and it was conversations across the aisle, which superseded any political contentiousness, that led to that realization. GU Politics has shown her that humanity supersedes politics.

Like Anya, at Georgetown, Brady, a Republican from New York, has seen the best and worst of what politics has to offer. In one case, Brady talked with a fellow student whose father had been in and out of the criminal justice system, and from these interactions, he came to understand the severity of the challenges faced by formerly incarcerated individuals who want to reenter and reintegrate into society.

In Brady’s time working for organizations that impact the policymaking process, Brady has seen firsthand the gridlock, egoism and cynicism that make politics today seem so bleak. At the same time, however, Brady has witnessed how those who are dedicated and kindhearted can bring positive change to our system. If we care about serving others, each of us has an obligation to get involved in politics.

Politics will never be a perfect remedy for all social ills or single handedly cure the polarization in our country. But it can provide hope. If we approach politics with an open mind and a compassionate spirit, we can come together to empower marginalized and underserved communities and create more opportunities for individuals to build meaningful lives.