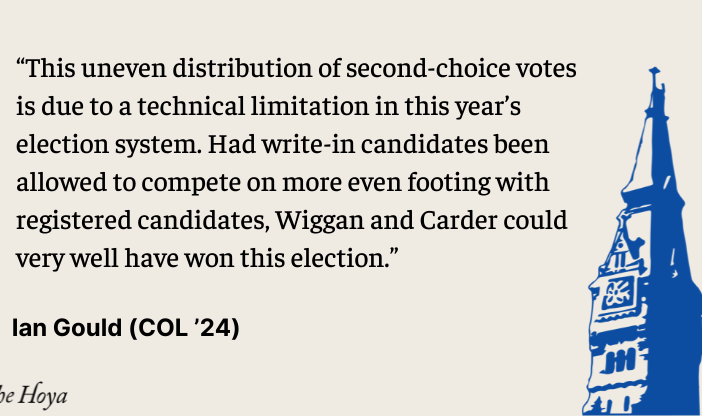 The election was the first in which voters could rank up to three options. Results were tabulated through 52 rounds of elimination with each round disqualifying the ticket with the lowest number of votes. Eliminated tickets’ votes then carried over to the voter’s next choice. 78 of the 138 write-ins ranked someone as their second choice. Thirty-four went to Wolfe-Ume, 44 to Leonard-Khan. Wiggan-Carder (MO), the front-runner, got zero.

This uneven distribution of second-choice votes is due to a technical limitation in this year’s election system. Had write-in candidates been allowed to compete on more even footing with registered candidates, Wiggan and Carder could very well have won this election.

The system was unbalanced because voters were only allowed to write in one candidate. Those 78 voters had already used their write-in slot, so listing MO as a second choice was impossible. Their options were Wolfe-Ume, Leonard-Khan or nothing.

Did this make a difference? Well, recall that Wolfe-Ume got 34 second-choice votes from write-ins to MO’s zero. Wolfe-Ume went on to win, edging out MO in the final round. Their margin of victory? 34 votes exactly.

We also have to factor in the 44 second-choice votes that went to Leonard-Khan. Leonard-Khan was eliminated in the penultimate round, so the ballots they received from eliminated write-ins had to go to their third choice, which again, could not be MO. Therefore, as many as 78 second- or third-choice votes wound up with Wolfe-Ume without ever getting the chance to go to MO. That absolutely could have made the difference.

On Feb. 6, the GUSA Senate moved to extend the petition period — the deadline to get 100 signatures in order to qualify as an official ticket — to allow MO on the ballot. The motion failed 4-10 with several senators absent. If it had passed, it certainly would have freed MO from the formulaic disadvantage I’ve been talking about, but arguing about petition deadlines is besides my point. This isn’t just about MO. If the ballot rules don’t change, every future write-in ticket will be hamstrung by the ranked-choice voting system.

One way to make the system more fair is to remove the petition requirement and just let everybody on the ballot, regardless of how little support they have or how close the election is. But, because that would probably make for an impractically large ballot, it would be more feasible to allow voters to rank up to three different write-in candidates.

Granted, that would require a lot of extra work from the Election Commission, whom I wholeheartedly commend on every other aspect of this election. Personally, I’m willing to wait longer for election results if it means the process is more fair, but maybe all that labor should be compensated in some way? Just a thought.

Some may argue that this particular election was an anomaly — that write-in candidates rarely stand a chance and that changing the rules to make it easier for them is wasted effort. Running a write-in campaign already has several disadvantages that are not inherent to this GUSA election. Their voters have to make an extra effort, and given that they aren’t included in the debates, write-in candidates often struggle with name recognition and exposure. Are we to resolve those as well?

I would respond that most obstacles facing write-in candidates stem from the simple realities of democracy. It’s okay that some voters stick to registered candidates because they think they’re the only ones who stand a chance. It’s okay to cap the amount of candidates in a debate in order to maintain an orderly and substantive discussion. In other words, it’s okay for write-ins to suffer under circumstances we can’t change. But it’s not okay if our voting system creates unnecessary roadblocks that end up costing someone the election.

The results have been certified, we have our new GUSA executives, and nothing I have written gives enough standing to call this election “illegitimate.” But the electoral rules regarding write-in candidates on ranked-choice ballots must change so this kind of controversy doesn’t happen again.

Ian Gould is a sophomore in the College.