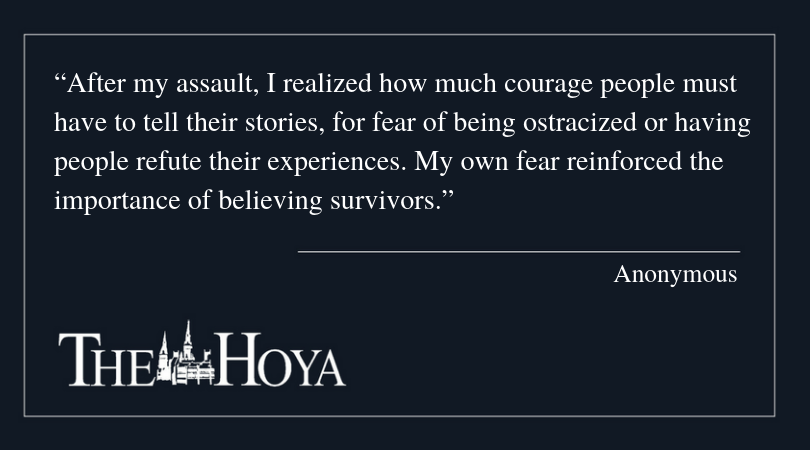 This Viewpoint discusses sexual assault in the Georgetown neighborhood. Please refer to the end of the article for on- and off-campus resources.

After my best friend was raped last year, I thought a lot about what I would do in a similar situation. Would I scream? Try to fight back? When I was sexually assaulted a few weeks ago during the Brett Kavanaugh confirmation hearings, I did something I never predicted: I froze.

I had never been to a club, let alone had a random guy dance with me. I typically avoided parties for fear of getting too drunk and/or having someone take advantage of me in an unfamiliar environment. I was afraid of being a statistic, and after hearing many survivors’ stories, it didn’t seem like most people got justice — or that others even believed them. After my assault, I realized how much courage people must have to tell their stories, for fear of being ostracized or having people refute their experiences. My own fear reinforced the importance of believing survivors.

Lots of people were drinking at my friend’s Tombs night, but I stayed completely sober. At El Centro on Wisconsin Avenue, my friends and I danced in a circle in the middle of the bar when a large man came out of nowhere and grabbed my hands, pulling me in tightly.

We started moving in a circle. I tried signalling to my friends, but they didn’t see me. I was confused and struggled to speak. Should I tell him that I have a boyfriend, or that I’m not interested? Before I could say anything, he started squeezing me so tightly, and then forcibly kissing me. Unable to breathe, I just stood there, praying that it would be over soon. Thankfully, one of my friends eventually saw what happened and pulled him off of me but the damage was done. My friends watched in horror. He disappeared into the shadows.

We left, and I remained in shock over what happened. My friends were sympathetic, but I wasn’t sure what to do.  I felt guilty for letting a man violate me while I stood there. One of my friends, who is studying psychology, explained that my response was natural, and that it wasn’t my fault, but I felt powerless. Why didn’t I scream or try to break free?

I called El Centro two days after. The manager offered me free food but said he couldn’t do anything — management refused to release the video footage from that night. Lacking confidence in finding justice, I wanted to talk to a professional. Another friend recommended I talk to Health Education Services. They responded to my email quickly, and I set up an appointment for a couple days after the incident.

Speaking with a HES staff member is one of the best things I could have done. She helpfully explained that yes, freezing is a natural reaction, but that the man had no right to do what he did in the first place. Her help made me feel less guilty about what happened and helped me with the healing process. She explained different options for reporting the assault and answered questions I had about telling people, including my parents and the guy I was seeing. The story was mine to tell, if and when I felt comfortable.

So, I am telling you all my story now, amid one of the most polarizing political times in U.S. history, and I am asking you to please believe survivors. Whether their trauma happened 50 years ago or yesterday, a survivor will never forget what happened to them. Despite eyewitnesses and evidence, I will probably never get justice for what happened to me.

Still, I also don’t want this incident to define my senior year. I am trying to move forward one day at a time. If something similar — God forbid — ever happens to you, know that you are not alone, and that there are many resources available. Most important, know that it is absolutely not your fault.

Resources: On-campus resources include Health Education Services (202-687-8949) and Counseling and Psychiatric Services (202-687-7080); additional off-campus resources include the D.C. Rape Crisis Center (202-333-7273) and the D.C. Forensic Nurse Examiner Washington Hospital Center (844-443-5732). If you or anyone you know would like to receive a sexual assault forensic examination or other medical care — including emergency contraception — call the Network for Victim Recovery of D.C. at 202-742-1727.  To report sexual misconduct, you can contact Georgetown’s interim Title IX coordinator at 202-687-9183 or file an online report here. Emergency contraception is available at the CVS located at 1403 Wisconsin Ave NW and through H*yas for Choice. For more information, visit sexualassault.georgetown.edu.

The writer is a student at Georgetown University.

The Hoya is taking the rare step of publishing an anonymous Viewpoint. We have done so at the request of the author, a survivor of sexual assault whose identity is known to us and whose safety could be jeopardized by its disclosure. We believe publishing this Viewpoint anonymously is the only way to deliver an important perspective to the Georgetown community. We invite you to submit a question about the Viewpoint or our vetting process by contacting the Opinion Editor at [email protected]