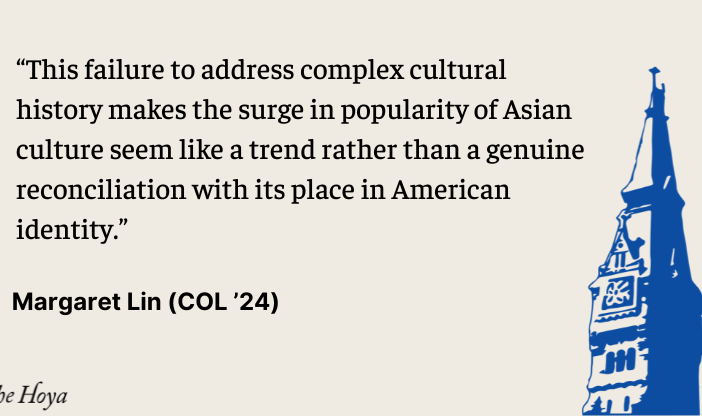 We might have predicted it from Pokemon cards, anime or even the adoption of instant ramen as the ubiquitous college kid staple: Asian is the new cool.

The mass popularity of “Shang-Chi and the Legend of the Ten Rings,” “Squid Game,” Dalgona whipped coffee and Korean BBQ seem to point to tangible progress in American public acceptance of East Asian culture. Many Asian Americans I spoke to claimed this was an objective good: that the ever-elusive idea of “Asian representation” was finally beginning to materialize. Even I bought in and spent all my meagre tutoring money at overpriced theaters — totally justified in support of the Asian American community. Class elitism aside, “Crazy Rich Asians” was the all-Asian comfort movie family friends and I would rewatch every Thanksgiving, huddled in a cozy basement den.

Each heady peak, however, cast its own shadow. Yakult, the sweet yogurt drink favored by Asian teens, experienced a multifold price increase after the release of the Netflix hit “To All The Boys I’ve Loved Before.” Enthusiasm for K-pop idols peaked public romantic interest in — and the fetishization of — East Asian men. The immense trendiness of Chinatown and Koreatowns has resulted in equally immense gentrification that has pushed out the community’s original residents. Mahjong and congee, two Chinese cultural staples, have been co-opted by white American women in the form of companies like The Mahjong Line, which claim to refresh mahjong tiles with more “fun” symbols like bubbles and bags of flour, and Breakfast Cure, which markets congee with “improved” flavors such as apple cinnamon and chai. Whenever I encounter this particular kind of “appreciation,” I find myself unavoidably (and guiltily) thinking: Can’t we have anything for ourselves?

It is difficult to not feel “ungrateful” when criticizing the expansion of Asian culture into the greater American public. As several millennial authors have put it, the current state of affairs has infinitely improved from the pre-2010s, an era filled with elementary school mockery of “weird-smelling” lunches and one-dimensional tropes like the football coach kissing Trang Pak in “Mean Girls.” It’s cool now to bring kimchi to school. However, even these authors express a feeling of dissociation. Those cafeteria bullies now eagerly post their “authentic” Asian meals on social media without a hint of self-awareness or remorse for their previous behavior.

This failure to address complex cultural history makes the surge in popularity of Asian culture seem like a trend rather than a genuine reconciliation with its place in American identity. While “Asian representation” is making millions for Marvel, Asian Americans are dying of violence in the streets from racist attacks based on myths surrounding the COVID-19 pandemic.

In grappling with the “Asian explosion,” we might have to come to terms with our own expectations. In reality, big box-office movies like “Crazy Rich Asians” and “Shang-Chi” could never be made just for me. Relying on commercial products like Hollywood movies as a marker of progress is a flawed mechanism because these films inevitably replicate the same racial hierarchies as their (majority white) audiences. We can both celebrate Asian public success and critique the underlying structure that enables people like the interviewer who ignorantly asked
“Squid Game” star Lee Jung-jae — a longtime South Korean celebrity — what it felt like to have people recognizing him for the first time.

Asian Americans are not the only ones who have grappled with a transition into visibility. Frank Bruni of The New York Times writes in an article, whose title inspires this own’s, about a conversation he had with gay playwright Mart Crowley about the disappearance of a distinct “gay identity” in conjunction with the rise of LGBTQ public visibility. He writes, “When a culture is shaped by fear and discrimination and they fade, so does the culture.”

Crowley’s response is emphatic: “Everything costs something. You wouldn’t want that world back.”

Bruni’s acknowledgement is more ambiguous: “‘I wouldn’t trade any of the progress,’ I said to him. ‘And yet.’”

“And yet” is perhaps the appropriate response to a multifaceted Asian American public identity that is rooted in deep nostalgia and is gaining fast traction.

Maggie Lin is a sophomore in the College.