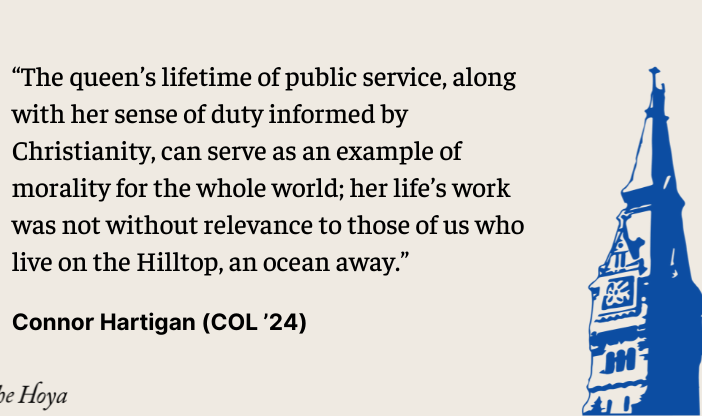 The passing of Her Majesty Queen Elizabeth II of the United Kingdom last week marked a watershed historical moment. It may well turn out to be one of the most consequential dates of the 21st century.

She occupied many functions, most notably those of head of state of the United Kingdom and supreme governor of the Church of England. In the days following her death, I have reflected on her role as an influential figure of Christian faith. Throughout her life, the queen’s faith in Christ translated into an unwavering commitment to the service of her people which can inspire us all, especially Georgetown University students receiving a Jesuit education.

The queen’s lifetime of public service, along with her sense of duty informed by Christianity, can serve as an example of morality for the whole world; her life’s work was not without relevance to those of us who live on the Hilltop, an ocean away. Some secular-minded critics might have objected to seeing a head of state — unelected, no less! — incorporate religion so integrally into her thought. In the eyes of many, any interaction between Church and State would necessarily lead to disaster. Yet the queen’s Christianity helped her, rather, to form her own moral code; it was the basis and the bedrock for her lifetime of service to others.

Her service was always informed by her faith, of which she spoke without braggadocio or showmanship.

“I declare before you all that my whole life, whether it be long or short, shall be devoted to your service…God help me to make my vow, and God bless all of you who are willing to share it,” then-Princess Elizabeth vowed in a 1947 radio address.

She often made her personal beliefs and values most explicit in her annual Christmas speeches, in which she specifically emphasized the relationship between faith, service and self-giving.

And she touched upon a beautiful thought in her 2016 allocution: “Christ’s example helps me see the value of doing small things with great love.”

“Small things with great love” — this concise phrase best encapsulates the queen’s life. Despite the pomp and grandeur of the monarchy, most of the queen’s duties were decidedly down-to-earth: cutting ribbons at the opening of new hospitals, writing letters to Britons on their 100th birthdays, or shaking hands with throngs of well-wishers during visits to small towns in the English shires. Yet, for 70 years, she never abandoned her task of service, even when it demanded sacrifice and self-abnegation. I am particularly struck by her 2012 meeting and handshake with Martin McGuinness, an Irish Republican Army guerrilla commander at the time of the organization’s fatal attack on her cousin, Lord Mountbatten, was a significant gesture of reconciliation, and constituted a sterling example of Christian forgiveness. Echoing the call of St. Francis of Assisi — “Lord, make me an instrument of your peace” — she made a public gesture of goodwill in the interest of forging concord in a fractured land. This moment alone makes me reflect on my own conduct; if the queen could forgive a man implicated in a grievous wrong done against her family, who am I to hold petty grudges?

I have long sought to follow her model in my own daily life, particularly in my work with Catholic Music Ministry at Georgetown. For example, to embody the value of doing small things with great love, I might participate in a jubilant choral anthem at Sunday Mass, which requires hours of preparation every week. Even when we may prefer to take that time for ourselves, we do this work so that we might touch the hearts of others.

We cannot all be British royalty, but one of the queen’s most important functions was to serve as a role model for decent Christian behavior. Her lifelong task was to be a woman for others, even to the extent of subsuming her individual self into the role of official symbol. Her example carries profound meaning even beyond the Anglican Communion. Here at Georgetown, students learn from Jesuit teachers and mentors that they are to be, in the words of Fr. Pedro Arrupe, S.J., “men and women for others.” Students certainly have much to learn from their own Catholic and Jesuit exemplars, from St. Ignatius of Loyola to Arrupe to the many deeply faithful and selfless Jesuits we encounter on campus every day. But perhaps a model of Jesuit values — here, again, the pursuit of reconciliation shown in the queen’s gesture of peace in Northern Ireland comes to mind — can be found in the ostensibly unlikely person of an Anglican monarch. Those who seek to enter public service might also reflect upon what they can learn from the ethic of a woman whose position came from the very opposite of careerism.

As she promised in 1947, the queen lived out the Christian values of duty, service and peacemaking, even at moments when the royal family faced grievous personal tragedies. In this moment of profound sorrow and dislocation for the United Kingdom, I grieve with the British people. We, too, have something to learn from her faith and her decency. We, too, have lost a beacon.

Connor Hartigan is a junior in the College.