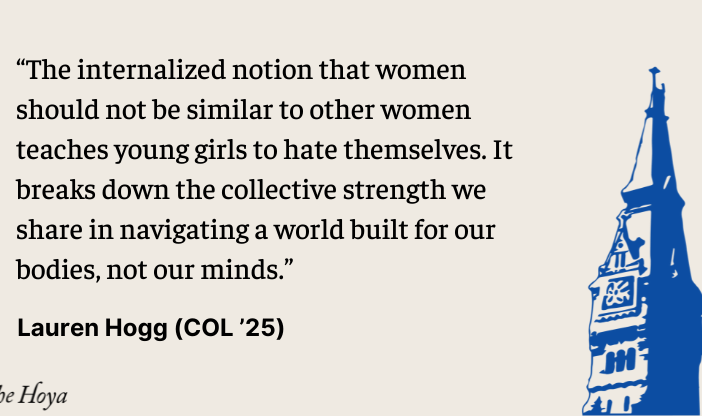 When I was seven years old my mother told me that to be born a woman was to be born cursed. At first, I didn’t understand — I spent days pondering what this meant, feeling my temples for any budding horns, checking my pillowcase for snake skins. Little did I know that the “curse” she spoke of was much more insidious — it hid behind the dishwasher and in the corners of rooms we were not allowed into alongside men.

Misogyny is no curse — it is something real and tangible. The complicated truth about misogyny is that some of the most heinous perpetrators of anti-women stereotypes are women. The origins of this self-hate come from outside of ourselves. The hate that women spew when chastising other women comes from a society that tells us that our only worth is how desirable we are. From a young age I bought into this false conviction, the belief that my role alongside other women was only in competition with them.

The internalized notion that women should not be similar to other women teaches young girls to hate themselves. It breaks down the collective strength we share in navigating a world built for our bodies, not our minds.

Throughout my childhood I encountered uncomfortable and disturbing experiences that placed me on both ends of the spectrum, as the chastiser and the chastised. I still recall being a little girl and leaning over to my mom to point out a woman walking by to reassure my mom that I would never dress in such a revealing manner. Where does a five-year-old girl learn to slut-shame women?

In middle school manners class, other girls pulled me down into my chair when I tried to get up, reminding me that only my male date was allowed to fetch me water.

These moments stained my childhood like ink does paper — innocent but dark, permanent yet persistent.

When I was 11, like many girls, nature forced womanhood upon me, as I had my first period. I was filled with confusion and anger, told to stay quiet for a week and simply just let it pass. Women bleed and are expected to smile through it. This period of adolescence hurts for many girls, but it was also then that I first experienced the secret language of female comradery. At this age girls begin whispering questions to each other, the things we can not say aloud because we are told by society that our bodies and what they do are shameful. I realized at 11 just how wrong I had been about other women.

My mother mentioned the stories of my grandmothers’ lives when we were alone together. She spoke about our female relatives who were forced marry young, women who were forced to carry children they didn’t want and my aunts, grandmothers and sisters who were beaten when their boyfriends found out that the procedure they had done by the family doctor was not to remove their tonsils but to remove something much more consequential.

At 13, the first time I kissed someone, the boy came up for air only to tell me “I wasn’t like other girls.” This statement broke me. What he didn’t understand was that I carried the strength of my female lineage on my back. For him to deny my similarities to these women as a form of compliment insinuated that I would not want to be like other women. Of course I want to be like other women. Other women in my life are strong and soft, stern and gentle, loud but receptive and overall badass.

Women give birth to nations while their husbands get credit for state building. Women stand unabridged as the world collapses upon our shoulders and women hold each other’s hands while we experience both the greatest pains and the most euphoric joys of human life.

Women’s power is often mythologized, but it is something so essentially human. I do not believe that to be born a woman is to be born cursed. I do believe, however, that there is an unparalleled power that lives inside women from the day we are born — not a natural strength but an acquired one that can only be sustained when we realize that we are not competitors — we are teammates.

Lauren Hogg is a first-year in the College.