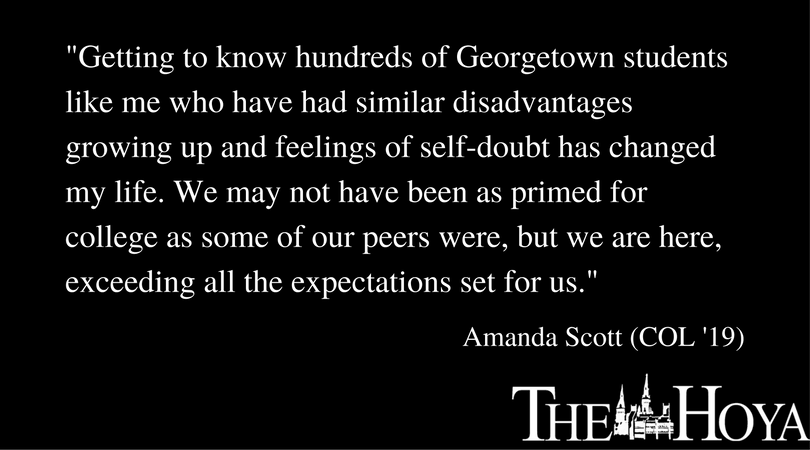 If you were raised in an upper — or middle — class family and your parents went to college, think about what your family and school counselors told you about college growing up.

You were likely told to start preparing for your college application in your junior year of high school, take advanced classes and participate in extracurricular activities to boost your resume. You may have been told that if you worked hard enough, you could go to any college you wanted.

Students like myself who grew up in lower-income families with parents that never attended college are often not expected to go to college and are thus unprepared.

We often do not know how to write a good personal statement or apply for financial aid until we fill out the application by ourselves. Without proper guidance and access to resources, low-income, first-generation students like myself not only face barriers to college, but often do not realize that college is an option for them. But persistence and a strong support system, like the Georgetown Scholarship Program, enable us to overcome these obstacles, even if we never expected ourselves to be here.

I was born and raised in a working-class family in rural Alabama. My mother graduated from high school but ended up working odd, low-paying jobs while my father quit school in the ninth grade and worked as a sandblaster at naval shipyards. My parents could not send me to a preparatory high school or hire private tutors to assist me with standardized tests.

No one expected me to go to college, much less one as prestigious as Georgetown.

Once I did start weighing college as an option, I only considered a few colleges. I thought the University of Alabama and Auburn University were schools I could not even get into because only the smartest kids in the state went to those universities, and I was not sure I was one of them.

I had been homeschooled after the fourth grade and ended up earning my GED, so I had no conception of advanced placement classes nor class rankings, much less of their roles in college applications. I thought I could not go to college because I did not attend high school. When I did apply to college, I only applied to the nearest community college. Only after maintaining a perfect GPA there did I begin to realize my academic abilities.

Once I started applying to transfer, I did not know about need-based scholarships, and I could not ask my family for help as they had never gone to college. Only after near-daily calls and trips to the financial aid office was I finally able to figure it out.

Still, when I scheduled appointments with my counselors at my community college about my transfer options, they only told me about schools in Alabama. When I told them that my top choice was Georgetown, they steered me towards more regional universities. But by then, I had demonstrated my academic potential and gained confidence in myself. I was determined to go to my dream school — and I did.

Guidance and resources to help low-income, first-generation students understand and apply to top universities are critical not only at universities themselves, but in the preceding steps, as they could make or break a student’s decision to apply to college.

The most important thing that I learned, though, is that there is a large community of students like me across the nation. Here, it is GSP, which helps first-generation and low-income students through financial assistance, mentoring and a supportive community.

This type of support for low-income or first-generation students are vital not only at universities such as Georgetown, but also in high schools and smaller community colleges, where they can determine a student’s ability to go to college.

Getting to know hundreds of Georgetown students like me who have had similar disadvantages growing up and feelings of self-doubt has changed my life. We may not have been as primed for college as some of our peers were, but we are here, exceeding all the expectations set for us.

Amanda Scott is a junior in the College.