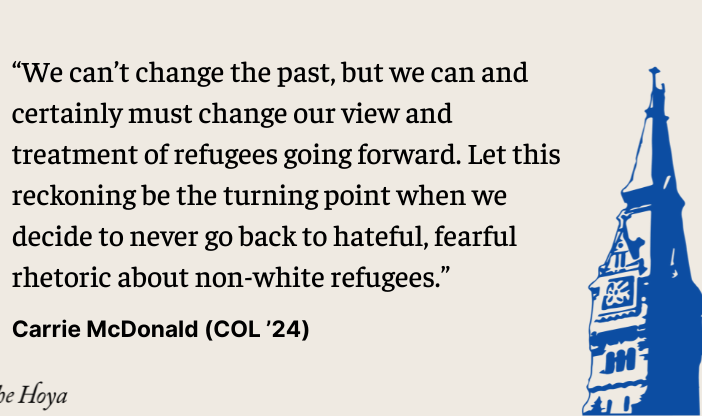 In the weeks before Putin launched his brutal invasion of Ukraine, Poland began constructing a new 18-foot-tall border wall designed to shut out thousands of Kurdish and Yazidi refugees stranded in freezing conditions on the Belarusian border.

Four weeks into the invasion, Poland has welcomed over two million Ukrainian refugees with open arms.

The world has been quick to support the over three million people fleeing conflict in Ukraine, yet we rarely extend the same hospitality to Black and Brown refugees. The international community seldom treats them with the same level of dignity, respect and humanity.

The international community’s response to the escalating Ukrainian refugee crisis is laudable. Ukrainian refugees are fleeing unimaginable violence in their country and they deserve the safe haven that other countries have granted them.

The response to this refugee crisis should be precedent-setting, and the international community should always welcome refugees with open arms — not just when they’re white. In reality, that is rarely the case.

For example, when millions of Syrians were forcibly displaced by an ongoing civil war that began in 2011, the world ignored their plight. An ugly wave of hateful anti-immigrant populism descended across Europe as refugees washed up on its shores.

In my home country of the United Kingdom, I watched as millions self-destructively voted for Brexit in 2016, grasping onto the idea that this xenophobic move would finally allow the United Kingdom to fortify its border from refugees.

This issue is certainly not isolated to Europe. Six months ago, U.S. authorities met Haitian refugees with violence and human rights abuses at the southern border when they sought safety.

Thousands of people from Mexico are denied their legal right to seek asylum and are forced to wait along the border, in the very country from which they are trying to flee, or are expelled before they have the opportunity to make their case in court — a right guaranteed under international law.

The list of injustices goes on and on. The world has consistently found the suffering of Black and Brown refugees more palatable as it has grown accustomed to witnessing their suffering. Tragedy after tragedy, shipwreck after shipwreck, death after death — the public has also grown numb to these tragedies. But with Ukraine, the international community has chosen to act because images of white refugees have woken them up to the civilian cost of war.

We can’t change the past, but we can and certainly must change our view and treatment of refugees going forward. Let this reckoning be the turning point when we decide to never go back to hateful, fearful rhetoric about non-white refugees.

I urge the Georgetown University community to use this moment as an opportunity for introspection. Examine your racial biases and look beyond whatever image of a refugee you might conjure up in your head. Refugees are not a monolith — forced displacement can happen to anyone regardless of factors like race, age, gender, religion or ethnicity.

Use your power, your voice and your privilege to call out prejudice. Whether it’s a casual conversation with friends and family or President Biden stressing the need to “secure the border” during his 2022 State of the Union address, challenge others to reflect on how their words are harmful and can erase the experiences of Black and Brown refugees.

Support organizations that provide much-needed aid to Ukrainians, but also recognize that there is so much to be done locally. The work supporting refugees did not begin and will not end with just one conflict. Their stories do not end with crossing a border. Refugees remain displaced, on average, for 20 years and are thus in need of long-term support with navigating a new culture, language and life. Refugee resettlement agencies are chronically underfunded and understaffed, which means they rely on community support. Whether it’s by sorting through donations, tutoring or mentoring children, teaching English or financial literacy classes, I urge you to turn your outrage into tangible action.

Stand proudly with the Ukrainian people, but don’t forget the over 84 million people who are forcibly displaced around the world. Let the way in which the world welcomes Ukrainian refugees serve as a model for how we treat all refugees going forward.

Carrie McDonald is a sophomore in the College.