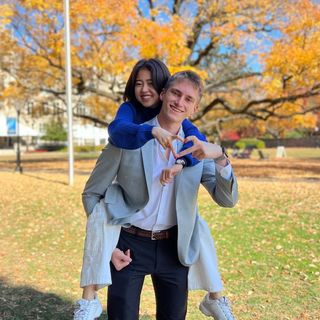 Vincent and Hirai campaigned on their institutional experience in GUSA and plan to continue working on projects such as the Metro U-Pass, which gives students free access to all WMATA transportation services; the Collegiate Readership Program, which aims to give students free access to several major news publications; the InterHall council, a student ​​advocacy board whose goal is to improve residence life; and more.

Vincent said the relationships Hirai and he have already established with administrators and student leaders will make their transition into their roles easy after they take office Dec. 4.

“A lot of groundwork that usually has to take place the first couple of months into the executive term has already been laid, allowing us to hit the ground running on various projects and focus on other important work that comes with the executive positions,” Vincent wrote to The Hoya.

The senate confirmed their new members and elected Fazal as speaker and senator Alicia Gopal (COL ’25) as vice speaker of the senate, respectively, at a Nov. 13 Senate meeting. They also held elections to determine the chairs and vice chairs of the Policy and Advocacy Committee (PAC), Finance and Appropriations Committee (FinApp), Ethics and Oversight Committee (E&O) and FinApp liaisons and adjuncts, who coordinate policy with other committees.

Ahmad said during her term she will work to ensure GUSA promotes the work of other student organizations.

“There are so many groups on campus advocating for workers’ rights, against discrimination, and for so many other causes, and I hope GUSA can be a platform to amplify those advocacy efforts,” Ahmad wrote to The Hoya. “I know that GUSA doesn’t have a great reputation in the student body right now, and I hope that my fellow senators and I can change that with our advocacy.”

Despite losing, Pasieka said she and Achebe hope they can continue to make positive changes on campus.

“Obviously we were in it to win, but we’re grateful for the opportunity to talk with so many Georgetown students about what really matters to them,” Pasieka wrote to The Hoya. “We’re excited to use those conversations to make a difference even without the executive title.”

Woodall and Cariani did not respond to The Hoya’s requests for comment.

Following the opening of the polls, both The Hoya and The Voice rescinded their respective editorials that had endorsed the Vincent-Hirai ticket and cited a lack of sufficient time to investigate Hirai’s involvement in Georgetown’s chapter of Network of enlightened Women (NeW), a conservative women’s association. On Nov. 14, NeW hosted Riley Gaines, a swimmer who has spoken against the inclusion of transgender women in women’s sports.

Hirai told The Hoya and The Voice that she is not and has never been a member of NeW.

Hirai did not attend the speaker event and denied any involvement in the club beyond attending social events hosted by NeW, most recently on Sept. 18.

“I, along with Camber, support transgender rights on campus and will commit to communicating that to our community through my actions as vice president,” Hirai wrote in an email to The Hoya.

Vincent said his administration will work to support transgender students, including by pressuring the Office of Residential Living to create more inclusive housing policies.

“Currently, the university chooses to apply policy on a case by case basis,” Vincent wrote. “We would like them to include explicit statements that students who identify as transgender, non-binary, or gender fluid will be assured housing with a roommate of any gender identity of their choosing or access to a single upon request.”

This article was updated on 11/18 to correct the name of the vice-speaker of the GUSA senate from Joshua Bernard-Pearl to Alicia Gopal.