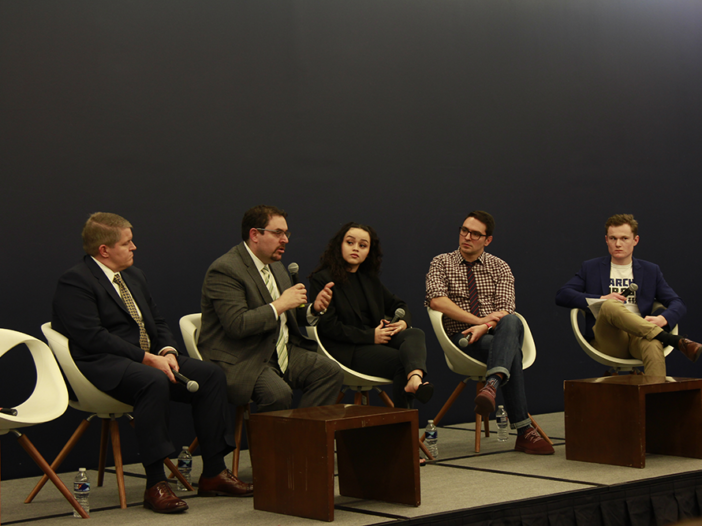 Policymakers and gun reform activists emphasized the disproportionate effect of gun violence on marginalized communities at a Nov. 19 event.

Rep. Robin Kelly (D-Ill.) was scheduled to join the panel but was unable to attend and was replaced by Igor Volsky, the director of Guns Down America, a gun reform organization known for its strong opposition to the National Rifle Association.

Murphy recounted a personal experience about a school he visited in Sandtown, Baltimore — a primarily black community — that went into “code green” during his visit, meaning an active shooter was several blocks away. The experience helped Murphy understand the horrific psychological effects shootings have on children, he said.

Baltimore has one of the highest rates of gun violence in the country, with over 500 people shot in nonfatal incidents and more than 150 killed as of July 2019, according to the Baltimore Sun.

Gun violence takes a high emotional toll on people’s lives, especially young people, who face the risk of dying young from gun violence in some communities, according to Cruz, a resident of northeast D.C. and a senior at BASIS D.C. Public Charter School.

“It seems like the media only cares when white kids die and I’m like, that’s unfair, because I feel as though black and brown kids deserve to live,” Cruz said. “Just because of the opportunities we aren’t given in a system that suppresses, is it really that fair that we won’t be able to live?”

There are nearly 33,000 gun deaths in the United States annually, and nearly one-third of these are homicides, based on averages from 2012 to 2014. Black Americans are victims of gun violence at significantly higher rates than other racial groups, with a rate of 16.7 homicides per 100,000 people, compared to 1.5 homicides per 100,000 white Americans, according to Five Thirty Eight.

“Frankly, it wasn’t until suburban white students started getting shot up that all of a sudden people started to care,” Sakran said.

“The good news is this country is waking up,” Murphy said. “What we have become in a short six-year period of time is more powerful than the gun lobby. We have more money, we have more activists, we have more voters that care about our issues.”

Just four years ago, politicians were not having the same in-depth conversations about guns that they are having today, according to Volsky.

“For a long time, politicians from both sides of the aisle, but certainly from the left, felt that talking about guns was a big liability,” Volsky said. “But what’s happened since is that, really, a growing realization that young people like you care about this issue and that you will vote based on this issue.”

Educating the Georgetown community about the levels of gun violence in marginalized communities in D.C., as well as across the nation, is critical, according to James Benner (SFS ’21), a member of the Georgetown chapter of MFOL and one of the organizers of the event.

“Unfortunately ,there are high rates of gun violence in other sections, particularly in communities across the river that I think goes unnoticed by the Georgetown students and the Georgetown community,” Benner said. “The main purpose of this event was just to bring in some of those voices who have experiences and who live in those communities who are regularly affected by gun violence.”