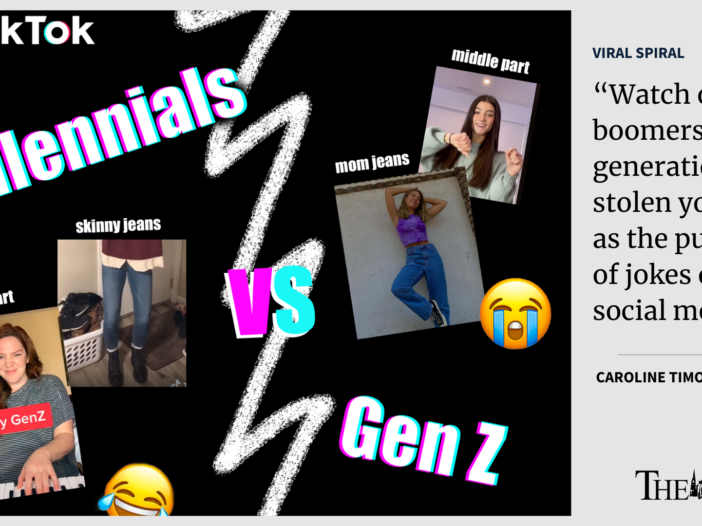 Watch out boomers, a new generation has stolen your spot as the punchline of jokes on social media. Be it skinny jeans, side parts, saying “adulting” or using dated emojis, millennials have recently been called out for sticking to trends popular in the early 2010s. As comedian and millennial Joel Kim Booster recently tweeted, “What is being a millennial on TikTok but corniness persevering.”

The conversation on generational differences began as a joke, but recently, some users seemed to take the jests to heart. Much of the recent conversation has stemmed from a series of viral videos in which millennials wrote their own diss tracks to defend their generation from the vitriol of Generation Z.

TikTok user @callmeriss posted a now-deleted version of “I’m Proud To Be an American,” changing the lyrics to “I’m proud to be a millennial, with my side part and skinny jeans” and ending with encouragement for Gen Z to stay in their lane. A duet claiming “this [parody] is the scariest video I have ever seen in my life” is filled with comments questioning why millennials are so obsessed with trying to assess their superiority over Gen Z.

Another millennial TikTok user, @cassiesmith607, wrote her own rap to defend Eminem, who she alleged is in the process of being canceled by Gen Z. This video, which had similarly angry energy to the “I’m Proud To Be an American” parody, gained traction on Twitter and was even reposted on the Barstool Sports Instagram account. What made commenters cringe was not just how offbeat she was but the claim millennials invented Wifi, despite the technology behind WiFi being patented in 1941 by actress Hedy Lamarr and later perfected in the 1990s by Australian engineers from the Baby Boom generation.

Other creators were quick to hop on this trend, with TikToker @mammybanter writing a particularly cringe-inducing millennial anthem to the tune of Lizzo’s “Boys” where instead of talking about liking a variety of men, this parody tells the viewer, “I like skinny jeans/and my side part.”

The audio of her song quickly resulted in a trend where Gen Zers would film themselves reacting to the parody. The song got so much attention that user @mommybanter deleted her video after receiving a barrage of negative comments. She has since posted a video claiming viewers failed to understand her video was meant to be ironic and aimed at poking fun at those who take the generational battle seriously.

According to a study by Ignite Social Media, millennials are outnumbered on TikTok with Gen Z making up 42% and millennials making up 34% of the platform’s user base. Since Gen Z outnumbers millennials on TikTok, the backlash toward cringy millennial content is amplified.

Although these parodies are new, generational differences have been a topic of conversation on TikTok for over a year. Generational divides are completely arbitrary, with millennials including anyone born anytime between 1980 and 1995 and Gen Z encompassing anyone born between 1995 and 2012. The year cutoffs vary depending on the source and how exactly these years are decided is similarly murky. Despite these unofficial limits, social media has jumped on the opportunity to discuss perceived divides.

As a social media site dominated by Gen Z, TikTok has become a place for this cohort to define its identity as it ages into cultural significance. I don’t think most creators posted TikToks about side parts to establish what Gen Z is in comparison to millennials, but all the videos work together to form the social construction of what defines a generation.