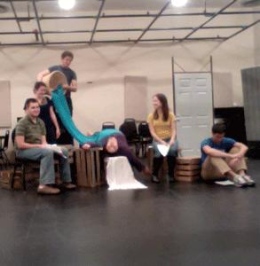 It was 9 o’clock on a Monday morning, and Miranda Rose Hall (COL ’11) was  —  quite noticeably — the most excited person in the Intercultural Center galleria. The large thermos of coffee in her hands was fitting as she spoke of her recent senior thesis project, “The Orphan Play.”

The 2010-2011 academic year marked the first time in the theater and performance studies department’s five year history that it had invited students to stage their original work in the form of a formal thesis project. The department began accepting applications for the program last year.

“There were two that were outstanding. And we ultimately said yes to both of them,” Program Director Maya Roth said of Hall and Courtney Ulrich (COL ’11).

“It starts with a proposal,” Hall explained. After pitching her proposal, she embarked on two trips. The first was her study abroad stay in France; the second, a week-long trip to Arizona to do “some on-the-ground research” for the project. The next six months were followed by numerous drafts and staged readings in preparation for the final performance.

The play, she went on to explain, was inspired by a story she had read in her women’s history class about an orphan abduction in Arizona. In 1904, 40 Irish orphans were sent from a New York City hospital to a Catholic priest in Arizona. The father told the nuns who owned the hospital that he knew of many good Catholic families who would welcome the children into their homes. These families, he said, would be willing to take in the orphaned children. Upon arrival, the children were placed in the care of various local Mexican-American families.

The priest had not anticipated this being a problem, but the resulting history revealed a social fabric torn by racism and hardship.  The white families who lived in the area were enraged that the Irish children were given to Mexican-American families. Within 24 hours, they had formed vigilante squads to kidnap the children from their adoptive families, corralling them in a hotel and eventually redistributing them among the white families in the area.

Three months later, the New York hospital filed a suit against one of the abductors. The case eventually reached the U.S. Supreme Court and in a sign of the times, the court’s decision sided with the vigilante groups — leaving broken families in its path.

“I found that and thought, ‘Whoa, that is so theatrical and so hidden,’ and so, I decided to juxtapose that story with the modern-day story of a woman trying to immigrate, because I’m so intrigued with how motherhood and citizenship and race are so entwined.”

Hall began writing “Orphan” before Arizona landed in the national spotlight for its controversial senate bill on illegal immigration. “And it was a very sad coincidence with Arizona that this was happening but from an artistic perspective, what an amazing opportunity to be able to respond to something that was happening!”

When she first conceived the project, Hall requested that Ulrich direct the play. Due to conflicts with Ulrich’s own production, her faculty adviser, professor Maya E. Roth, director of theater and performance studies, stepped in to direct the production instead. With Roth at the helm, countless hours of work and collaboration with her cast enabled Hall to turn her concept into a real production.

“[T]his piece is a lot about awareness. One of the things I loved about the piece is that … it was about migrant workers,” Goldman said. “But it was also about how a community of privilege like Georgetown does or doesn’t condition itself to pay attention to things that are outside of its orbit.”

“Watermelon Season” is a gripping story about the plight of migrant farmers in Florida. Ulrich found her inspiration for the play during a sociology class in which she learned about a coalition of farm workers who had organized themselves in an effort to fight against the injustices perpetrated upon them.

After learning more about migrant workers’ rights, Ulrich visited Immokalee, Fla., during an Alternative Spring Break trip. Once she saw the poverty stricken region firsthand, she said there was nothing left she could do but write the play. The trip proved to play an integral part in the production’s development; Ulrich realized that had she not personally interacted with the migrant community, the play could not have turned out as realistic as it did.

According to Goldman, the production was aimed at educating Georgetown students. The production blended artistic talent and Ulrich’s own spirit of activism in order to epitomize the stated goals of the theater and performing arts department, her adviser emphasized.

“Courtney is remarkable, and she is a really gifted artist who is interested in how that artistic work engages issues that matter and are urgent in the world,” Goldman said. “She tries to find how theater can really impact peoples’ lives and be a space to stir discussion and awareness and action and change.”

Despite the inspiration, the work was not easy, Ulrich explained. “The play I started with, I only used about a quarter of it in the end,” Instead she found much of her final content came from starting a dialogue with the greater community. In a unique approach to the creative process, Ulrich engaged in a “devised process,” in which she worked in concert with her actors to come up with much of the play’s content. For her production, many of the actors cast were not familiar with farm workers’ rights, nor did they have preconceived notions of the politics behind the matter.