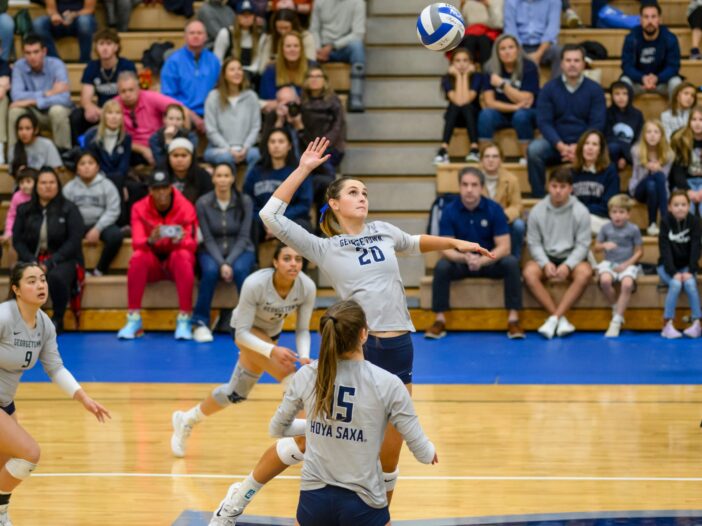 The Nov. 13 loss marked a continuation of a disappointing season for the Hoyas, who are on an 11-match losing streak and will likely finish the season ranked last out of the 11 teams in the Big East.

Hungry for revenge after falling to the Bulldogs 3-1 on Oct. 7, the Hoyas entered the first set on a high note with a kill from offensive leader and sophomore outside hitter Mary Grace Goyena. Goyena, who was named to the Big East All-Academic Team in her first season as a Hoya last season, has continued to show growth on the court this season.

However, the momentum did not last and Georgetown quickly fell behind, 1-5, and struggled to recover from there on. The Hoyas positioned themselves as close as 4 points away from the Bulldogs at 11-7 with help from two kills by Brennan Wilhite but ultimately could not close the gap and dropped the set 25-16.

The second set of the game proved to be the most competitive of the afternoon, as Georgetown battled to tightly trail Butler. The Hoyas did not let the Bulldogs get more than 5 points ahead for the first half of the set. Although Butler started to stretch its lead, the Hoyas charged back with 3 consecutive kills to remain in a dangerous position and turn the tide at 21-17.

Georgetown continued its late offensive run in the second set with 3 more consecutive points to threaten the Bulldogs at 22-20 and seemed to be gaining momentum. However, Butler did well to stifle any hopes of a Hoya comeback. With strong defensive play, the Bulldogs held Georgetown to only 1 more point, and completed the contested set 25-21.

The final set of the game started poorly for the Hoyas, as a worn out Georgetown team let up the first 6 points to fall behind 0-6. Despite 3 kills from Peyton Wilhite and a service ace from Watkins, the Bulldogs continued to maintain their distance throughout the set, ultimately taking it 25-16 to win the game in three sets.

Despite the loss, the Georgetown seniors put on an impressive performance in front of the crowd of almost 300 people. Brennan and Peyton Wilhite combined to make 14 kills for the team over the course of the game, and the latter finished with 3 blocks on the defensive end. In addition, Plutnicki showed all-around toughness in the game with a double-double of 28 assists and 12 digs.

Although the games should be competitive matchups, St. John’s is coming off two consecutive straight-set losses in the last week, and Seton Hall will enter having won only one of its four matches this month. Earlier this season, the Hoyas edged out Seton Hall 3-2 on Sept. 30 before narrowly losing to St. John’s 3-2 on Oct. 1.