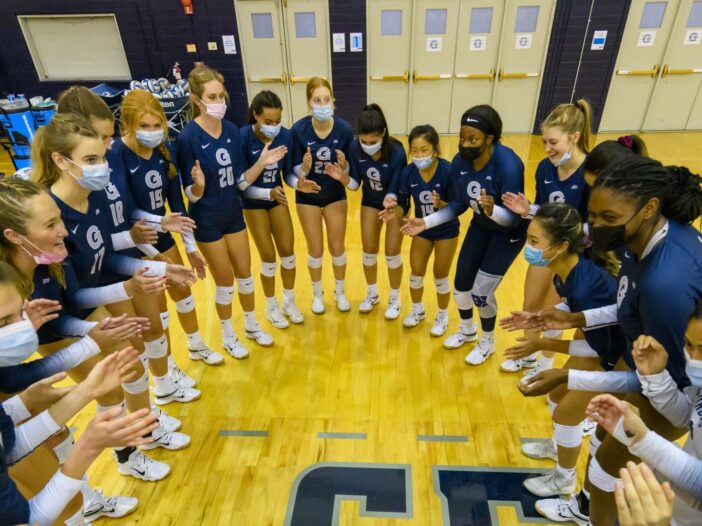 Georgetown women’s volleyball lost a tight match to the Butler University Bulldogs at home in McDonough Arena on Friday, Oct. 1. The Hoyas fell 3-1 to the Bulldogs in four sets (19-25, 25-23, 25-23, 30-28), with the teams battling back and forth until the very end of each set.

Georgetown (4-11-0, 0-4-0 Big East), coming off of 3-0 losses in the first two conference games against DePaul University and Marquette University, had a strong start against Butler (8-9-0, 2-2-0 Big East), going up 8-4. The Bulldogs fought back to tie the set at 11-11, but the Hoyas held strong and continued to dominate. With help from six kills by first-year outside hitter Giselle Williams, Georgetown finished out the set over Butler 25-19.

The rest of the match saw much more even play between the teams, with the final score of the second set leaving the Hoyas and Bulldogs within two points of each other. Junior right side hitter Peyton Wilhite helped Georgetown hang in at the close of the back and forth set, softly tapping the ball over the net for a kill to make the score 23-24. Butler matched Georgetown’s energy, however, claiming the second set 25-23 after the ball fell between Georgetown’s attempted block, tying the match with one set each.

Georgetown continued to battle in the third set, another hard-fought contest that played out until the final points. The Hoyas started the set strong with two aces in a row from senior libero Jessica Cusi and took a 4-2 lead, but could not slow the Bulldogs down. After earning two back-to-back points to tie at 23 points with the help of another two kills from Williams, the set went to the Bulldogs, who finished with two kills of their own.

Going into the fourth set, Georgetown showed great resilience. The set, the most competitive play of the match, had 13 tie scores and five lead changes as the Hoyas fought to push the match to a fifth set. First-year outside hitter Mary Grace Goyena rose to the occasion to supply the team with several clutch kills, helping keep Georgetown in line with Butler throughout the set.

Goyena’s kill to tie the score at 24-24 was the start of an intense finale to the match. The teams went back and forth to stop each other from gaining the final point necessary to win. Georgetown’s defense fought hard but could not compete, as Butler’s offense ultimately beat out the Hoyas after fighting off five match points, taking the set 30-28 and winning the match 3-1.

“It was great to see some of the defense step up –– Jess Cusi finishing with 26 digs in four sets was pretty huge, and I think she really anchors us in a lot of areas,” Heller said in a postgame interview with The Hoya. “In the last set, we ran out of substitutions so some people had to play in areas where they don’t normally play, and that was something that speaks to the depth, heart and talent that this team has that they didn’t fold and stepped into the roles we needed them to.”

Despite the loss, Georgetown came away from the game with impressive statistics. Williams had a total of 18 kills throughout the game, while Goyena had 14 of her own; first-year setter Lilly Costigan aided the offense with 52 assists. Cusi anchored the team on defense with 26 digs, while Goyena and junior middle blocker Makayla Serrett contributed five blocks apiece.

Heller has a positive outlook for the rest of the season.

“I think there were some bright spots on the court where things we have been practicing for the last two weeks have paid off and it has been really fun to watch this team learn and grow together,” Heller said. “We’re an underdog, but as tonight showed, we are not just a team that rolls over.”

The Hoyas will return to McDonough Arena once again to take on the University of Connecticut Huskies (11-5-0, 3-1-0 Big East) on Saturday, Oct. 9. The game is set to begin at 5 p.m.