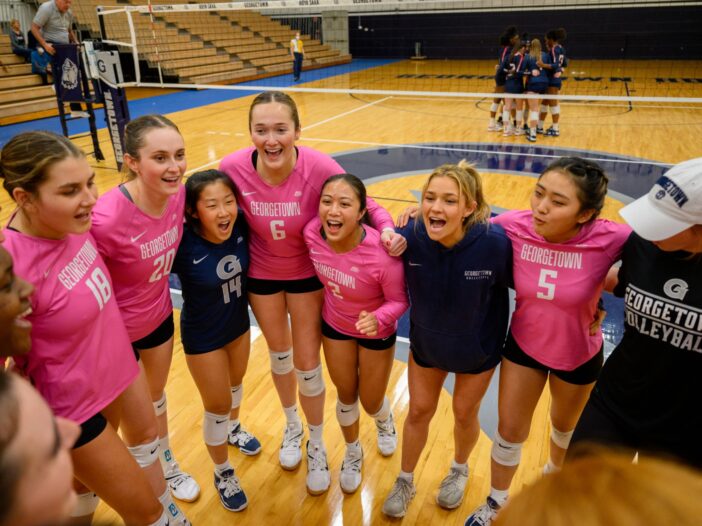 Despite posting their highest point total of the season against the University of Connecticut Huskies on Oct. 28, the Georgetown volleyball team could not contain the Huskies’ powerful squad of outside hitters as the Hoyas lost 3-0 with a set score of 25-23, 25-19, 25-16.

The Hoyas got off to a strong start and nearly took the first game, but eventually choked a late lead and subsequently fell in the next two contests. Georgetown (4-19, 2-10 Big East) came into the game looking for revenge for their 3-0 loss against UConn (13-10, 7-5 Big East) earlier this season.

“What we need to improve on the most since our last matchup with UConn is definitely point-scoring,” said in an interview with The Hoya. “We really did not play our best volleyball scoring-wise a couple of weeks ago.”

True to Heller’s word, the Hoyas came out strong in the first set, led by sophomore outside hitter Mary Grace Goyena and graduate middle blocker Brennan Wilhite, who had 6 and 4 kills, respectively. Senior setter Emma Plutnicki created plenty of scoring opportunities, with 14 assists in the first set, while adding a kill of her own. Georgetown led 23-22 late in the set, but could not close it out, as UConn won three straight points to take the set 25-23.

The second set finished much like the first, with UConn pulling away after a tied score of 16-16 to take the set 25-19. Junior middle blocker Chanelle Smith led the Hoyas at the net with a key block to keep the score tight, adding to her match-leading total of five blocks. Sophomore libero Karis Park also turned in a productive performance, making some spectacular diving saves and leading both teams with 17 digs in the match.

UConn eventually began to overpower the Hoyas in the third set, led by outside hitters Allie Garland and Jasmine Davis, who each had 13 kills on the day. Libero Aset Baker-Falealili went on a strong serving run in the third, carrying the Huskies to a 18-11 lead, from which the Hoyas could not recover.

After the match, Heller said he was proud of his team’s effort regardless of the final scoreline.

Heller also said the team needs to improve their serving.

“We definitely need to serve better,” he said. “Part of our game plan is to serve really tough to set up on defense, which we did really well tonight. We had 57 digs in three sets.”

Though Heller said serving was an issue, he was pleased by the performance of the middles.

“I think Brennan Wilhite did a really great job tonight, having 8 kills in three sets is really nice, and I want to also shout out Chanelle Smith, you know, 5 blocks in three sets is also a lot,” he said. “Our middles have done a really nice job carrying us and being consistent this season. It’s been really good to see that.”

Georgetown built on this performance against the Providence Friars (11-13, 3-9 Big East) on Oct. 29. Though the Hoyas ultimately lost the contest, they took the Friars to five sets. They play a conference powerhouse in Marquette (20-2, 11-1 Big East) on Nov. 4.

Georgetown will look to build on their improved conference play with an Oct. 29 matchup against the Providence Friars (11-13, 3-9 Big East), to whom the Hoyas narrowly lost, 2-3, on Oct. 14. Providence is looking to rebound from a 1-3 loss at Villanova on Oct. 28.