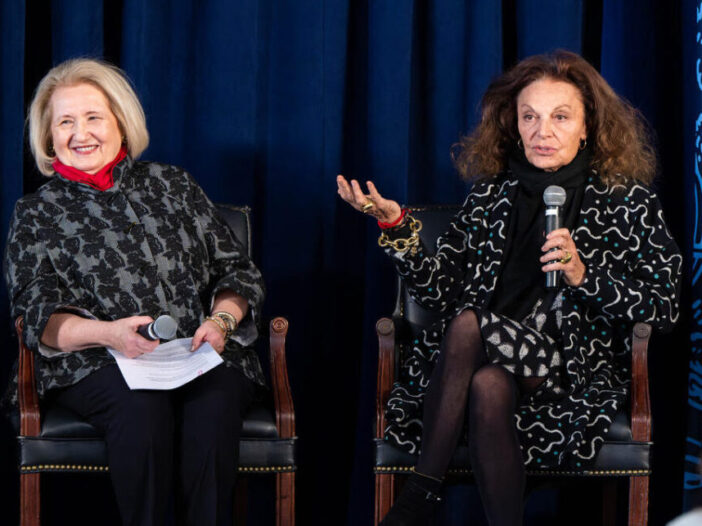 To be in charge means to be committed and true to oneself, fashion designer and inventor of the wrap dress Diane von Fürstenberg told Georgetown University students.

The event, titled “Women Rising: A Conversation with Diane von Fürstenberg” and held Nov. 9 in Copley Formal Lounge, featured von Fürstenberg, an acclaimed fashion designer and founder of the fashion company DVF, in conversation with Ambassador Melanne Verveer, the current executive director of Georgetown Institute for Women, Peace and Security (GIWPS) and former U.S. Ambassador-at-Large for Global Women’s Issues. The event was co-hosted by GIWPS and the Walsh School of Foreign Service (SFS).

Credited as the creator of the popular wrap dress, von Fürstenberg reflected on her start in the fashion industry as being born from a simple dress and a desire to empower herself and, subsequently, other women.

Having launched InCharge, a platform that seeks to connect, empower, inspire and advocate for women around the world, von Fürstenberg said she designs for women in charge.

Von Fürstenberg said her sense of purpose and commitment to freedom is deeply rooted in her identity as the daughter of a Holocaust survivor.

“When I think about my birth, I realize that because my birth was a miracle, I had already won the minute I was born,” von Fürstenberg said. “I was a shoot of green in a field of ashes and so my purpose, I think, has been, and will be, until I die, to honor life and to be grateful for life.”

“She has dedicated herself to efforts that celebrate and support women leaders, establishing in 2010 the DVF Awards to honor and provide grants to women leading impactful social change and serving on the board of the Vital Voices, an organization co-founded by Ambassador Verveer, focusing on supporting global women leaders, innovators and entrepreneurs,” DeGioia said at the event.

At the event, students spoke on women-led revolutions, including Ghandehari, who spoke about the protests currently taking place across Iran.

The protests were sparked by the death of Mahsa Amini, a 22-year-old Kurdish woman, who was arrested by morality police in Tehran for allegedly violating Iran’s hijab law. Amini died three days after her arrest from what protesters believe to be the result of police beatings.

Ghandehari said that the protests taking place in Iran are part of a woman-led revolution.

“One thing that’s so different about this protest is that people didn’t start protesting because of economic reasons or mismanagement that have been the reasons for a lot of protest in previous years, but they started because a woman died and she should have been alive and she could have been alive right now in any other country,” Ghandehari said at the event.

Kovach said that since Russia’s invasion of Ukraine in February, Ukrainian women have been fighting in large numbers on the front lines, trying to maintain a sense of normalcy for their families after being displaced, and experiencing heightened amounts of gender-based violence as a result of the war.

“I believe that the least everyone can do is to continue to talk about Ukraine, continue to think about people who are staying there right now,” Kovach said at the event. “Another thing we can do is to support different local organizations, different initiatives, because they have a chance to talk to these women, to these populations specifically, and they can make sure that they have everything they need.”

Reflecting on the injustices women are facing in her home country of Afghanistan, Alokozai said that Afghan women and girls are making their voices heard as the Taliban continues to deny them their basic right to education.

“Women are protesting, they are taking the risk, they’re getting out there and still raising their voice because now they know only they, themselves, can help themselves get out of there,” Alokozai said at the event.