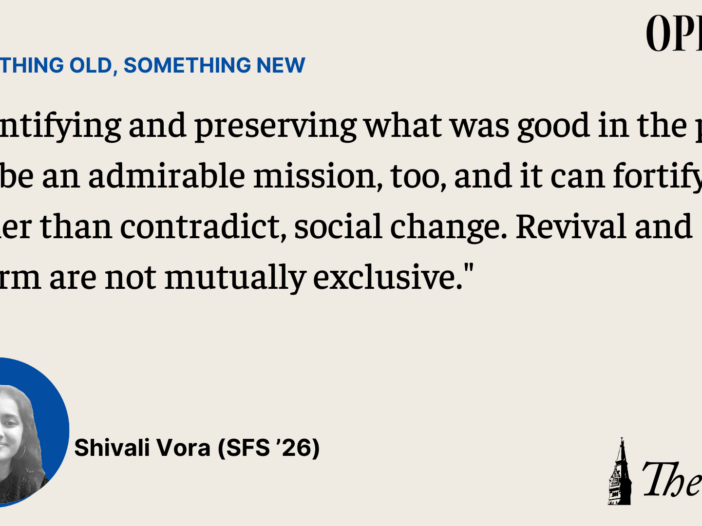 While watching a movie called “Goodbye” over winter break, I was happy to see many of my own personality traits reflected in the unorthodox protagonist, Tara Bhalla (Rashmika Mandanna), who clashes with societal norms upon returning to her orthodox hometown. Initially, I was cheering for Tara’s rebellions, feeling validated. But then I was surprised with a challenge.

In one scene, Tara refuses to touch a priest’s feet, eschewing a prevalent Indian tradition. Her father apologizes on her behalf, but rather than taking offense, the priest takes the time to explain why the tradition exists.

“We don’t touch feet to humble ourselves,” the priest tells Tara. “We do it to receive blessings.”

From Malala Yousafzai to Greta Thunberg to social activists right here on Georgetown University’s campus, Generation Z is developing a distinct reputation for defying long-standing structural inequities. And while this mission is admirable, it can sometimes cause us to adopt a generalized hostility toward the past.

I am beginning to realize that “tradition” and “backwards” are not synonymous. Identifying and preserving what was good in the past can be an admirable mission too, and it can fortify, rather than contradict, social change. Revival and reform are not mutually exclusive.

After 13 years of attending Catholic schools, I had qualms about continuing my education at another, worried that Georgetown would be a closed box of propriety and conformity. Instead, I found that this is one of the most welcoming and freeing places I have ever been. Yet, despite its heterogeneity and the encouragement of open discourse, Georgetown is administratively more conservative than many peer institutions because of its religious affiliation.

This dichotomy between progressive, independently minded students and the comparatively traditional higher-ups makes our campus more turbulent than predominantly liberal or conservative institutions. For example, university stances on current issues such as reproductive health sometimes stand at odds with the prevailing opinions of the student body.

Though there are indeed conservative voices in our generation, we typically seek to transform rather than treasure and to change rather than cherish. And that, by and large, is a good thing. From abhorrently oppressive systems, like redlining, to more subtly problematic customs, such as cultural taboos surrounding menstruation, history has no shortage of examples proving that just because something has endured does not mean it is correct.

As my mom tells me, however, certain time-honored traditions deserve at least the benefit of our doubt.

In essence, traditions exist for the same reason that art, music and poetry do: they are part of the human desire to not be forgotten. In perpetuating tradition, we need not think that we subjugate ourselves to antiquated beliefs. Instead, we become — for just the brief second that I bend to touch my grandparents’ feet, or the brief minute Georgetown students run up the Exorcist steps — something larger than ourselves. We place ourselves into community — into the 300,000-year-strong human story.

At the same time, blind reverence for tradition without necessary modification is a recipe for stagnation and injustice. I will bow down to my grandparents, but not to the patriarchy and rigid hierarchies of their time that prescribed, for example, wives to touch their husbands’ feet, or students to unquestioningly accept their teachers’ directives.

Questioning tradition is not disrespectful if it is done with the aim of understanding rather than automatically uprooting. A practice I’ve found helpful is researching the history behind any tradition I dislike. Many times, there is a background compelling enough to earn my respect, but not my adherence. Other times, I find the logic so utterly flawed that I endeavor to expose the flaw and shift others’ perspectives. And still other times, I discover something that shifts my own perspective.

Malleability is key to this process of critical, but compassionate, inquiry. If our generation becomes set in our ways, we risk becoming indistinguishable from those past generations from which we are trying to set ourselves apart.

As Tara became more open-minded over the course of the movie, so did I. The next morning, before I left for Georgetown, my mom held out the usual slice of jaggery — a molasses-like sweetener that we eat before starting anything new — ready to shove it into my protesting mouth. This time, she didn’t need to: I swallowed it with a smile.

Shivali Vora is a first-year student in the School of Foreign Service. Something Old, Something New is published every third Friday.