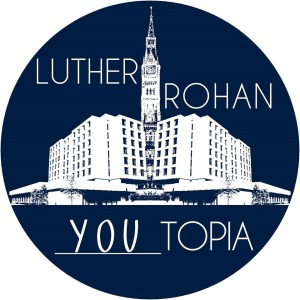 As this year’s Georgetown University Student Association executive campaign descended on the Hilltop, the candidacy of Joe Luther (COL ’16) and Connor Rohan (COL ’16) struck many students as a stunt, given that the pair are leaders of the Georgetown Heckler, a satire publication.

Additionally, in the 2014 GUSA poll conducted by The Hoya, exactly one-third of respondents said they would not vote at all; 67 percent said they were not following the race very closely, or at all; 9.5 percent said GUSA was “very relevant” to campus life.

With this apathy in mind, we urge you to vote Luther-Rohan on Feb. 19. Do not take their seemingly facetious platform lightly; behind the humor lies a thoughtful agenda committed to mental health reform, transparency and student-community engagement.

The pair’s strength lies not in an expansive platform or experience with GUSA (indeed, they lack both) but in their demonstrated ability to reinvigorate Georgetown institutions and engage students in an unorthodox yet effective manner.

A Different Approach to GUSA

Despite its outwardly satirical persona, the Luther-Rohan campaign recognizes the gravity of its candidacy for the GUSA executive.

Luther and Rohan advocate a strategy distinct from those of the other campaigns in the running, a strategy born not of experience with the inner workings of GUSA or the administration, but of humor as a force for student mobilization.

GUSA has repeatedly struggled to incite a large enough student response to most issues and has only succeeded in certain circumstances, such as the opposition to the proposed satellite campus nearly two years ago.

As a result of Luther and Rohan’s concerted effort over the past year toward rebuilding the Georgetown Heckler, the publication has become a satirical powerhouse with over 2,500 likes on its Facebook page. The Heckler’s articles and videos, despite their element of humor, often tackle the same issues that GUSA does — diversity, student life and progress on the Campus Plan, among others — yet they receive a comparable and often greater amount of exposure through social media. The ticket holds that they can utilize this same approach to incite a level of student interest in GUSA that has not been seen for years.

The same approach is seen for their slogan: ___topia. More than an amusing quip, it is a commentary on the oft-empty promises made by many past and present GUSA candidates. Even their logo, an amalgam of Healy Tower and Darnall Hall, holds a deeper meaning, presenting the idyllic image of Georgetown’s iconic building — so often touted by potential GUSA executives — joined with something perhaps more indicative of student life: one of the freshman residences that is usually forgotten on Georgetown Admissions Ambassador Program’s weekend promotional flyers and candidates’ websites alike.

A mention of GUSA often invokes the thoughts of a hyperactive campaign season and a comparably meager and inconsequential effort put forth by elected students. For those outside the organization, there is little opportunity to become involved. Students receive a minimum of weekly emails and flyers for various initiatives but are rarely invited to participate without a specific, usually urgent, cause. This unfortunate circumstance prompted Luther and Rohan to describe GUSA as nothing other than an “opaque monolith.”

Part of a commitment to greater transparency includes exposing the reality that many elected to GUSA do not accomplish all of what they promise to students. Programs like meal swipes at Hoya Court and the delay of the study-abroad housing policy changes often take months of administrative meetings and planning. Tickets often propose hundreds of initiatives and policy changes and have neither the time nor the manpower to enact them all.

Contrary to the idealistic notions of many candidates, this ticket is refreshingly sincere in what they believe they can accomplish, evidenced by their slim but concentrated platform focusing on a handful of key issues.

A GUSA executive with the ability to engage the student body and generate input can bridge the gap between students and the entity tasked with expressing their desires to the administration.

Although most of their platform is replete with unfeasible satire, Luther and Rohan have treated mental health and wellness on campus with the utmost seriousness. With clear directives, including required Title IX training for all university administrators and faculty and communication with Counseling and Psychiatric Services and the Office of Billing and Payment Service to explore subsidizing CAPS appointments using tuition, the candidates demonstrate a thoughtful commitment to workable solutions for a system that is deeply flawed.

Regarding sexual assault, the candidates are equally forthright, pushing for thorough reporting and a revamped Code of Student Conduct accounting for different types of sexual misconduct. While theirs was not the only ticket to address mental health and sexual assault on campus, the firm and knowledgeable stance they took on the matter, despite satirizing several other topics, validates the urgency of such issues and their thoughtful approach to them.

With the potential to define the future of student housing and neighborhood relations for the next two decades, the stakes for the upcoming 2018 Campus Plan negotiations, which include proposed constructions and changes to housing policy, are very high. Luther and Rohan recognize the importance of this matter and are approaching it with a fresh perspective.

They will focus on magnifying student interest in the issues this plan puts at stake while simultaneously facilitating a more comprehensive dialogue between students and neighborhood residents.

The ticket seeks to increase student participation on community boards with the hope that neighbors will begin to see students as something other than a faceless mob of troublemakers. This generalization has created a contentious relationship that has resulted in countless noise and conduct violations.

Our endorsement of the Luther-Rohan ticket is not without concerns, however. While their confidence in their ability to mobilize students seems well founded, the candidates’ strategy appears to be based more on theory than concrete initiatives at this point, and therefore is something they will need to develop further.
If elected, the pair must immediately put forth a realistic set of goals for their term and assemble a diverse and experienced cabinet with whom they can work to demonstrate their commitment to the job to both the student body and the administrators and endow their term in office with legitimacy.

Nevertheless, the ticket offers an insightful and refreshing perspective on student government, to the extent that naming any other ticket as a comparable alternative would undermine the legitimacy that Luther and Rohan have struggled to defend to skeptical students throughout their entire campaign.

Luther and Rohan have used their characteristic satire to gain attention and shed light on issues critical to the future of this campus. If elected, we believe they can harness this humor to create a dynamic GUSA executive.