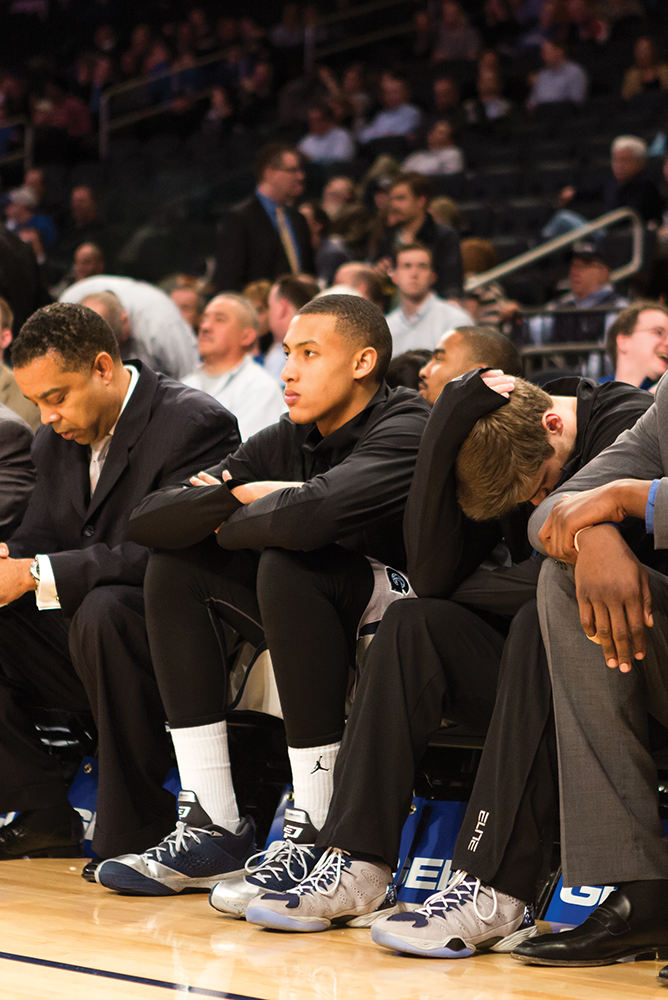 After four years of watching every Georgetown men’s basketball game, I have seen the best of the best (usually in mid-February) and the worst of the worst (usually about two weeks later).

When I first stepped onto campus four years ago, I heard about Georgetown’s recent tournament disappointments — notably to a No. 14-seed Ohio and a Stephen Curry-led Davidson squad.

But I figured those kind of losses were a thing of the past and they would never happen to me. Georgetown would muster its 2007 Final Four grit. The grit they had when Jeff Green crushed Vanderbilt’s hopes at the buzzer and Jonathan Wallace nailed a three that allowed the Hoyas to sneak by North Carolina and into the semifinals.

Year after year, I always figured that this time things would be different. But the Hoyas never dug deep enough for a tournament run. Whittington and Adams never made an impact on the court — although for very different reasons — and this time, like last time, things were very much the same.

As the seconds ticked toward the final buzzer, it was seemingly ticking away my days until graduation. I received a text from my dad: You may have watched your last game as a student, but you’ll always follow Georgetown and be a Hoya forever.

Dramatic, to be sure. But still sorting through emotions of numbness and disbelief — disbelief that I witnessed just a single NCAA tournament win in my four years at Georgetown — I decided to put the text out of my mind.

Let’s rewind. My obsession with Georgetown basketball began early in my freshman year when Georgetown beat Missouri. The Hoyas were down late with only a few seconds to play, but after a key turnover, Chris Wright hit a buzzer-beater that sent the game into overtime. Jason Clark took over from there, and the Hoyas won.

Over the course of my freshman year, I witnessed some incredible games that ultimately culminated with a loss at the hands of No. 11-seeded VCU in the first round of the NCAA tournament. It was a loss to another double-digit seed that I did not expect.

But VCU’s eventual Final Four appearance and emergence as a household name put my mind at ease: Somehow, I could accept losing to a better team. What I drove far from my mind was the idea that there was something fundamentally wrong with Georgetown basketball; labeling the Hoyas a “choke team” was a lazy and illogical analysis.

And so, I entered my sophomore year fresh with naive optimism, making my way through the ranks of The Hoya in hopes of one day covering the men’s basketball team. This team followed a similar trajectory as the previous year: The Hoyas followed a surprisingly good nonconference performance with a strong Big East showing.

Heading into NCAA tournament as a No. 3 seed, I felt good about our chances but terrified that Belmont would ruin Georgetown’s season as VCU did the year before. The Bruins did not, but in the next round North Carolina State made sure to. With a few minutes of lost focus, Georgetown was once again eliminated by a double-digit seed.

But, I reasoned, this Wolfpack team was loaded with young talent and was selected to win the ACC the following year. This game was not an upset but rather a matchup between two young, talented teams.

And with this justification, I allowed myself another year of unadulterated fandom. While the Hoyas began their season on a naval base against Florida, I began mine studying abroad, where I stayed up until 4 a.m. in a dark Dublin apartment just to watch the referees call off the game at halftime. Instead of feeling frustrated at the unsatisfying ending, I went to bed excited for another year.

In many ways, the 2012-2013 season was the most extreme one for Georgetown basketball in recent memory. As the Big East was crumbling, Otto Porter led the Hoyas to a Big East regular season title and two historic wins against Syracuse while earning All-American accolades. While Georgetown was unable to secure a Big East tournament championship to match its regular season title, the Hoyas showed no signs of slowing down heading into the NCAA tournament.

And then Florida Gulf Coast happened, a game I witnessed firsthand. I will never forget the feeling of disappointment and shame I tried to suppress on the bus ride home, desperately grasping for excuses that would allow me another year of hopeful Georgetown fandom.

But I couldn’t find any so the next season I immersed myself in the strictly analytical mindset of a reporter: At last, I landed the coveted basketball beat writer position. I sat in the pressroom alongside writers from the Washington Post and other media outlets, asking the mundane questions after each game: “What did you see from Mikael Hopkins today?” “Talk about Markel Starks’ emergence as a leader of this team” and “Is Josh Smith going to play at all this year?”

Accompanying each passing loss — of which there were many, helped in part by Whittington and Smith’s absence — came an increased feeling of numbness. Gone was that optimism that carried me through my previous three years.

Of course, that’s the point. Reporters aren’t supposed to feel bias, and (as I sat behind my laptop, frantically composing tweets and taking notes on the game), I began to feel less and less with each passing game — especially when it became clear that Georgetown was NIT-bound.

When the seedings were announced for the NIT, it was small comfort that Georgetown was set to play in McDonough Arena against West Virginia. While the other students found their way to the cramped bleachers, I climbed up two sets of stairs (and weirdly enough, a ladder) to get to the skybox — my home for the following 40 minutes of basketball.

As a peered down on the game, I found myself observing the fans — particularly my friends in the student section — as much as the game itself. I began to rifle through all of the cliches of being a senior and settled on one in particular – This could be my last game.

As if by instinct, I packed up my laptop, procured a wristband and settled back where I belonged in the student section. I was no longer restrained by my supposed neutrality as a reporter, and for the first time in a year, I felt like a fan and it felt good.

Which is why Georgetown’s loss to Florida State stung. Yes, it was expected based on seedings and Las Vegas odds. But it was also, undeniably, my last time watching the Hoyas as a student.

Over the past couple of weeks, I struggled between my time as a Georgetown fan and reporter. I wrestled with the idea about being excited over another team, another recruiting class, another unknown season. My hyper-analytical side was trying to prevent me from feeling the truest parts of being a sports fan: Without excitement, there could be no fulfillment. It would be impossible to recapture the sense of community I felt against West Virginia without making myself at least a little vulnerable.

I’ve let myself become excited again — excited about one of the best recruiting classes John Thompson III has ever brought in; excited about the return of Josh Smith, the most dominating big man Georgetown has had since Greg Monroe; excited about the possibility of winning the second year of the new-look Big East.

And with that small internal victory, I revisited my dad’s text and admitted that, despite closing in on graduation, he still had worthy advice for me. I will follow the Hoyas forever.

I sincerely enjoyed my time as a reporter, but it’s important to indulge in the fan in all of us — even if our justifications for supporting a team seem totally irrational — just to get us through another year. It’s a lesson every sports fan must learn, and it’s no different for Georgetown basketball

Georgetown will be fine. The program continues to invest resources in the future and remains the class of the Big East. The name alone will bring in high level recruits and keep the Hoyas competitive year in and year out. And one day — probably sooner than we all think right now — Georgetown will return to the Final Four.

No, my time at Georgetown wasn’t supposed to end this way. Not for me.

But then again, maybe it hasn’t.