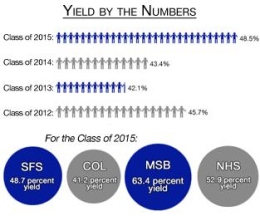 Georgetown will not be offering any spots to students still on the school’s waitlist after nearly half of all accepted students for the class of 2015 opted to attend the Hilltop this fall.

The 48.5 percent yield rate represents a significant increase from those of previous years. The classes of 2014, 2013 and 2012 had yield rates of 43.4, 42.1 and 45.7 percent respectively, according to Charles Deacon, dean of undergraduate admissions.

Deacon said that the Office of Undergraduate Admissions took into account both the students that would defer their studies at Georgetown for a year as well as the applicants that may choose to attend other universities after being taken off of their waitlists.

“We have essentially overbooked, but we expect some will defect,” he said, adding that his office expects the Class of 2015 will hit its target number of 1,580 students.

Georgetown also met many of its admissions goals in terms of diversity. The incoming freshman class includes at least one student from all 50 states in the U.S. New York has demonstrated the highest yield after slightly edging out California, the state with the highest number of applicants.

Those who are not U.S. residents will arrive from 49 nations around the world this fall. Deacon said that of the almost 2,400 international students who applied to Georgetown, about 15 percent were admitted. About half of that group has committed to enrollment.

Additionally, 151 African-American students and a record-high 169 Latino students have committed to Georgetown, giving the university a 40.5 and 45.6 percent yield rate respectively among these groups.

Deacon said that the rise in the appeal of the business school, which jumped to the 10th spot in Bloomberg Businessweek’s 2011 ranking of undergraduate programs, could be attributed to a set of factors.

“The new facility helps,” he said, “I also think the financial improvement [in the economy] recently convinced kids to apply to McDonough.”

Georgetown’s overall yield is more than 10 points higher than that of neighboring school The George Washington University, which experienced a drop in its rate for this application cycle. According to The Hatchet, the GWU student newspaper, 33 percent of 7,022 students admitted to the school’s Class of 2015 have signaled their intention to enroll through an initial deposit.

Harvard University, by comparison, saw a yield rate of 77 percent this year. Other peer institutions have not announced their yield rates for the Class of 2015 at this time.

Georgetown’s Office of Undergraduate Admissions is happy with the progress and the popularity seen in the university’s high yield rate and an unprecedented total of 19,275 applications received.

Deacon also said that steps taken by the admissions team and the Georgetown Admissions Ambassador Program could have contributed to this spike in appeal.

GAAP, a student-run organization that aims to inform prospective students about the university, holds several open house weekends for those accepted to Georgetown so that they may explore life on the Hilltop.

“We had a good turnout at GAAP open houses and we had really great responses from those people [who attended],” Deacon said.

Deacon also mentioned the positive effects of new efforts the organization has taken to reach out to Georgetown hopefuls through social media.

GAAP has established an official Facebook group for the purpose of connecting members of the new freshman class.

The webpage, which has over 1,000 members, is described as “a forum for you [members of the Class of 2015] to get to know one another and have your questions answered by current Hoyas.”

“That social media impact is hard to measure,” Deacon said. “But for people on the fence, that could have been the thing that pushed them over.”

On the whole, Deacon said he was pleased with the Class of 2015’s yield rate.

“We have had a dramatically good year,” he said.