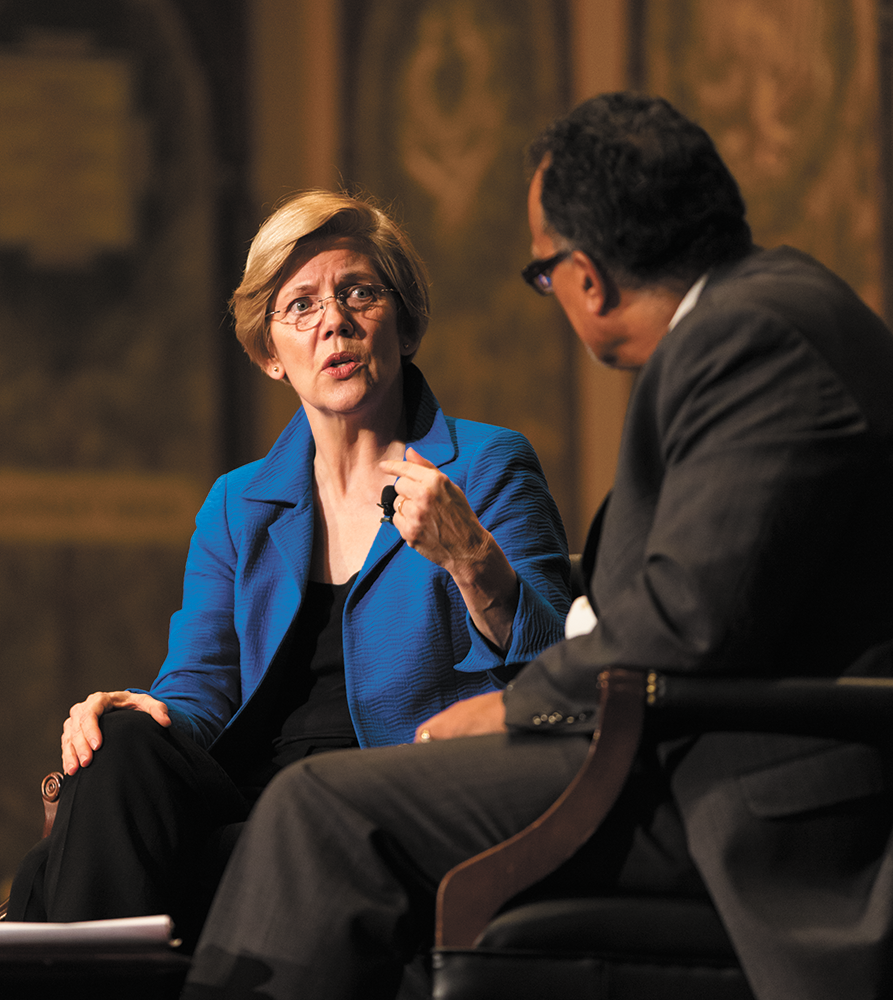 Sen. Elizabeth Warren (D-Mass.) focused on the moral and strategic importance of minimizing civilian casualties during combat while also touching on some domestic issues in her delivery of the 2014 Whittington Lecture, entitled “Collateral Damage, National Interests and the Lessons of a Decade in Conflict,” in Gaston Hall on Wednesday evening.

“Seriously addressing the issue of civilian casualties is essential to upholding our values at home and advancing our interests overseas,” Warren said, in her first foreign policy speech since assuming her senate seat.

The Whittington Lecture is given each year in memory of Leslie A. Whittington, a professor and associate dean of the former Georgetown Public Policy Institute, who died alongside her husband and two daughters when American Airlines Flight 77 was hijacked and crashed into the Pentagon on Sept.11, 2001.

After reflecting on Whittington’s death and the tragedy that swept the nation in the aftermath of the Sept. 11 attacks, Warren pointed out that with the conclusion of the war in Iraq and the drawdown in Afghanistan, the United States is concluding its first chapter of post-9/11 history.

“We are ending two wars, but this does not mean that we will withdraw from the world beyond our shores or pretend that there are no threats to our safety and security. … As these wars come to an end, we also have an opportunity to think about what we can learn from the last decade of conflict,” Warren said.

Specifically, Warren cited a theory known as “insurgent mathematics” from former General Stanley McChrystal, once the top commander in Afghanistan. According to this principle, each time an insurgent is killed, as many as ten new enemies are created out of their desire for revenge or martyrdom.

“McChrystal describes this dynamic with insurgents, but the same dynamic is at work with collateral deaths of innocent civilians and the same dynamic can apply to all kinds of military operations,” Warren said.

Warren suggested that the lessons learned during the wars in Iraq and Afghanistan should be institutionalized in order to decrease civilian casualties in the future. She called for support of efforts to develop military training programs to minimize civilian casualties and for an improved system of tracking these unintended casualties. Further, Warren suggested that the military establish practices for expressing regret and compensating families in the event that civilians are killed.

“Now is the time to think systematically about these kinds of efforts and to incorporate them into our military training and planning,” Warren said.

Prior to her election to the United States Senate in 2012, Warren was a professor at Harvard Law School specializing in bankruptcy law. A question and answer session followed Warren’s address.

While questions were submitted on notecards prior to the lecture and posed to Warren by McCourt School of Public Policy Dean Edward Montgomery, who also introduced Warren, one individual stood up at the session’s conclusion and called for preventative measures to avoid war with Russia.

“What are we going to do right now with the situation developing in Russia? This is looking like a world war,” a man said.

The activist likened the lack of preventative measures to avoid a Russian invasion of Ukraine to the British and French appeasement of Nazi Germany at the 1938 Munich Conference.

While security personnel approached the individual, Warren responded to his assertions.

“The question about whether or not Ukraine will hold together or whether Ukraine will be caught in a conflict that is both internal and that becomes part of a larger external conflict is what we’re struggling with, and our allies are struggling with,” Warren said. “I think the idea that we jump, as you suggest in your question, to knowing what the answer is — I just think you’re wrong at this point.”

Prior to this interruption, Warren answered a few questions focused on domestic issues.

One question focused on the small number of women in Congress.

“The best way [women] could have our voices heard is if there were more of us. … We have to have women who are going to go out there and try, who are willing to run for office,” Warren said.

When asked what can be done to make a college education more affordable, Warren suggested incentivizing the high performance of schools by giving less federal loan money to colleges that fail to meet certain criteria such as low dropout rates and high percentages of students graduating on time. Further, Warren said that students should be able to refinance their student loans and that the government should not be making a profit off college students.

“When she talked about student loans, it was huge because it’s an issue that we’re all dealing with. She challenged the schools themselves and she challenged the government, which I though was great. It was self-effacing,” attendee Eamon Johnston (SFS ’15) said.

Warren’s desire to ease the financial burden on college students resonated well with Georgetown students in attendance, as did her ideas to lessen civilian casualties in U.S. military campaigns.

“In regards to collateral damage and civilian casualties, I’m all for more transparency and better enforcement of policies that prevent civilian deaths. I wish that she had been more specific about how domestic discussion would impact our military’s behavior in these areas,” attendee Justin Fang (COL ’17) said. “Overall, however, I was very impressed and refreshed to hear her ideas, especially about student loans and domestic policy.”