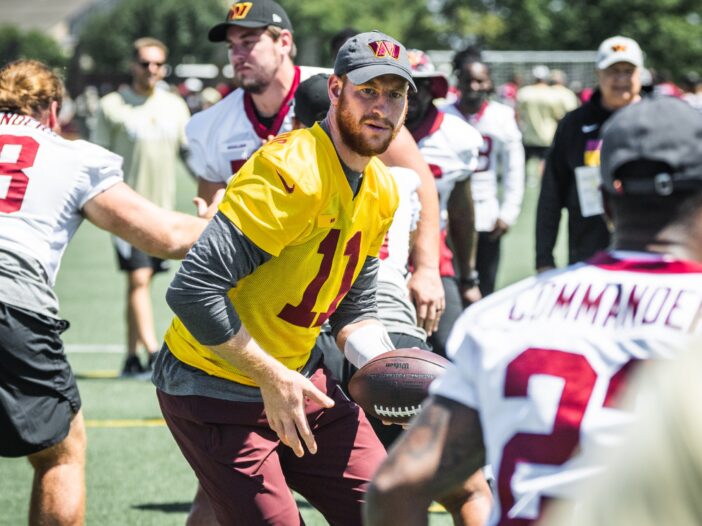 Equipped with a new name, a new logo and a new quarterback, the Washington Commanders march into the 2022-23 NFL season with little resemblance to the former Washington Football Team (WFT).

That might be for the best, however. In fact, most supporters likely wish the team went further with throwing out the old and bringing in the new.

For years, the Washington, D.C. team has been mired in controversy, from allegations of sexual harrassment to a toxic workplace culture to the infamous team name controversy. In 2020, 15 female former team employees revealed to The Washington Post that between 2006 and 2019, they were sexually harassed by multiple high-ranking team members. Not long after, more former employees came forward to share their stories — at least one of which involved team owner Dan Snyder.

As calls for reform grew louder, the House Committee on Oversight and Reform commissioned a roundtable discussion in February to discuss the organization’s culture of toxicity.

Rep. Raja Krishnamoorthi (D-IL), chairman of the house subcommittee on economic and consumer policy discussed the rationale behind investigating the Commanders.

“We launched this investigation because the NFL has not been transparent about the workplace misconduct issues it uncovered within the WFT,” Krishnamoorthi said at the Feb. 3 discussion. “No person deserves to be harassed or abused at work, and this Committee will do everything in its power to protect employees at the WFT and beyond.”

Alongside these issues, Washington has also been entangled in a deep controversy about its former name, a racist anti-Native American slur. Nevertheless, team owner Dan Snyder vehemently opposed any name change, repeatedly citing efforts to support Indigenous communities through his foundation WROAF, the full name of which The Hoya will not use because it contains a racist slur. But despite Snyder’s attempt to reshape the narrative, an investigation by Sports Illustrated revealed he created the WROAF in an attempt to quell public outcry. Another investigation by USA Today found that when public pressure over changing the team’s name began to quiet down, WROAF discontinued its philanthropic contributions.

Still, as the organization faces this mountain of controversy, the Washington Commanders are trying to focus on their performance on the field. The talk of the offseason for the Commanders has primarily been about their new name, new jerseys and new quarterback. Attempting to find their first long-term answer for quarterback since Kirk Cousins, the team sent two third-round picks and swapped second-round picks with the Indianapolis Colts to land Carson Wentz.

Wentz, 29, entered the NFL in 2016 when he was selected second overall by the Philadelphia Eagles in the NFL Draft. Since then, his career has had its fair share of ups and downs. In 2018, he led the Eagles most of the way to their first-ever Super Bowl win. Three years later, after he was traded to the Indianapolis Colts, he struggled immensely against the league-worst Jacksonville Jaguars in the final week of the season. Thanks to their inexplicable loss, the Colts were eliminated from the playoffs and Indianapolis fans were left furious.

Luckily for Wentz, the past seemed to be in the past as Washington took the field for its first preseason game Aug. 13. With nearly 45,000 fans in attendance at FedEx Field, Wentz put together a solid 10-for-13, 74-yard performance in his debut. Part of that success could be attributed to his receiving core, made up of Terry McLaurin, Curtis Samuel, Jahan Dotson and Logan Thomas, which is arguably much better than anything he had with the Colts.

A few of his dimes to those players electrified the stadium enough to make some media personnel break the rules against cheering in the press box, with high fives and fist pumps flying around. While it wasn’t enough to hold off the Carolina Panthers that afternoon, Commanders Head Coach Ron Rivera said he was pleased with Wentz’s performance after the game.

“I thought he went through his progressions the way he needed to. I thought he handled the huddle well,” Rivera told reporters. “He did the things we hoped he would do.”

Now, with the Commanders’ regular season starting this weekend, the offense’s new chemistry will be put to the test. Will McLaurin enjoy another breakout season with Wentz at the helm? Can the defense survive without pass rusher Chase Young for the first few games?

And, most importantly, will Wentz get his revenge on the team that sent him on a one-way flight out of Indianapolis? The Commanders open the season against the Jaguars on Sunday, Sept. 11 at FedEx Field.