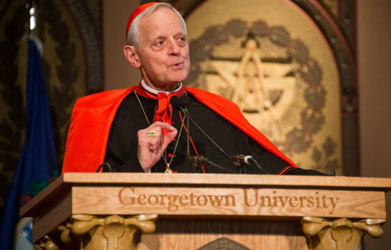 Pope Francis accepted the resignation of Cardinal Donald Wuerl, the Archbishop of Washington, D.C., on Oct. 12.

The resignation comes after an August Pennsylvania grand jury report detailed Wuerl’s inconsistent record of handling cases of sexual abuse as bishop of Pittsburgh. Pope Francis’s move was awaited by those who pressured the church to take a harsher stance against officials they see as complicit in the protection of abusers.

Though the pontiff accepted Wuerl’s resignation, he praised the former cardinal and took steps that maintain Wuerl’s influence within the Catholic Church.

“You have sufficient elements to ‘justify’ your actions and distinguish between what it means to cover up crimes or not to deal with problems, and to commit some mistakes,” Pope Francis wrote in a statement. “However, your nobility has led you not to choose this way of defense. Of this, I am proud and thank you.”

Pope Francis also requested that Wuerl, who served as archbishop of Washington since 2006, remain as an interim Apostolic Administrator of the Archdiocese while the church searches for a successor. Wuerl is set to remain in the Congregation for Bishops, granting him a lasting role in shaping the future of the American Catholic Church.

Erica Lizza (SFS ’19), president of Catholic Women at Georgetown, criticized the church’s response as failing to adequately acknowledge the ways in which Wuerl did not hold certain priests accountable.

“This response is discouraging for Catholics who had hoped the church would punish not only abusers, but those who permitted abuse to occur or covered it up,” Lizza wrote in an email to The Hoya. (Full Disclosure: Lizza is a member of The Hoya’s Editorial Board)

The resignation comes amid a movement for the university to rescind the honorary degrees it gave to Wuerl in 2014 and to Theodore McCarrick, who resigned from the College of Cardinals, in 2004. On Sept. 14, ten students delivered a petition to the office of President DeGioia demanding the university revoke those honorary degrees. It has gained 1,507 signatures as of Oct. 17.

The university stated that it will conduct “processes to address the deeply troubling revelations about Archbishop McCarrick” through an honorary degree review process, but did not respond as to whether this included Wuerl. Wuerl has spoken several times at the university, including twice in the fall of 2017.

“As part of our University’s governance practices, President DeGioia has worked with our Board of Directors to assemble an ad hoc Working Group of Board Members to examine the issues related to Honorary Degrees,” a university spokesperson wrote in an email to The Hoya. “This group will focus on the purpose and practice of granting Honorary Degrees; the selection of recipients; and the process around reviewing and rescinding such degrees.”

Wuerl, an ally of Pope Francis, previously developed a reputation as a reformer willing to address sexual abuse in the church. After arriving in Pittsburgh in 1988, he formed a review board for cases of sexual abuse and worked to extend the canonical statute of limitations on allegations from children. He also successfully lobbied the Vatican to prevent the reinstatement of a priest accused of molestation in 1993.

Yet the Pennsylvania grand jury report detailed moves by Wuerl that obscured the extent of sexual abuse and allowed priests accused of sexual abuse to continue in clerical roles.

Wuerl “was actively engaged in the cover-up,” according to the Attorney General of Pennsylvania, Josh Shapiro, in an interview with The Washington Post.

Wuerl maintains a group of supporters that defend his actions in the Pittsburgh diocese. The Archdiocese of Washington released a statement after the report’s release disputing certain elements and defending Wuerl’s tenure.

“While I understand this Report may be critical of some of my actions, I believe the Report confirms that I acted with diligence, with concern for the victims and to prevent future acts of abuse,” Wuerl said in a statement after the report.

Pope Francis’s letter is cryptic, and doesn’t necessarily make clear where the Pope is saying Wuerl did the right thing in resigning, according to Gerard Mannion, Amaturo professor in Catholic Studies at Georgetown University. Mannion also noted that the amount of time before the Vatican took action regarding Wuerl was “a pity.”

“It seems to suggest they do acknowledge Wuerl was not uniformly complicit, nor was he uniformly transparent and doing the right thing neither,” Mannion said in an interview with The Hoya.

Wuerl released a statement after Pope Francis’s acceptance of his resignation, which he offered when he passed the age of 75 as is customary, saying his move allowed the church to move forward.

“Once again for any past errors in judgment I apologize and ask for pardon,” Wuerl wrote. “My resignation is one way to express my great and abiding love for you the people of the Church of Washington.”

The resignation of Wuerl comes less than a week after Pope Francis sanctioned deeper investigation into allegations of sexual abuse against former Cardinal McCarrick. He resigned in July from the College of Cardinals and remains the archbishop emeritus of D.C.