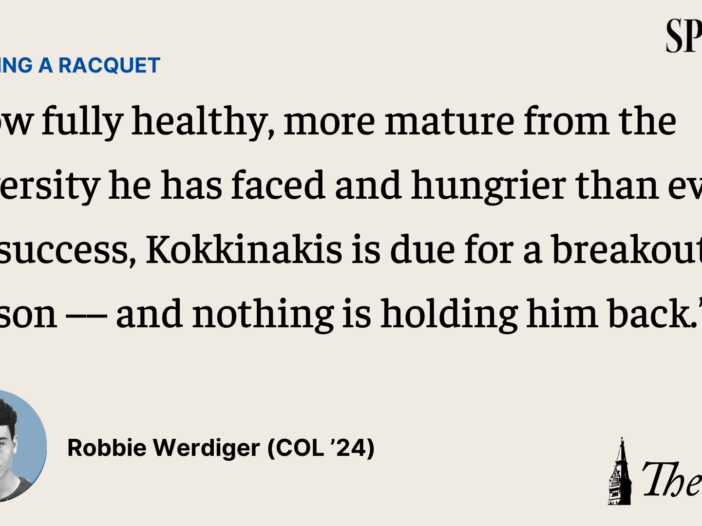 Thanasi Kokkinakis is not yet a household name in the tennis world but is poised to establish himself among the sport’s best by the end of 2022. Betrayed by his body through most of his professional career, the once acclaimed junior prodigy is now back on track to reaching his full potential.

Though he fell in the first round of the Australian Open, the Kokk, as he calls himself on Instagram, had won 8 of his first 9 matches in the 2022 Association of Tennis Professionals (ATP) season. By this time next year, the 25-year-old Australian will likely be seeded for tournaments, an honor reserved for tennis’s top 32 players.

While Kokkinakis is just emerging, Nick Kyrgios has been at the forefront of Australian tennis for years. He has beaten the likes of Roger Federer, Rafael Nadal and Novak Djokovic on his way to international stardom, and the crowd-pleasing Aussie is often the center of attention when he competes. The so-called “bad boy” of tennis is a recognizable figure even outside the tennis world.

Few people know that Kokkinakis and Kyrgios were both deemed the golden boys of Australian tennis. Kyrgios defeated Kokkinakis in the first all-Australian 2013 Australian Open boys’ singles final, and both juniors seemed destined for ATP success. The two flashy stars were junior rivals and remain best mates and doubles partners.

In 2016, Kyrgios lived up to expectations and reached No. 13 in the world. At just 18-years-old in 2015, Kokkinakis was ranked No. 69 in the world. For both players, it seemed their careers were set on an uphill trajectory. Those rankings, however, remain all-time highs for both Kyrgios and Kokkinakis.

Kyrgios plateaued because of his poor work ethic, turbulent attitude and ostensible lack of passion for the game. Kokkinakis, on the other hand, trains hard in practice, is level-headed on the court and has been commended for the respect he shows his opponents.

“I will say I am very impressed with Thanasi,” former Australian world No. 1 Pat Rafter said in 2015. “I love his attitude. He may not have that raw, gifted talent as much as a Tomic and Kyrgios, but he’s not far off.”

Despite Kokkinakis’ devotion to improving his game, he has not been able to play much tennis in the past five years. The 25-year-old has suffered a nightmarish slate of injuries and illnesses –– shoulder, pectoral, groin, knee, elbow, mono, glandular fever, etc. –– that has sidelined him for most of the last few ATP seasons.

But when he was actually able to compete, the powerful young Aussie was a dark horse. For example, in 2018, he became the lowest-ranked player at No. 175 to beat a world number one in 15 years after defeating Roger Federer at the Miami Open.

Kokkinakis has spoken about experiencing depression when he could not compete and even contemplating quitting the sport.

“I would just be crying in my room for no reason,” he said. “I would get anxiety just going for a walk when there was no one in the vicinity of 100 meters from me.”

Last year, Kokkinakis was on the road playing mostly lower-level challenger tournaments in a difficult and chaotic COVID-19 season. His results earned him a nomination for ATP’s Comeback Player of the Year, and Kokkinakis is hungry for more –– he knows he can challenge for titles in the major leagues. In the second round of the 2021 Australian Open, the wildcard pushed fifth-seeded Stefanos Tsitsipas to five sets in an epic showdown.

“He has a huge forehand, very good serve,” Tsitsipas said. “All the potential is there. I really hope he stays injury-free.”

Now fully healthy, more mature from the adversity he has faced and hungrier than ever for success, Kokkinakis is due for a breakout season –– and nothing is holding him back. The Aussie has started off 2022 strong, capturing his maiden ATP title in his hometown of Adelaide. With those results, Kokkinakis has jumped to No. 103 in the rankings after starting the year at No. 171.

However, all those hours on court took their toll on the hopeful Kokkinakis at the Australian Open. Playing with only one day between tournaments, the newly crowned ATP champion was noticeably fatigued and out of rhythm in his first round loss to German qualifier Yannick Hanfmann. Although the result was disappointing, Kokkinakis should look to build on this momentum.

Kokkinakis has the tools to crack the top 20 and is a player to follow throughout the year. At 25, he still has plenty of tennis to play, but the Kokk’s grueling journey back to the big stage, contagious optimism and persistence make it impossible to root against him.

Robbie Werdiger is a sophomore in the College. Causing a Racquet appears online and in print every other week.