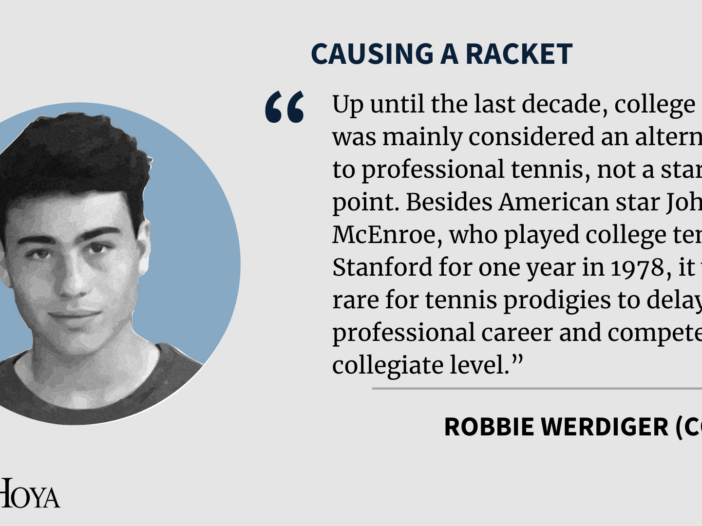 Unlike most other professional sports, there is no draft in tennis, and there are no scouts from the Association of Tennis Professionals who can recruit NCAA tennis players. Tennis is an individual sport with few guidelines regarding how players should kickstart their professional careers. A professional’s career is entirely up to them; there is no conventional route to take.

Up until the last decade, college tennis was mainly considered an alternative to professional tennis, not a starting point. Besides American star John McEnroe, who played college tennis at Stanford for one year in 1978, it was rare for tennis prodigies to delay their professional career and compete on the collegiate level.

Recently, however, this sentiment has changed. Various tennis players have followed successful NCAA careers with illustrious professional careers. John Isner was a four-time All-American at Georgia from 2004-07 before becoming a perennial threat at the Grand Slams.

Isner’s most impressive result came at Wimbledon in 2018, where he lost to former Illinois standout Kevin Anderson in the semifinals. From this, Anderson reached a career-high ranking of fifth in the world and made his second Grand Slam final.

American tennis player Steve Johnson, formerly ranked in the top 25 on the ATP tour, played at Southern California. California native Mackenzie McDonald won the NCAA tournament in 2016, representing the UCLA Bruins. He recently made the fourth round of the Australian Open.

However, most top-ranked players never played in college, and yet they were still able to reach their full potential and achieve international success. This discrepancy raises the question of who should play college tennis and why.

All professional tennis players must build their way up to major tournaments. The lowest professional tournaments, known as futures and challengers, are organized separately from the ATP tour, attract few fans and offer minimal prize money. However, they do provide valuable international ranking points and professional experience for competing players.

Young tennis prodigies who find immediate success at challenger events and win a few titles most likely do not need to go to college to develop their games. Players who demonstrate they can compete with those ranked inside the top 100 and sneak a few good wins in ATP-level events are well positioned to climb the rankings quickly and earn big prize money.

On the other hand, players that struggle to win matches early on in challengers and futures should consider playing college tennis. Such players likely have not yet reached their full potential and are not ready for the professional circuit. They can certainly benefit from playing tennis at the NCAA level and racking up dozens of match wins against top competition to build confidence.

Cameron Norrie is another player who took advantage of the college stage and greatly improved his game. Norrie received a scholarship from Texas Christian University and played tennis for the Horned Frogs from 2014 to 2017, becoming the top-ranked college player in the nation. At age 25, Norrie is entering his prime, and has reached a career-high ranking of 41 in the world. Norrie is one of many international players hoping to launch professional careers who have capitalized on the opportunity to earn a college degree and develop their tennis game for four years.

The high monetary value of a tennis scholarship at a top-ranked program is also hard to reject. For unsponsored players paying for their travels out of their own pocket, entering the ATP tour too early is a recipe for financial ruin. A minor circuit player will lose money from competing at a professional level too early and may run out of funds before reaching their prime. The smarter financial decision for lower-ranked players on a restricted budget is to attend college on a scholarship.

Players can be flexible and don’t have to commit to college for all four years. Many top-ranked collegiate players turn professional after three or fewer years and can oftentimes arrange a deal to come back and finish their degrees at some point in the future.

Lastly, college tennis can help burnt out athletes who have trained their whole lives regain their love and passion for the sport. The team atmosphere is a healthy contrast to the individual nature of competitive tennis, according to retired professional player and Stanford Men’s Head Coach Paul Goldstein. Players rejoice in the opportunity to cheer on their teammates and play in front of dedicated home fans.

“I matured in college,” Isner said of his college experience. “I got the partying out of my system in college. It’s something that you can’t afford to do on the pro tour. I enjoyed my time there. Georgia is an amazing school. I tried to lead as much of a normal college life as possible. Of course we had tennis, we had practice all the time, we had gym all the time, we had class.”

College tennis certainly has its perks. For any American or foreign player uncertain about their future, the collegiate game might be the perfect platform. Why pass on an opportunity to improve your level at a reduced cost, experience a fun and unique side of tennis, and explore future career options? However, if you’re a junior prodigy from a wealthy family like Taylor Fritz, life on tour isn’t too bad either.

Robbie Werdiger is a first-year in The College. Causing a Racket appears online every other week.