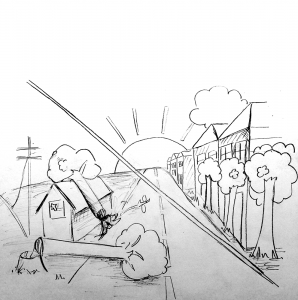 If this were an op-ed about leaving, I’d be two months too late — the “official remembrances” of Katrina: citywide commemorations, the flood (no pun intended) of news articles and prime-time and ten year “specials” are already a thing of the recent past. But this piece isn’t about leaving; it’s about coming home.

In the interest of full disclosure, I barely remember Aug. 29, 2005, the day that has become ingrained into our collective memory as the date of one of the greatest natural disasters in American history. Huddled with my family and hundreds of other displaced people in a Holiday Inn in Oxford, Miss., I was for the most part both physically and mentally removed from the quickly deteriorating conditions at home, as my parents made a point during the evacuations of keeping my brother and me away from the disaster pornography that evening news sites packaged as “extreme weather updates.”

For me, therefore, Katrina will always be associated with late October, as my parents packed up the room of our (different) Holiday Inn in Opelousas, La. The single constant in our lives up until that point had been the presence of each other and our remarkable talent for finding the best gas station barbecue that south Louisiana had to offer.

We packed for three days. We were displaced from New Orleans for two months and four days; from our flooded home, nearly two years. Yet those facts say nothing of the spaces in between, the people who unsuspectingly willed themselves into our lives in our time of need — a Mississippi couple who offered us their backhouse for a penny, the staff of every Holiday Inn in which we stayed (four total) who put up with me and my brother running around the lobby in our pajamas, the countless church dinners, clothing giveaways and words of kindness from complete strangers and, even now, the individuals who continue to shape the New Orleans of 2015.

[email protected] reflects the work of several of these individuals. On Friday, the conference will tease out, over three panels, the role of Hurricane Katrina in our understanding of media, collective memory, history and social justice via a diverse array of speakers, a documentary screening and a discussion and jazz performance by the acclaimed Donald Harrison, Jr.

This is not a conference about leaving, but about coming home and some of the many difficulties and decisions with which we have grappled in this endeavor. I feel that it is so significant for us to be holding the conference at this time — just when so many of us first begin to come home.

There are the seemingly simple questions we asked, like which flood insurance policy to get (answer: likely no one will insure you); and then the harder ones — how do we incorporate sustainability into the rebuilding process, ensure the fair treatment of day laborers, construct a socially just city that is true to our rich culture yet still reflects complex understandings of socioeconomics, race and class relations?

Right now, in the midst of soaring housing prices and encroaching gentrification, there are questions about our identity as a city. Yet, I’d like to think at the very least, we still bear some resemblance to journalist Chris Rose’s characterization of New Orleanians in his post-Katrina work, “One Dead in Attic”: “We dance even if there’s no radio. We drink at funerals. We talk too much and laugh too loud and frankly, we’re suspicious of others who don’t.”

This conference should not be the end-all, be-all for Georgetown’s conversation about Katrina and the ongoing rebirth of one of the greatest cities in America. There are New Orleanians and southeast Louisianans all over this campus. During Carnival season, you can spot us by our obvious purple, green and gold apparel or the occasional sporting of Brees/Bush-era Saints gear, but for the most part, we are just present. Do not shirk away from asking us our story. Although many of us bore witness to destruction, we have also born witness to rebuilding and renewal. We are fiercely loyal to our city and way of life — one that continues to be threatened by political ineptitude, poorly engineered levees and receding wetlands, but which nevertheless unites us in a common narrative.

Because in New Orleans, if you’re not related by blood, you’re related by association: from Red Bean Mondays and Mardi Gras Tuesdays to cries of “Who dat” and “Where y’at?”, to where ya went to high school which is probably where ya mama n dem did too.

[email protected] is a chance for others to tell their story, to talk about what it means to go home, to tap into this collective memory. It is also a critical call to action, an understanding that there is still much work left to be done and that the new New Orleans is, very much, still 10 years young.

Madison Ashley is a senior in the School of Foreign Service and a contributing editor to the Hoya.