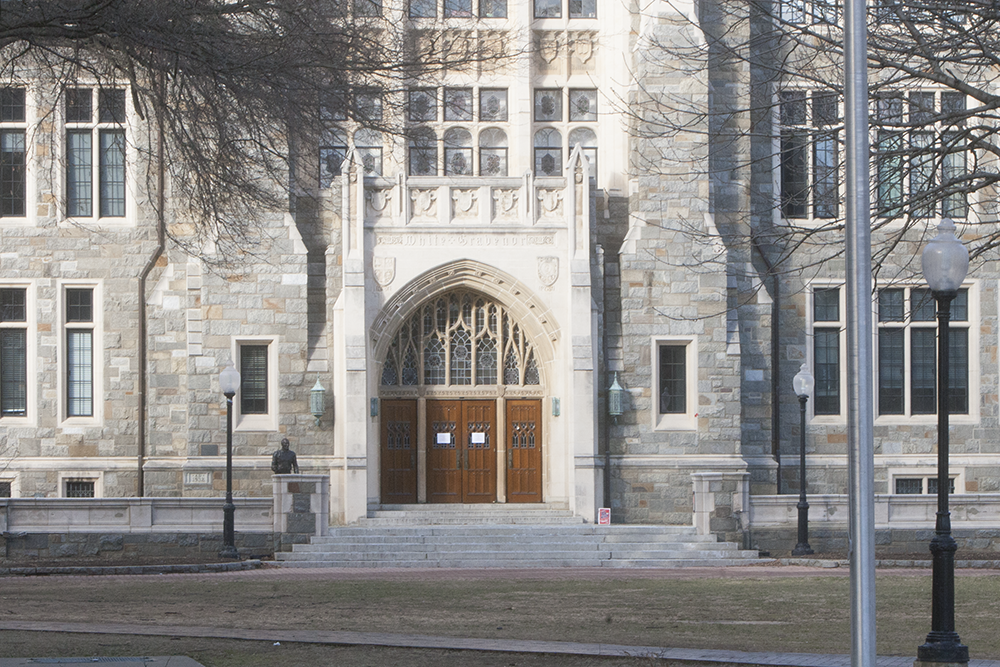 Georgetown University is set to construct a ramp to the entrance of White-Gravenor Hall to increase accessibility to the academic building.

An upcoming renovation initiative aims to make White-Gravenor Hall more accessible by constructing a ramp to the front entrance of the building. The goal of the project is to create a “barrier-free, [Americans with Disabilities Act] accessible entry while meeting best historic preservation practices,” according to a university spokesperson. The project’s design is expected to be completed by early 2019, and construction is set to start in the summer of 2019, the spokesperson said.

The main entrance to White-Gravenor currently requires the use of stairs, which presents challenges for students who use mobility aids. White-Gravenor’s only current ramp is at a far corner of the building and leads into the basement.

Anna Landre (SFS ’21), who is the chair of Georgetown University Student Association’s accessibility team and uses a wheelchair, has experienced difficulty with White-Gravenor’s current layout.

“I’ve had issues with not being able to get into certain club meetings because a lot of times they lock the accessible entrance after hours and they don’t lock the front door — I don’t know why,” Landre said. “And then at night [the accessible entrance is] not very well-lit because it’s not, you know, a well-trafficked area of campus. It’s a place that — you’re only there at night if you need to get into White-Gravenor at night and you have a disability.”

The Old Georgetown Board, a committee of architects appointed by the U.S. Commission of Fine Arts, an agency that oversees the design of all construction in D.C., granted concept to the project in February 2018 after the university filed for an application with Washington, D.C.’s Department of Consumer and Regulatory Affairs. All proposed projects in the Old Georgetown historic district, which encompasses the entire Georgetown neighborhood, must receive design review from the OGB.

The OGB  approved the permit application at its meeting in November after having previously returned it to the University for design review. The design will now go to the CFA for review at its Nov. 15 meeting before Georgetown can begin construction of the ramp.

The planning for this project required more consideration than the university’s other concurrent projects because of White-Gravenor’s prominent role in the appearance and history of Georgetown’s campus, according to CFA Secretary Thomas Luebke.

“It involves changes to historic building fabric in one of the most sensitive contexts of the university,” he said.

“Is the entrance to this historical building what is really historical?” he said. “It needs to be accessible, and the needs of people to actually easily access it outweigh the concern of needing to be historical.”

Student activism and input have been crucial forces in prompting the university to update their accessibility standards and policies, according to Farrara and Landre. Input from students with disabilities and GUSA members was considered in the construction of the ramp, and both Landre and Farrara have helped to advise the university on how best to improve accessibility in White-Gravenor and across campus more generally.

Though she believes Georgetown still has much progress to make, Landre is optimistic about the signal that this latest project sends to students.

“We can’t underestimate the symbolism of something like the front entrance to a building, in terms of inclusion.”