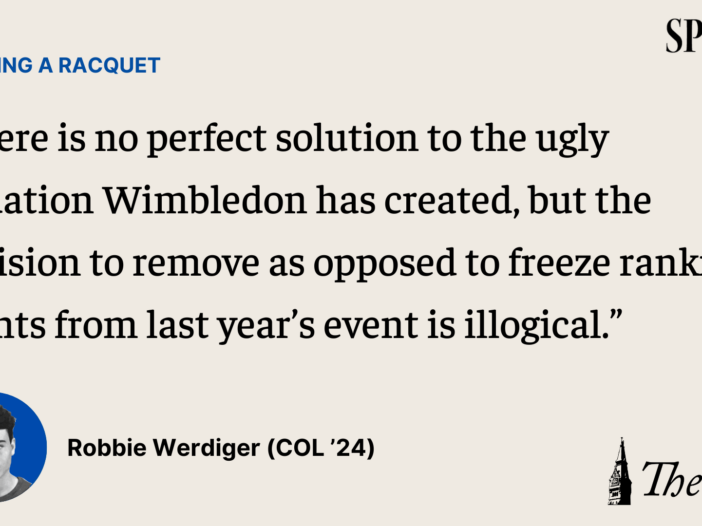 In the days before Russia’s invasion of Ukraine in February 2022, Russian tennis player Andrey Rublev used his global platform to spread a message about this impending invasion. After winning a semifinal match in the Dubai Championships, he wrote “No War Please” on a TV camera lens. Months after that sentiment was ignored and the war was underway, Wimbledon banned Russian and Belarusian players from participating in its tournaments, sparking international outrage.

The ban was uncalled for and discriminatory, but the decision by the ATP and WTA to strip the event of ranking points is disastrous for players who had success at the tournament last year.

Wimbledon’s decision stemmed from concerns over bad optics if a member of the British royal family had to present a trophy to a Russian or Belarusian player. Moreover, there was concern from the All England Club that the Russian government could use their players’ success at Wimbledon as propaganda to support their war efforts.

Meanwhile, the rest of the Association of Tennis Professionals (ATP) and Women’s Tennis Association (WTA) tours allowed Russian and Belarusian players to compete without displaying their flags. They noted how professional tennis players are independent contractors and have the right to work despite the actions of their governments.

This decision placed them in opposition to the All England Club’s more extreme approach. Consequently, the ATP and WTA tours have punished Wimbledon — the third of four grand slams — by stripping it of its ranking points. Not only do the tours condemn the ban on Russian players from a moral standpoint, but they also recognize a potential breach in the players’ ranking agreements.

Despite the ATP and WTA’s virtuous intentions, their punishment of the All England Club is quite unfair to certain players. Ranking points will not carry over from last year’s tournament, as was the case when Wimbledon was suspended in 2020 due to COVID-19. Instead, players will lose all points for the event with no chance to defend or replace them.

Reigning men’s singles champion Novak Djokovic will automatically lose 2,000 points no matter his result, which will ironically cause him to lose the No. 1 ranking to Daniil Medvedev and drop outside the top 5 in the ATP rankings. Last year’s finalist Matteo Berrettini, who has already missed much of the year due to injury, will drop out of the top 10 and likely much lower without the opportunity to defend his points. Former top 10 player Denis Shapovolov loses all his 2021 semi-final points and will likely drop outside the top 20.

Perhaps most drastically, journeyman Marton Fucsovic, who defeated three seeds en route to an unlikely 2021 quarterfinal run, will drop well outside the top 100. As a result, he will now have to qualify for bigger events and play lower-level tournaments.

Former World No. 1 Naomi Osaka, who has seen her ranking slip outside the top 30, spoke about the effects of this punishment on players’ view of Wimbledon.

“I’m not sure why, but if I play Wimbledon without points, it’s more like an exhibition,” Osaka said in an interview with The Guardian. She admitted that she might skip the tournament for another event to boost her ranking. There will likely be others who follow Osaka’s path.

Two-time men’s singles Wimbledon champion Andy Murray quickly clapped back against Osaka’s opinion on Twitter, stating that Wimbledon is a special event that will never feel like an exhibition. He argued that most viewers care more about the winner than the points anyways. In addition, a large purse of prize money is still on the line, which many players are not willing to turn down by leaving the competition.

There is no perfect solution to the ugly situation Wimbledon has created, but the decision to remove as opposed to freeze ranking points from last year’s event is illogical. As a result, the ATP and WTA rankings will drastically change in the next month and not accurately reflect the current form of the world’s best. Wimbledon will take a major public relations hit, and the entry list for one of the most popular tournaments remains fraught with uncertainty.

Robbie Werdiger is a rising junior in the College. Causing a Racquet appears online every other week.