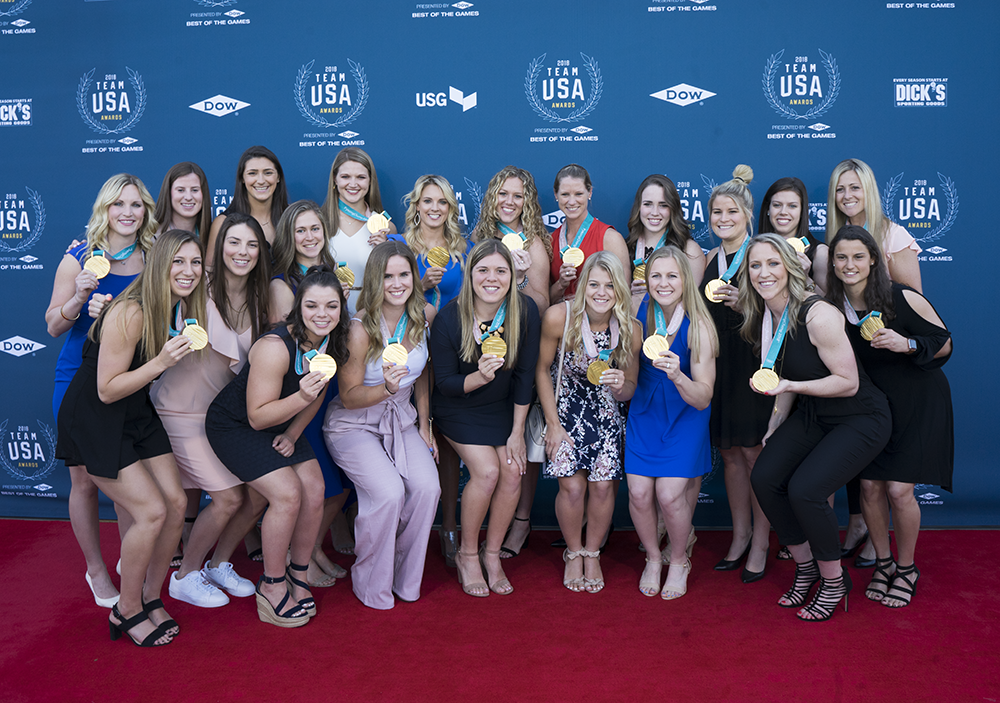 The Team USA Awards Ceremony, hosted at the Duke Ellington School of the Arts northeast of campus April 26, recognized Winter Olympic and Paralympic athletes for their outstanding performances at the 2018 games in Pyeongchang, South Korea.

Awards were given in eight categories, and the winners were determined by online fan voting and representatives from the Olympic and Paralympic committees.

Athletes and guests entered the venue on a red carpet before the awards show, emceed by NBC sportscaster Mike Tirico. A Duke Ellington senior kicked off the awards ceremony with the national anthem, after which a film of highlights from the Olympics played for the audience.

The U.S. Olympic Committee has organized the Team USA Awards ceremony since 1974.

The women’s hockey team and the sled hockey team were honored for their contributions in team sports at the winter games. Tom Kelly, vice president of communications for the U.S. Ski and Snowboard Association, received the USG Building Dreams Award for outstanding contributions to Team USA, and Kristi Yamaguchi, a two-time Olympic silver medalist in figure skating, accepted the Jesse Owens Olympic Spirit Award for her work promoting early childhood literacy worldwide through the creation of the Always Dream Foundation, a program passed in 2012 to increase the availability of reading materials for children.
Yamaguchi said in her acceptance speech that her success at the Olympics combined with the influence of her family inspired her to turn to philanthropy.

“That realization of fulfilling a lifelong dream is something that I feel so fortunate and grateful for every single day,” Yamaguchi said in her acceptance speech. “I feel like I focused on my own goals for so long, and of course I was excited to finally reach that at the age of 20, and then my mother’s question right after the Olympics: ‘What are you going to do to give back?’”

Cnossen, a former Navy SEAL and 2018 Male Paralympic Athlete of the Games, said that teamwork and friendship drew him and many other veterans to the Paralympics.

“I think overall, it’s the camaraderie with the team,” Cnossen said during his acceptance speech. “After being in the military, a lot of the veterans have found the program to be quite meaningful. I think what it comes down to is teamwork. And that’s what we see, and what we love, and what keeps us doing this.”

Before the ceremony, U.S. women’s hockey team captain Megan Duggan expressed her pride in her team’s growth after the Olympics in Sochi, Russia, in 2014, where the team placed second after losing in an overtime shootout to Canada. The team won gold in Pyeongchang this year.

“One of the biggest things I would say is we looked [at] ourselves in the mirror and asked ourselves questions like, ‘Why have we come up short of our ultimate goal? And what are we made of?’” Duggan said in an interview with The Hoya. “And when we were able to answer these questions and really challenge each other, day in and day out, on and off the ice, mentally, physically, we were able to get closer to getting our goal of winning the gold medal.”
Duggan said that the success of her team helped bring the sport into the spotlight and changed hockey in the United States by inspiring more girls to join teams.

“I think that it has really changed our sport in this country, and it will continue, and you look at numbers of girls that are registering for the sport, and the numbers are skyrocketing, and we take great pride in that,” Duggan said.