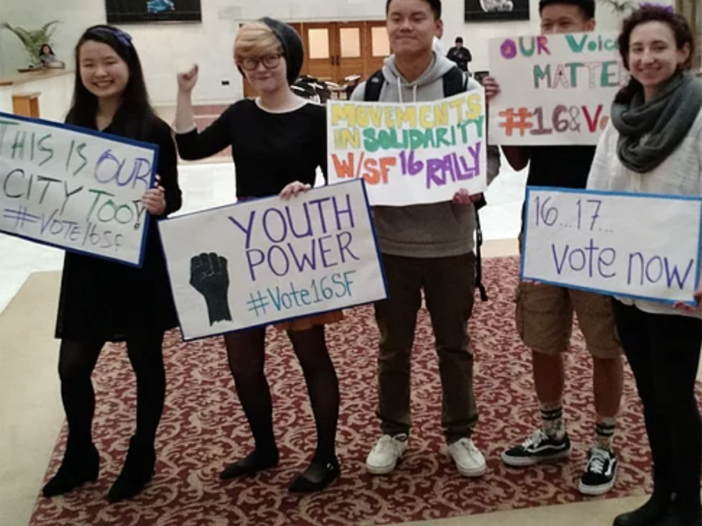 Five years ago, if someone asked 13-year-old Arianna Nassiri (COL ’24) if teenagers three years her senior should be allowed to vote, she would have said, “They’re kids, they’re immature.”

But then, she read the United States Constitution.

“Social maturity is not a grounds for enfranchisement or disenfranchisement, because if that were the case, there are millions of enfranchised adults who I would deem immature,” Nassiri, now a college freshman, said in a Zoom interview with The Hoya. “It’s not what our Founding Fathers wanted.”

Today, Nassiri is a campaign chair and communications representative for the Vote16 San Francisco initiative, a proposition that appears on 2020 election ballots urging the city to allow 16- and 17-year-olds to vote in municipal elections.

In 2015, the San Francisco Youth Commission, a body of 17 representatives between the ages of 12 and 23 who advise the city’s Board of Supervisors and Mayor on policies that directly impact young people, launched the Vote16 movement after passing a resolution calling for the enfranchisement of 16 and 17 year olds.

The reform proposition first appeared on San Francisco ballots in 2016, where it earned 48 percent of the vote, just shy of the 50 percent threshold it needed to pass. Since then, the city’s Board of Education and Board of Supervisors have endorsed the initiative and, should it pass in November, San Francisco would be the first major city to lower the voting age to 16 for local elections.

Nassiri joined the campaign the same year, shortly after the initiative’s failure on the ballot. Now, she is helping organize a citywide campaign to rally public support for Vote16 SF.

The youth enthusiasm Nassiri has seen over the past three years demonstrates how ready young people are to actively participate in local politics.

“I think that a lot of officials and just community members are starting to realize that young people are citizens, are actively due paying citizens, and participating in ways that most adults are not even participating in,” Nassiri said.

Voters who oppose lowering the voting age often cite a lack of maturity and experience as reasons why the legal voting age should remain at 18 (the same logic Nassiri applied when she was 13). However, many of San Francisco’s most politically active citizens are young, according to Nassiri. Nassiri is an example of this, as she serves on the city’s Youth Commission and worked as an intern for Mayor London Breed.

“This argument that age has a direct correlation to one’s political maturity is just no longer valid,” she said. “Young people are actively participating citizens and are members of that population and it’s unjust to disenfranchise them just based on how many years they’ve been on the planet.”

Nassiri’s interest in politics and advocacy is in part what drew her to Georgetown University. As an activist, having a community of like-minded students was important, she said.

“Knowing that there are a couple thousand [students] in my class alone that are engaging in these fights in their local communities as well for different initiatives, that we’re all aware of this education and the power that this education holds, is hopeful for me,” Nassiri said.

Though not all of her classmates support expanding local enfranchisement, coming to Georgetown has allowed Nassiri to better understand the importance of civics education. People have accepted that political progress is slow and laborious, but if more young people had exposure to comprehensive education on their role in local government, that could change, Nassiri said.

“The American Constitution was written to be amenable,” she said. “It’s written so it can be amended to reflect the changing demographic of America, and that’s a gift.”

If the Vote16 SF proposition is passed, the city is set to implement a required civics education curriculum in public schools, according to a San Francisco Youth Commission report published in 2019.

Nassiri’s work with Vote16 SF is part of a broader movement across the country to lower the voting age for local elections. Generation Citizen, an organization dedicated to expanding civics education, has thrown its weight behind Nassiri’s campaign and others like it across the country.

Passing Vote16 in San Francisco would be an important step in bringing national awareness to the conversation of expanding enfranchisement, according to Brandon Klugman, the Vote16 USA campaign manager at Generation Citizen.

“Places like San Francisco passing it and successfully implementing it would go a long way in proving that this works and that it’s an idea worth taking seriously,” Klugman said in a phone interview with The Hoya. “And so as it becomes more mainstream maybe we can have a more tangible conversation about what it would look like to push for it on a larger level, but I think we’re not quite there yet.”

While Nassiri fully supports lowering the voting age for local elections, she is unsure about the steps it would take to lower the federal voting age to 16.

For now, attending online classes from her home in San Francisco, Nassiri is eager to finally arrive on campus and join the activist community in-person at Georgetown.

“Though I haven’t even brought myself to Georgetown, there’s a level of hope I have and enthusiasm I have to come to D.C. and to learn about all the work these other activists are doing,” Nassiri said.