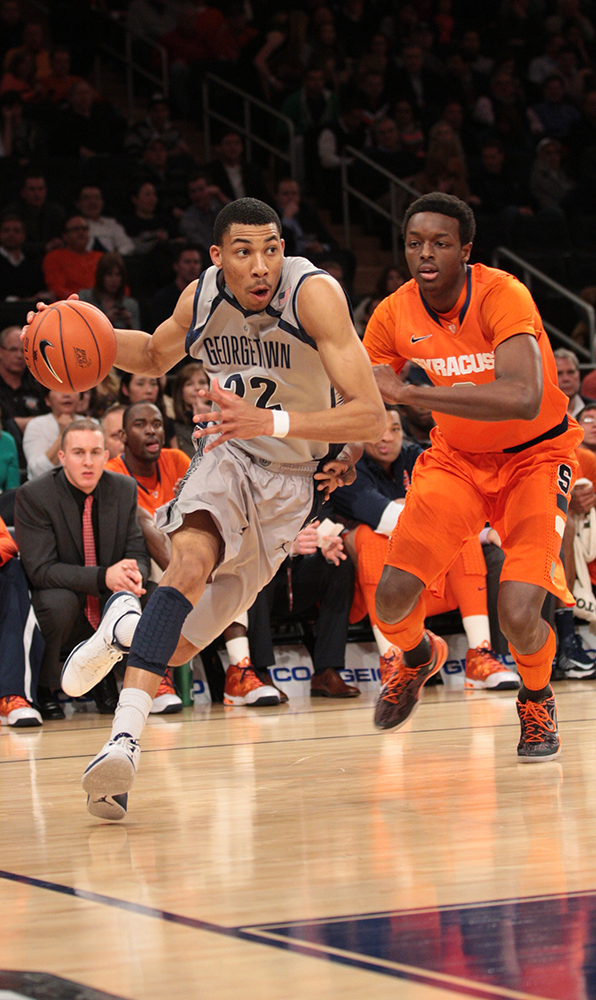 Last year, forward Otto Porter completed his rookie season as a Washington Wizard with just 319 minutes played in 37 games. He finished with 78 points on a lackluster 33-91 shooting, his debut delayed by a hip flexor injury. Overall, his performance caused many Washington fans familiar with a history of frustrating draft picks to declare the third overall pick a bust.

Five games into the 2014-15 NBA season, the Wizards are 4-1, and Porter’s numbers are starting to tell a different story. In 129 minutes, Porter has 45 points, including a 21-point eruption in the second half of Washington’s home opener against the Milwaukee Bucks last Saturday.

A week into the regular season is quite early to make assumptions about Porter’s new role with the team. Injuries to guard Bradley Beal and small forward Martell Webster have forced some bench players to step up for the early part of the season, and rotations are still in flux. But developments over the summer and early in the season indicate a much bigger role for Porter than what he saw a year ago.

Porter started turning heads in Las Vegas at the NBA Summer League, leading the Wizards to the semifinal game of the July tournament along with fellow sophomore Glenn Rice Jr. Then the free-agency changes that resulted in an exit for Trevor Ariza and entrance of 37-year-old Paul Pierce opened up some space in the rotation at forward, while some early injuries have also given Porter a chance for some minutes.

“Paul Pierce will not average 30 to 35 minutes like [former starting forward Trevor] Ariza can, and has done,” Washington Post Wizards beat reporter Jorge Castillo told The Hoya. “Also, Bradley Beal being hurt has put another void on the wing that Otto’s seeing a lot of time at.”

In those increased minutes, Porter has put an improved mid-range jump shot on display in a swingman role. The 6-foot-9-inch Georgetown product has showcased an ability to knock down shots exactly where the Wizards offense needs them. The Wizards lost a perimeter threat, capable of driving to the basket, in Ariza. In a system driven by the ball-handling and assists of star point guard John Wall, Porter has the skill set to play a central role like Ariza, moving around on the wings to create open shot opportunities.

The Wizards have been patient because they drafted him in the lottery last year. The team picked up Porter’s contract option for the 2015-16 season over the summer, and his spot behind Pierce has solidified his presence in the rotation. His 21-point outburst last Saturday came after Pierce was ejected for a technical foul late in the second quarter. Porter began the third quarter on the court and notched 19 points in the half, scoring on everything from baseline threes to an alley-oop feed by Wall.

“It’s all about confidence with him, and he’s a lot more confident this season,” Castillo said. “He’s being more aggressive … that’s the biggest thing [the coaching staff is] saying.”

At this early juncture in the season, Porter’s future role with the Wizards is not clearly laid out. The absences of Beal, the shooting guard and central counterpart to Wall in the backcourt, and wing presence Webster were important in opening up minutes for Porter. When Beal returns later this month, the rotations will be shifted, but as Webster’s return is still more than a month away, Porter’s contributions are still needed. For Castillo, Porter is in a solid position on the second unit and has the opportunity to improve his chances for increased playing time.

“Porter is in as Pierce’s main backup, he’s playing really well in the second unit and he’s been the second unit’s best player, him and Drew Gooden,” Castillo said. “I don’t expect Webster to come back for a month or two and to be honest, by then if Porter’s playing well I don’t see him coming out of the rotation.”

After five games, Porter is on pace to eclipse his statistical marks from the entire past season before the month is over. The simplest explanation for this is more time on the court. Porter came into his rookie season hampered by injury and got swept along with a playoff run by a team that did not have a lot of minutes to lend to unproven rookies.

But now number 22 sits a little higher on the depth charts and has shown some value in the minutes he’s been given. While five games isn’t a large sample size, the door is certainly open for Otto Porter in Washington. As the season progresses, Georgetown fans will be seeing a lot more of one of their favorite alums as he once again makes his mark at the Verizon Center.

This is the first part of a two-part series on Otto Porter’s play with the Washington Wizards. Part two will feature a more personal look at Porter’s progression, including an exclusive interview with Porter. Part two will run Nov. 14.