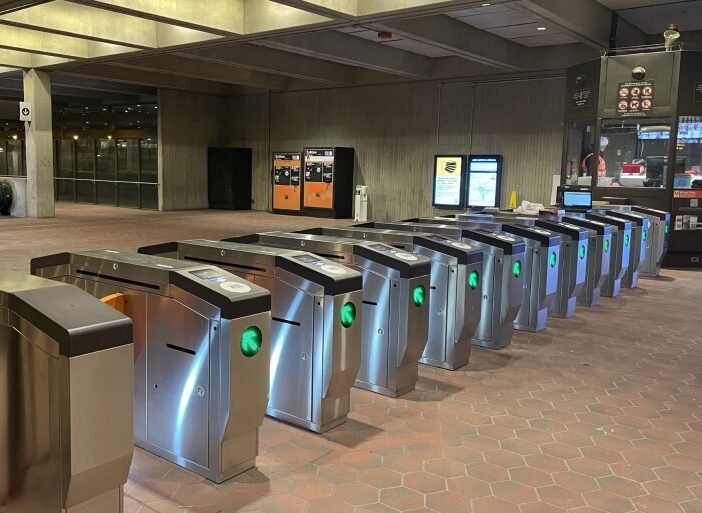 WMATA installed two types of new gates at the Fort Totten station as part of an effort to make up for tens of millions of dollars of lost revenue from fare evasion this fiscal year. Half of the new faregates feature saloon-style doors that rise higher than the previous barriers, and the other half include rounded additions to the sides of the gates to prevent riders from using their hands to push up and over the barrier.

“The idea is how do we make the system as fair as possible, try to actually not have people do fare evasion, and at the same time, be realistic that we are a transit system,” Clarke said at the Nov. 17 Metro board of directors meeting.

Fare evasion affects WMATA’s ability to operate, according to a WMATA press release from Oct. 28.

“Revenue from fares allows Metro to keep buses, trains, and MetroAccess serving our community,” WMATA wrote in the press release.

Amy Zhou (COL ’22, MED ’26) takes the Metro often and said she frequently sees passengers avoiding the fares on the Metro with no consequences.

“I see people doing it and jumping over the gate, and there’s a security officer right there,” Zhou told The Hoya. “They don’t seem to care that much.”

Metro launched a warning campaign Oct. 4 to raise awareness about citations and fines that riders who evade fares can receive from Metro Transit Police (MTPD) officers. MTPD officers began issuing these citations to anyone they saw jumping the faregates, using the emergency gates or not tapping fare boxes on Metrobuses starting Nov. 1.

According to Clarke, WMATA considered several criteria when creating both designs.

“So a) we want to make it so whatever we put on there didn’t cause a potential safety hazard, and b) it can’t collect trash and debris and other things of that nature, and it couldn’t obviously protrude into the gate itself because that could be an ADA or safety issue by catching someone’s bag or coat or whatnot,” Clarke said at the meeting.

The board approved two different faregate designs in order to collect rider feedback on both versions, said Clarke.

“We need to be a learning organization — acknowledge where we’re doing something well, where we’re not, modifying, then keep moving forward,” Clarke said.

The first prototype, which features taller gate doors, will be more expensive to implement because it requires WMATA to alter the entire gate motor system, according to Clarke.

WMATA said it is exploring ways to keep the Metro affordable, and as part of the campaign, WMATA is partnering with local organizations to implement a low-income fare pilot program and to offer residents up to $100 in metro fares per month.

Clarke said the board will take their knowledge from this trial program and use them to improve WMATA’s offerings moving forward.