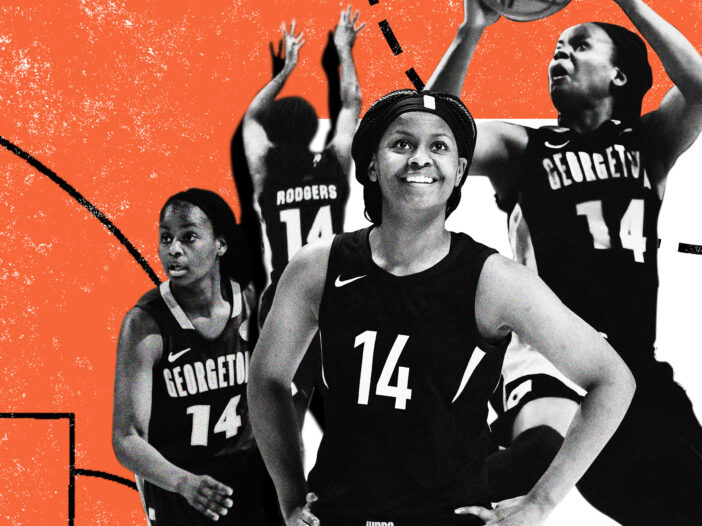 Sugar Rodgers never intended to be featured in the history books.

Rodgers (COL ’13, GRD ’21), who played for the women’s basketball team for four years from 2009 to 2013, came to Georgetown for its educational prestige. She looked to play basketball while pursuing a degree in English. Yet Rodgers graduated with not only a bachelor’s degree but also the Georgetown University basketball all-time points record.

“I didn’t even come on an official visit,” Rodgers said in an interview with The Hoya. “I just, like, got on Google, saw the top prestigious schools in the country and was like ‘I want to go here.’ It was the knowledge as power for me, and then basketball has just been a vehicle that has created opportunities for me.”

Now, after eight years in the WNBA playing for the Minnesota Lynx, New York Liberty and Las Vegas Aces, Rodgers has become an assistant coach for Georgetown women’s basketball and looks to boost the program that helped launch her career to the professional level a decade prior. Rodgers’ return to Georgetown signifies the arrival of a passionate and dedicated voice determined to elevate the women’s program.

“I got a taste of the pros and what it’s like, and once I got this opportunity, I was like ‘Okay, cool, I’m going to the collegiate level,’” Rodgers said. “This is kinda my forte. This is where I want to be, just helping young ladies develop into young women. I don’t look at myself as a basketball coach; I look at myself as a life coach.”

Before launching a professional career, in her time at Georgetown, Rodgers earned accolades, including Big East Rookie of the Year in 2010 and First Team All-Big East all four years. Georgetown reached the NCAA tournament three times with Rodgers, marking all but one of the program’s tournament appearances. Rodgers amassed 2,518 points at Georgetown, becoming the first Georgetown women’s basketball player to eclipse 2,000 career points and the first Georgetown basketball player to reach 2,500. Comparatively, Patrick Ewing (CAS ’85) ranks third in career points with 2,184.

The thought of competing for records with legends like Ewing is surreal to conceptualize, according to Rodgers.

“I came here to just get a great education, so that I could possibly get a great job after I finished,” said Rodgers. “I mean, I was just so good at basketball that I was able to make history in some of those things. It feels good to have all those things in the record book, but records can be broken.”

Rodgers racked up achievements well beyond her career at Georgetown. She became just the third player in Georgetown women’s basketball history to be drafted into the WNBA when she was selected 14th overall by the Lynx in 2013.

Rodgers won a WNBA title in her rookie season, appearing in five of the Lynx’s seven playoff games. Rodgers was traded to the New York Liberty in the offseason, where she remained until moving to the Las Vegas Aces in 2019. Rodgers made her first All-Star appearance in 2017, and the WNBA named her the Sixth Woman of the Year for her contributions off the bench that year.

Rodgers attributes her professional success to lessons learned throughout her time at Georgetown, adopting a dedicated mentality focused on work ethic.

“I had John Thompson who was just shaping me to be the woman I am,” said Rodgers. “A lot of things he said stuck with me on my journey to where I am now. No matter what happens, just keep going forward, keep pushing through. There’s going to be hard times, but at the end of the day, you can make it through.”

Rodgers admitted coaching at the collegiate level has been an adjustment, but she’s excited to impart wisdom to her players.

“I’m just happy to be back, hanging out, just being able to relate to the young ladies on the basketball team,” said Rodgers. “I think that’s a big thing as well because I sat in these same classrooms. So I’m not just speaking it, I’ve actually done everything that the ladies here are doing.”