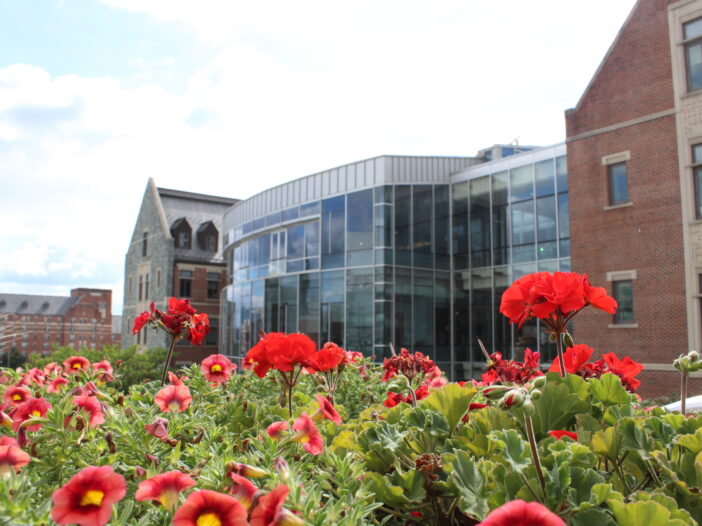 As a first-year student, Toni Marz (MSB ’26) has given the usual back-and-forth Georgetown introduction countless times to other new students since the start of the fall semester.

While her peers often assume that the McDonough School of Business (MSB) is filled with “finance bros,” Marz said her experience has been positive so far due to female peer mentorship.

“I did the pre-orientation program BUILD that’s specifically for business students, so I automatically met a bunch of girls,” Marz said. “Going into my classes the first day, I wasn’t nervous because I was like, ‘There’s going to be at least one BUILD person in all of my classes.’”

Business Undergraduates Invested in Leadership Development (BUILD) is a pre-orientation program aimed to acclimate incoming first-year business students to the college transition. Since 2013, it has served as a valuable foundation for students entering the MSB.

This program and other peer-to-peer and faculty-initiated mentorship endeavors help students, especially women, feel supported and ready to break into the male-dominated space of business.

The Georgetown Experience of Women in Business

As a finance major in a predominantly male environment, Kate Gilles (MSB ’23) said she feels the need to conform to the mannerisms of her male counterparts to make herself succeed, especially as there are never more than 10 or 11 women in her finance classes.

“Last year during COVID when everything was over Zoom, my roommates could hear me giving presentations, and my tone of voice totally switched,” Gilles told The Hoya. “I ended up speaking a lot deeper and in a different way than how I would speak when just talking to a friend or talking to a group of girls.”

This subconscious change is not uncommon among women in male-dominated fields like finance. A 2012 study published by The Royal Society found that both men and women with lower voices may have better success at achieving leadership positions.

When women fear that they lack legitimacy, they are often afraid of being wrong, Gilles said.

“I would say the biggest thing is I feel like women are a little bit more afraid to be wrong,” Gilles said. “Men will confidently say a wrong answer where, for me and a lot of other women, I know we want to be certain that we have the right answer.”

In group settings, Gilles said she often notes that she relinquishes agency of her voice and opinions.

“Working in breakout groups, I’ll be like, ‘Oh, I think it’s this,’ but I don’t really know, I’m not totally sure and kind of let other people sort of take control,” Gilles said. “Even if I am right, I’ll kind of preface it with an ‘I don’t know’ or ‘This might not be right.’”

For some women in the MSB, learning in a majority-male environment does not present any obstacles to engagement or participation. So far in her first year, Emma Crum (MSB ’26) has not noticed any issues in classroom dynamics despite the fact that they are clearly majority male.

“Personally, I don’t really think it affects anything,” Crum told The Hoya. “It’s acknowledged, but at the end of the day we’re all students.”

Jennie Bai, a finance professor involved in faculty recruitment for the MSB, whose “Global Financial Institutions” class has roughly 45 students, has not noticed any difference in participation between her female and male students in the classroom.

“You observe they are equally well,” Bai told The Hoya. “You really cannot tell, female or male, which one performs better. They are all active, energetic.”

Bai and Reena Aggarwal are the only two tenured female professors in the finance department.

As a former vice provost for faculty, Aggarwal was responsible for recruiting faculty that contributed to building an inclusive community.

“I think it’s changed a lot. But, we can’t stop here. We still have more work to do,” Aggarwal told The Hoya. “And at an academic institution like Georgetown, the women faculty are role models for female students. And it’s really important that they are in the classroom in front of students.”

Women struggle to make up half of the student body at most business schools across the United States. The proportion of female undergraduates at the MSB is approximately 37%, according to Patricia Grant, senior associate dean in the MSB undergraduate program. This falls behind undergraduate programs like the Wharton School of Business at the University of Pennsylvania, whose enrollment is 52% women, and the Haas School of Business at the University of California at Berkeley, whose student body is 54% women.

Grant explains that the lack of women in business classrooms and industries can cause prospective students to question their career trajectories.

“If you are someone who’s considering business, STEM, history, government, you name it, you typically want to see yourself represented in those fields,” Grant told The Hoya. “If you don’t see yourself represented at a level that you would want to see or you think would make you comfortable, that may be a deterrent to moving forward in that direction.”

Underrepresentation in the MSB doesn’t stop at students. Out of 36 faculty members in the finance department at the McDonough School of Business, only four are women. Coming out to 11%, this is the lowest ratio of female to male professors of all five departments in the MSB.

However, the number of full-time female faculty across the MSB has been growing steadily, from 28 in the 2016-17 academic year to 36 in the 2020-21 academic year. Notably, the faculty of the accounting and business law department is now more than 50% female.

The MSB makes an effort to combat issues that disproportionately impact female faculty, from extending tenure clocks due to a lack of available childcare during COVID lockdowns to the McDonough Dean’s Diversity, Equity, and Inclusion (DEI) research seminar series, Aggarwal said.

“For example, women faculty are not cited as often as male faculty,” Aggarwal said. “So we are taking it head on and trying to address these issues. These biases, the implicit biases that exist and that hurt women faculty, we really try to address those at the business school.”

“It’s just an opportunity to talk about anything that’s on their minds, and what are the challenges and how they can be addressed, and just get together socially,” Aggarwal said. “I think that really helps. Especially because we have a number of new and junior women faculty at McDonough. And with COVID, they were not able to meet and socialize. So now we really have to make extra effort to make them feel welcome to the McDonough community.”

Leia Qiu (MSB ’25) said that she has been able to seek guidance from a mentor through her BUILD experience and Zeeba, a student-run international equities fund on Georgetown’s campus of which she is a member.

“She helped me create my schedule for the first semester. She gave me advice on club apps, and it really made me feel more prepared for being a freshman at Georgetown,” Qiu told The Hoya.

Mentors can guide students to overcome gender-specific obstacles, sharing their own experiences, and help improve their confidence. According to a survey conducted by Together of over 50 North American companies, 41% of employees from diversity groups think it’s important that a mentor comes from the same group. With many senior leadership holders being men, young men have an easier time finding mentors than young women.

Mentorship and networking are especially important for women who want to break into predominantly male spaces. Like many of her peers, Gilles said she intends to go into a field where women are underrepresented, like venture capital.

“In venture capital, women are severely underrepresented, both on the investor side and the side receiving funds,” Gilles said. “A crazy crazy small number of funds go to female founders from VC firms.”

Earlier this year, she competed in the Venture Capital Investment Competition on Team Elm, Georgetown’s first all-women investment team, forming a bond with the other women on the team, including Erin Connery (MSB ’24).

Connery, a finance and accounting double major, said that opportunities like Team Elm have provided her with impactful informal mentors.

“I was the only sophomore on the team,” Connery told The Hoya. “There were two juniors and two seniors, and I felt like I just got a lot of mentors from it and mentorship opportunities. I had one girl help me out with housing and picking where I wanted to live next year.”

Women in the MSB also look to their professors for support and guidance. Aggarwal, who also serves as director of the Psaros Center for Financial Markets and Policy, a research and policy center within the MSB, said she observed that far more female students come to her office hours than male students.

“Many of the undergraduate women students would come to me to get career advice, and I think they felt really comfortable coming to me because I could relate to what they were thinking,” Aggarwal said. “They were not hesitant to ask me the questions that they wanted to ask, which they might not have asked some of my other colleagues.”

Aggarwal has also noticed the reluctance of some female students to speak up in class. In order to help those students out of their shells, she finds that female faculty take a different approach than their male colleagues.

“I have it at the back of my mind: I know they don’t want to speak up,” Aggarwal said. “So I will gently bring them out, and once they get used to it, then they’re fine. But I think women faculty will just approach it slightly differently.”

Throughout March, which is Women’s History Month, Aggarwal held networking events to help build up the confidence of women in the MSB.

“We teamed up one MBA student and one undergrad, and they interviewed a very senior woman leader,” Aggarwal said. “From everything, you know, where did you start? How did your career move? And what advice do you have for us? And it just sort of gave them real confidence to have these interviews and talk and have the network.”

Diverse professors in the business school can foster equity, empowering female students to pursue their passions and break into new fields, Aggarwal said.

“I find women of color are even more somehow wanting to reach out and talk to me,”Aggarwal said. “They learn how to manage time, how to work with people. And all of that becomes really important when you go out to the job market.”

“We’re proud to have a school where our faculty and our leadership within the school are really committed to see more women represented in our classroom, in our halls in school, and to ultimately go on and become women leading in business all over the world,” Grant said.