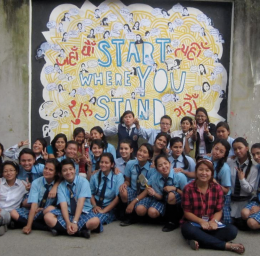 Sometimes, a jolt of caffeine is all it takes to spark a great idea.

At least that was true for Claire Naylor (SFS ’11) and Claire Charamnac (SFS ’11), who conceived their leadership development organization Women LEAD while studying for midterms over coffee from Uncommon Grounds during their junior year.

“We knew that there were other young women around the globe who had passions and visions but simply were not being listened to,” Charamnac said. “We wanted to create an organization that would give them the tools to succeed.”

The decision to establish a nonprofit in Kathmandu was inspired by Naylor’s upbringing in a rural Nepalese village. As a schoolgirl, Naylor had witnessed firsthand the overwhelming gender inequality in this impoverished country, where 60 percent of women are illiterate and a third of girls aged 15 to 19 are already married.

A self-described “passionate feminist,” Charamnac shared many of Naylor’s opinions and was inspired to act upon them after hearing stories about her friend’s childhood experience.

Together, Naylor and Charamnac decided to create an organization dedicated to fostering the development of young women leaders in Naylor’s hometown of Kathmandu, where there had never before been a program like the one they had in mind.

In their junior year, Naylor and Charamnac applied for a grant from Davis Projects for Peace, which awards $10,000 to students who design sustainable grassroots projects that promote peace in various communities. Unfortunately for the two Georgetown juniors, political turmoil and instability throughout Nepal rendered their target area unsafe and prevented them from receiving the grant in 2010.

Undeterred, the entrepreneurial pair applied for a $1,000 grant later in their junior year that enabled them to travel to Nepal over the summer of 2010 to run a short pilot project that would ultimately serve as the core of their organization. During this two-week leadership course, Naylor and Charamnac sought to foster the confidence and motivation of 28 young women living in or near Kathmandu.

“Watching these girls discover their voices and their own abilities to lead their peers inspires us and makes us feel like we really are making a difference,” Charamnac explained.

After witnessing the transformative effects that their pilot program had upon the girls, Naylor and Charamnac reapplied for the Projects for Peace grant after returning to the United States. This time, the duo won the $10,000 grant, which they used to officially found Women LEAD after graduating in May 2011.

Although the two-week intensive leadership development course for young women that debuted the summer of their junior year remains at the core of Women LEAD, the organization has expanded greatly since its founding in 2011. Naylor and Charamnac, along with their on-site program manager Sonu Shakya, have since trained over 150 young girls, making a tremendous impact on the local community. Graduates of Women LEAD’s school leadership program have gone on to teach their peers — both girls and boys — at local schools about the leadership skills they learned and the confidence they gained through the course.

“We operate with a pay-it-forward mentality,” Charamnac said. “We hope that the young women will use the skills that we have equipped them with to improve their communities.”

Although the organization has helped over 150 young Nepalese women since May 2011, fundraising is still proving to be a challenge for Naylor and Charamnac because both founders are relatively young.

“Being bold and taking risks in the business world is strongly encouraged,” Charamnac said. “But being seen as risky in the nonprofit world isn’t always so favorable.”

Women LEAD also struggles to convince parents in Nepalese communities that their daughters’ educations are equally as important as their sons’. The organization must keep fees for parents as low as possible because many families believe that leadership training for their daughters has little value.

But Charmnac expressed confidence in her organization’s future growth.

“[Naylor] and I have very big dreams for Women LEAD,” she said.

In the next few years, the two co-founders want to make Women LEAD sustainable and reputable both at home in the U.S. and in Kathmandu. But in terms of their goals for the long run, Charamnac and Naylor hope to set up Women LEAD programs in various countries around the globe.

“Nepal isn’t the only country that suffers from gender discrimination,” Charamnac explained. “The context changes in each country, but the fact remains that leadership development for young women is needed everywhere.”