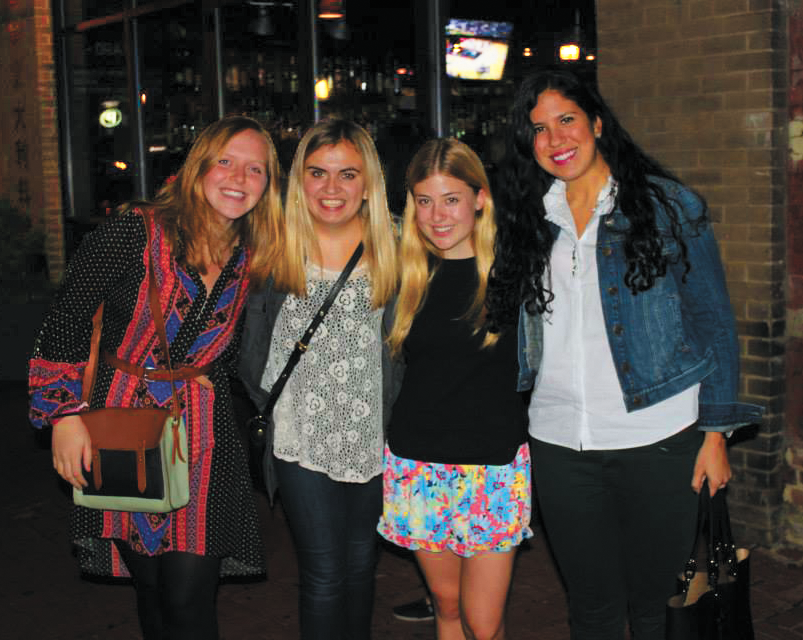 Despite only being recognized by the Student Activities Commission this semester, Georgetown Women in Leadership, a group whose motive is to advance undergraduate women personally and professionally, is powering full steam ahead and proving just what women can achieve. Its upcoming Own It Summit on April 12 features speakers ranging from the vice president of Google[x] to a Pulitzer prize-winning journalist to an astronaut, and it promises to be an impressive and inspiring event.

Describing the speakers that summit co-chairs Helen Brosnan (SFS ’16) and Kendall Ciesemier (COL ’15) have managed to bring together for this event as impressive is an understatement. Brosnan and Ciesemier admit they’re both still in shock themselves.

“We started with people we knew and went from there. We’ve been really surprised by finding out how many of these people know each other and how excited they are to bring together their friends,” Ciesemier said.

The enthusiasm with which the speakers have responded to the event reflects exactly the sort of attitude that the summit seeks to promote.  Ambassador Melanne Verveer responded to the organizer’s email within one minute, and other women not only promised to be there, but to bring along some prominent friends as well. As a result, the summit will feature the likes of Richelle Parham, chief marking officer for eBay; Norah O’Donnell, co-host of “CBS This Morning”; and Judy Smith, who inspired the “Scandal” character Olivia Pope.

Even more surprising is the fact that more than half of these prestigious women are Georgetown alumnae, or at least connected to Georgetown in some way. Brosnan pointed out the disparate contrast between the recognition of male alumni who work in politics and the many female alumnae who have gone on to do amazing things.

Brosnan and Ciesemier both noted the importance of getting women from a wide range of industries to be involved in the summit.

“The top engineer from Google is coming, and there’s no reason for her to come at all,” Brosnan said. “No one here is an engineer — we don’t have an engineering school — but she has such an interesting career life story that someone can sit in the audience and listen and get inspired.”

While the summit is focused on empowering women, instead of acting as a forum for discussing women’s issues such as concerns over body image or facing sexism in the workplace, it will emphasize showing female students how they can better improve their leadership skills.

“People have a serious misconception that GUWIL is this uber-feminist group where we only talk about women’s issues, or on the other side, just see us as being super professional and [businesslike] when that’s not the case at all. It’s really about leadership,” Brosnan said.

She highlighted that the mission behind the summit is to acknowledge that while women may face these barriers and hardships in their careers, they can look past them and see how they can work to the best of their ability despite these challenges.

“With the summit, we’re saying: Let’s assume that all the women in this room are going to be CEOs — how can they be the best CEOs they can possibly be?” Ciesemier added, “This is definitely not a whining conference.”

As part of the summit’s mission to foster leadership skills among female Hoyas, the day will feature opportunities to connect with the speakers in a variety of formats during breakout sessions. Part of GUWIL’s  goal is to make the summit interactive, as well as to combat the issue of “the boy’s club” with a stronger, more welcoming women’s alternative. With a choice of office hours, workshops and more general breakout sessions, attendees will have the opportunity to get valuable advice and learn how to connect with professional women who can inspire and support.

The structure of the summit therefore directly addresses issues that the GUWIL leaders and the professionals they contacted have recognized as key problems for women climbing the career ladder. Surprisingly, a lot of them are about problems between women in the workplace. One of them is the issue of mentorship.

“It’s so hard, but so important, to have a woman in power who you can relate to and have access to, and with whom you can build a relationship that’s not looked at as inappropriate, as with older men and younger women hanging out. That mentorship component is a real challenge,” Ciesemier said.

The creation of this event is hugely important for both GUWIL and the university in general. Many students and faculty members were surprised to discover that such an event didn’t already exist. On a campus that encourages its students to be leaders, the summit will place significant emphasis on strengthening women’s ambitions to assuming powerful roles.

“GUWIL has large ambitions to ensure women make it to senior positions, and so much of that starts with providing the supportive ecosystem in the undergraduate years — and even earlier, if possible,” said co-President Ava Arrayo (SFS ’16).

Rather than dwell on the problems that can hold women back from their career aspirations, the summet will inspire the brilliant women who make up Georgetown’s community to take the initiative to become the next generation of female leaders.

Tickets for the summit are available for purchase starting Feb. 28.