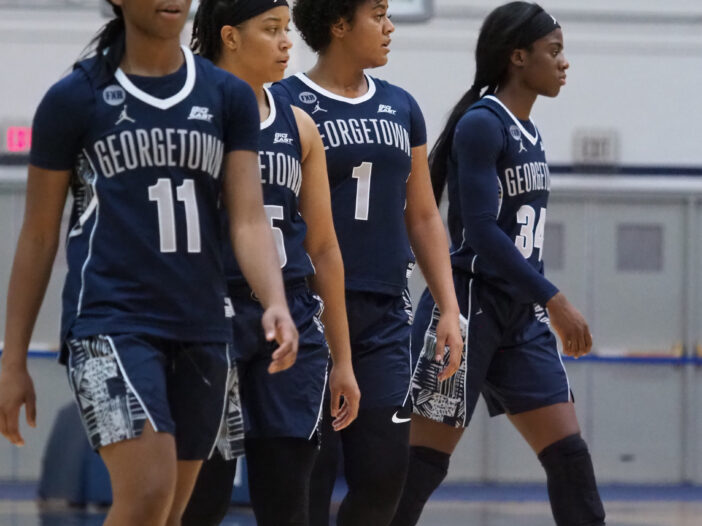 The Georgetown women’s basketball team hopes a return to post-pandemic normalcy will bring a return to winning for the program, which has struggled in recent seasons.

Last season, the Hoyas finished 2-15 overall, enough to land them last place in the Big East for the first time since the 2014-15 season. Now, the team looks to use last season’s frustrations as a motivator. According to Head Coach James Howard, the team has its eyes set on one goal: winning early.

“The first and only goal is to get winning back in the taste of our mouths,” Howard said in a Zoom interview with The Hoya. “When we kick off, we really need to play like a championship game. Everything this year is about just trying to get more wins so that our confidence will continue to rise.”

The Hoyas’ defensive prowess has been their most valuable asset in recent seasons. To win games, though, Georgetown must also prioritize improving offensive efficiency.

“We have to score more than 49 points,” Howard said, referring to the team’s dismal season average in points per game last year. “In order for us to take that next step and turn our success back into winning ways, we have to finish. We have to knock down shots.”

That growth should be easier for the Hoyas this season than in years past. Unlike last season, Georgetown has had little roster turnover heading into its 2021-22 matchups. The team is missing just one regular starter from last year in 6-foot-2-inch forward Taylor Baur (GRD ’21), a graduate student from Princeton who started nine games for the Hoyas, totaling 110 rebounds and 58 points.

The team’s returners, led by graduate forward Anita Kelava, offer lots of hope for a revamped post presence. Kelava, a 2019-20 team captain who missed last season because of visa issues during the COVID-19 pandemic, started 25 games and topped the team in minutes played the year prior. She also led Georgetown with 223 rebounds and 53 blocks, adding 197 points and 22 steals.

Howard recognized the importance of Kelava, who also plays for the Croatian national team, for Georgetown this season.

“Having Anita back just brings back experience,” Howard said. “That word experience is probably the biggest thing when you play in the Big East. Before she left, I thought she was playing her best ball.”

The increased team chemistry that Kevala’s return will bring should help the Hoyas find success in scoring. The return to normal practices with an experienced roster will be a crucial factor in improving consistency, especially offensively.

Thanks to returning talent, Georgetown had limited space for new players this season. That said, the Hoyas’ new additions could make important contributions. Graduate guard Mary Clougherty is a new name to watch, especially following her final season at Lehigh, where she totaled 191 points and 41 assists in nine starts as a team captain.

Clougherty’s performance will be a key factor for the team’s success this season, according to Howard.

“She’s a kid that could stretch the floor for us,” Howard said. “She is a really good shooter out there and has a high basketball IQ.”

Georgetown has five other new additions to the team. Along with graduate transfer Kaylin West from Coastal Carolina, the Hoyas list four first-years on their roster: center Ariel Jenkins, forward Brianna Scott, forward Kaliyah Myricks and guard Natalie Jasper. Jenkins, a 6-foot-3-inch rebounding force, headlines the group, though Howard spoke highly of all the new players.

“We’re very, very pleased with our young players right now,” Howard said. “I would be really surprised if they didn’t do some special things here at Georgetown.”

In addition to their work on the court, though, Georgetown players remain committed to advocacy off the court. Last season, the team made headlines for its collaboration with Marquette’s women’s basketball team in a discussion centered around social justice and unity in communities across America. This season, the Hoyas will continue to encourage their players to combat these ongoing issues, as Howard explained.

“When it comes down to fighting for social justice and building their platform, we’re going to give them all the support we can,” Howard said. “There’s a lot of little things that we have set up each year to let their name and likeness and everything else be supported.”

Georgetown (1-0) started its season on a high note with a 73-62 victory over Navy (0-1) in its first matchup of the season Tuesday, Nov. 9. Georgetown will face off against Salem University at home Friday, Nov. 12.