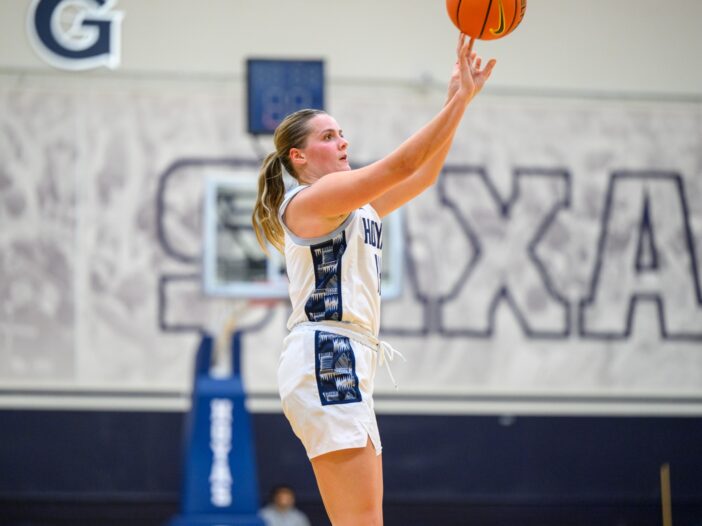 After opening up the season with a strong win against Salem University (1-2), the Georgetown women’s basketball team (2-1) fell 61-78 to the Temple University Owls (1-1) on Saturday.

Temple and Georgetown have met seven times previously, with Georgetown holding a 3-4 record before Saturday’s game. Last season, the Owls defeated the Hoyas with a 49-47 win. With Temple’s win this weekend, the Owls have won their last three games against Georgetown.

The first quarter started with a quick 4 points from Temple, but the Hoyas responded with a 7-0 run, which first-year guard Kennedy Fauntleroy initiated and finished. Despite an injury to Temple guard Jasha Clinton and foul trouble for forward Ines Piper, Georgetown was still unable to maintain its 7-4 lead as Temple closed out the quarter with a score of 19-16.

Senior forward Jada Claude opened the second quarter with a 3-pointer to tie the game 19-19, but those were the only points Georgetown scored in the opening minutes. Temple responded with a 7-0 run to take a 26-19 lead, forcing the Hoyas to call for a timeout to regroup. With Georgetown down 33-26 in the final minute of the half, Claude scored 3 quick points to close the gap to 33-29. Claude also led the Hoyas with a double-double on 15 points and 15 rebounds.

“Jada Claude showed us some good things with her effort tonight,” Howard said in the GU Hoyas press release. “Kennedy Fauntleroy was good but we need more from everyone else around them.”

Temple kept its momentum going in the third quarter, with quick offensive plays from guards Aleah Nelson and Clinton. Though graduate guard Kristina Moore sunk a triple to cut the deficit to one in the first minute of the half, a 4-point play from Nelson gave Temple a 37-32 lead that continued throughout the quarter. Nelson went on to lead Temple on a 7-0 run, which eventually extended to a 15-2 run due to Temple’s aggressive offense and consistent rebounds.

After the game, Howard said the team had too many lapses in the second half.

“We didn’t come out aggressive enough, and we didn’t handle their speed,” Howard told Georgetown Athletics. “In the third quarter, we cut it to one and then had some defensive lapses and the same thing happened at the end of the game when we were coming back. As big as we are, we left too much around the rim and we left too many free throws on the floor.”

After Temple finished the third quarter 57-40, they opened the fourth quarter with a 63-49 lead. Georgetown, though, was able to draw a few fouls to chip away at the lead along with a bucket from Claude. In the final eight minutes, the Owls scored 18 points and the Hoyas were unable to find a comeback, losing 61-78.

Both teams scored 21 points in the last quarter, but due to mistakes on defense and the Owls’ dominating presence on the court, the Hoyas were unable to convert their early lead into a victory.

Fauntleroy, Moore, and senior forward Graceann Bennett all scored in the double figures with 13, 10 and 10 points, respectively. Fauntleroy has been a bright spot as a newcomer to the squad; this was her second game scoring in double figures.

After a dominant season opener against Salem that saw her score 16 points and grab 10 rebounds, junior guard Kelsey Ransom struggled in the season’s second contest. She shot just 1-9 from the field, logged a single assist, and committed 2 turnovers. Ransom is the engine of the team’s offense. While she seems capable of living up to the challenge, when she struggles, the offense struggles.

Georgetown has already bounced back in its next game against Coppin State this Wednesday, Nov. 16, winning 50-35. On Friday, Nov. 18 at 7 p.m., the Hoyas will take on Cal State Fullerton in McDonough Arena.