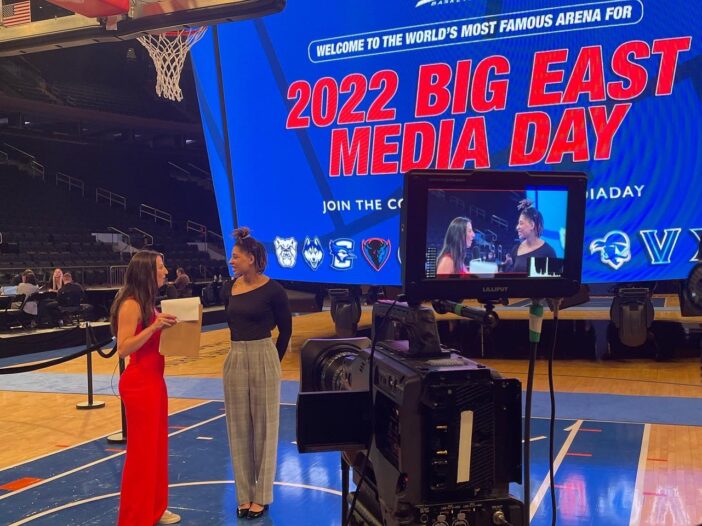 Big East Commissioner Val Ackerman began the proceedings by applauding last year’s accomplishments by the University of Connecticut, Creighton University, DePaul University and Villanova University, who each advanced to the 2022 NCAA tournament. In the 2021-22 season, led by Hall of Fame head coach Geno Auriemma, UConn won its second conference championship since returning to the the Big East in 2020-21, earning its 21st regular season crown and 20th Big East tournament title after defeating Villanova in the championship game.

The Huskies followed this championship with a deep run in the 2022 NCAA tournament, advancing to their 14th consecutive Final Four and 12th national title game, but ultimately fell short to South Carolina. Creighton, DePaul and Villanova also represented the Big East in the NCAA tournament. The three schools all won their first-round games with Creighton making a historic run to the Elite Eight under the guidance of head coach Jim Flanery.

Following the 50th anniversary of Title IX in June, Ackerman also said in her remarks that they need to use the momentum to continue pushing for gender equity within college basketball.

“We work very hard to see so much attention directed to the progress women’s basketball and women’s sports have made over the past five decades and what we all need to do to keep those arrows moving upward,” Ackerman said.

Last summer, New York City law firm Kaplan Hecker & Fink LLP investigated the disparities between women’s and men’s basketball teams in the NCAA, prompted by players’ outrage regarding facilities at each of the respective March Madness tournaments. Upon concluding their investigation, the firm offered its recommendations to the NCAA on how to best ensure gender equity.

This year, Ackerman mentioned that there has been movement to enact some of the recommendations, including recent decisions by the NCAA to add an NCAA-sponsored Women’s National Invitation Tournament to the national postseason as well as adding a girls’ basketball academy next year to accompany the boys’ basketball academy as part of the NCAA summer calendar.

Ransom said the team needs to approach the game in a more detailed manner to win.

“We want to win, so we need to understand what that takes in a very detailed manner,” Ransom said during media day. “How do we win each possession? How do you win every minute that you get on the floor? Because if you don’t, the opponent will, and whoever wins more of those moments is going to win the game. I think breaking it down like that — learning and building up — is how little things matter, which is something that we’re really focusing on to help us.”

Scott said she hopes the addition of Claude and Moore will provide experience to the Hoyas roster and translate into more wins.

“We are a young team, and we were a young team last year,” Scott said during media day. “But bringing back the experience, especially with the two transfers, Jada Claude and Kristina Moore, we bring in some veteran presence, so our leadership has definitely improved because of that. Our captains, senior forward Graceann Bennett and Kelsey Ransom, have also been very great leaders for us so just carrying that experience is something that’s gonna help us.”

Georgetown will open its season against Salem University Nov. 7 at McDonough Arena. The game tips off at 7 p.m. and will be streamed live on FloSports.