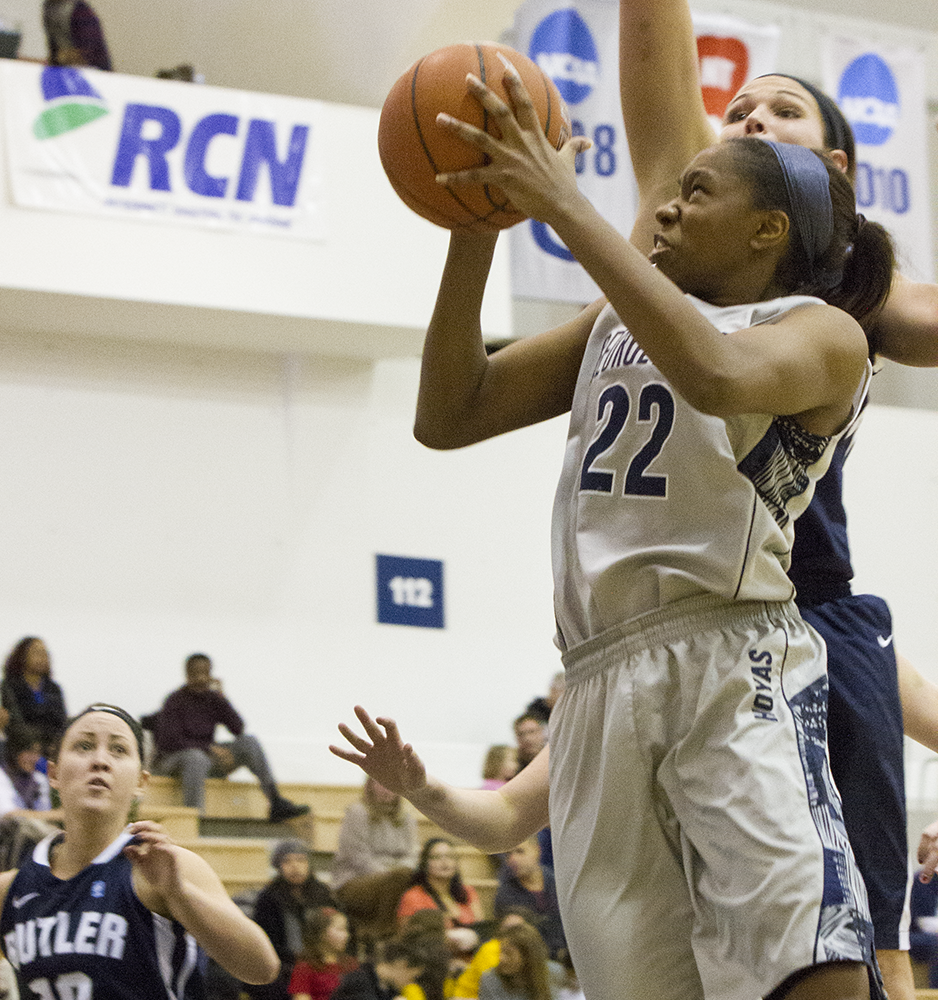 In the first season of the new-look Big East, DePaul and St.  John’s led the conference, and later each earned wins in the NCAA tournament. This year, several teams around the league  return significant talent, and many teams, including Big East Preseason Coaches Poll frontrunners DePaul, St. John’s and Villanova, will have legitimate postseason aspirations. The Hoyas’ chances, meanwhile, are slim.

DePaul returns a lot of its firepower from a wildly successful 2013-2014 season. The Blue Demons, who received a No. 7 seed in the tournament, defeated Oklahoma before upsetting No. 2 seed Duke to earn an appearance into the Sweet Sixteen, where they fell to Texas A&M. They return five of their six leading scorers from last year, highlighted by senior guards Brittany Hrynko and Megan Rogowski, both preseason all-Big East honorees. Hrynko led the Big East in assists last season while Rogowski scored 15.7 points per game and made an incredible 45 percent of her three-point attempts. DePaul is led by last season’s Big East Coach of the Year Doug Bruno, and is projected to win the league again this year, according to the Big East Preseason Poll.

Led by then-sophomore guard Aliyyah Handford, St. John’s earned a No. 8 seed in last year’s NCAA tournament, where it defeated USC before losing to No. 1 seed Tennessee. Handford, now a junior and a preseason all-league selection, is the undisputed leader of the Red Storm, as she returns from a season in which she scored 16.7 points per game, fifth-best in the Big East. St. John’s also returns key players in junior guard Danaejah Grant and senior forward Amber Thompson, who each received preseason all-Big East recognition. Head Coach Joe Tartamella has led his team to consecutive NCAA tournament appearances in his first two years, and he will look to continue that trend this season.

Coming off of a decent season that resulted in an appearance in the women’s NIT, Villanova will look to return to the NCAA tournament this year. While last year’s leading scorer, guard Devon Kane, graduated, the Wildcats return the rest of their rotation from last season, including junior guard and preseason all-conference selection Caroline Coyer and her twin sister Katherine. Head Coach Harry Perretta returns for his 36th season at the helm, and looks to increase his total of 638 career wins. Perretta’s methodical offense allowed Villanova to lead the nation in fewest turnovers per game last season with just 8.8 per game, and the Wildcats will focus on continuing to take care of the ball en route to a successful season.

Creighton will be led by junior guard Marissa Janning, this year’s Preseason Big East Player of the Year and last season’s Big East scoring leader at 17.6 points per game. The Bluejays graduated three starters from last season’s 20-win team, necessitating some changes from Head Coach Jim Flanery.  Still, this year’s team should still be a significant threat in the Big East, as senior forward Alexis Akin-Otiko and sophomore forward Brianna Rollerson should be ready to take on larger roles, and Creighton looks to replace its departed talent and compete for a top conference spot.

Head Coach Anthony Bozzella enjoyed one of the most successful campaigns in school history in his first season, as the Pirates reached the 20-win plateau for the first time in 19 years. Seton Hall looks primed to enjoy even further improvement in Bozzella’s second season, as it will return two of the Big East’s top four scorers from last year in junior forward Tabitha Richardson-Smith and graduate student guard Ka-Deidre Simmons, both of whom were named preseason all-Big East selections. In addition, the team adds three freshmen and a junior college transfer, as well as three other transfers that will be eligible in the 2015-16 season. It appears that this program’s fortunes are looking up.

Third-year Head Coach Susan Robinson Fruchtl will look to lead Providence out of the cellar of the Big East. The Friars are led by senior guard Tori Rule, who ranked sixth in the Big East with 16.1 points per game, and senior forward Alexis Harris, a preseason all-league selection who ranked sixth in the conference with 8.9 rebounds per game to go with her 14.0 points per game. With these two standouts returning alongside the rest of the team’s six leading scorers from last season, it seems likely that the Friars will improve upon their paltry total of two Big East wins from last season, even if they are not yet ready to challenge for the conference title.

Unfortunately for the Golden Eagles, star forward Katherine Plouffe, who ranked second in the Big East in scoring and third in rebounding in her senior season, graduated alongside two other starters from last year’s team. First-year Head Coach Carolyn Kieger, a former standout player at Marquette, will look to senior guard Arlesia Morse, a preseason all-conference selection, and senior forward Apiew Ojulu to fill the voids left by the departed players. Marquette will attempt to reach the NCAA tournament for the first time since 2011, though this year that will be a tall task.

Head Coach Brian Neal’s team struggled in his first year at the helm, and its two leading scorers from last year, guards Shatyra Hawkes and Ashley Wanninger, both graduated. However, there are some reasons for optimism in Cincinnati. Xavier returns a number of key rotation players from last season, led by junior guard Jenna Crittendon, who was the team’s leading rebounder and second leading scorer. In addition, the team adds two transfers and five freshmen. Still, it seems that the Musketeers are a few years away from being a true contender in the Big East.

Following the 2013-14 season, there was a mass exodus from the Butler program. Star forward Daress McClung graduated and Head Coach Beth Couture was fired. The damage did not end there, as four players, including three of the team’s regular starters, transferred. Included in that group was center Liz Stratman, who led the Big East in blocked shots with 2.7 per game last season en route to being named the conference’s Defensive Player of the Year. First-year Head Coach Kurt Godlevske will have the difficult task of rebuilding this program, but it is hard to envision the Bulldogs making a mark in the conference this year.