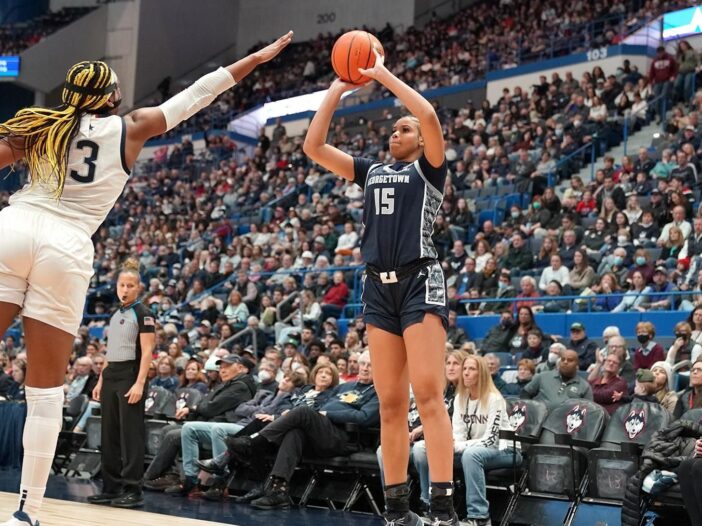 Georgetown University women’s basketball mounted an impressive effort against the No. 5-ranked University of Connecticut Huskies, ultimately losing 50-65 against the powerhouse program.

Playing in front of a large crowd of Husky fans in Hartford, Conn., the Hoyas (9-9, 2-7 Big East) came out of the gates aggressive, not shying away from physical contact with the Huskies (16-2, 9-0 Big East). This energy allowed them to shock their typically dominant opponents, keeping them in close range throughout the Jan. 15 game.

On the offensive end of the court, Georgetown outscored UConn 13-11 in the first quarter, led by a combined three sharp shots from beyond the arc from graduate student guard Kristina Moore and sophomore forward Brianna Scott.

Defensively, Georgetown’s hustle and physicality threw the Husky offense out of its orbit, forcing the team to give up seven turnovers in just 10 minutes. Despite the Huskies’ leading scorer Azzi Fudd coming off the bench halfway through the quarter in her second game back following an injury, the Hoyas remained unfazed, holding UConn to its lowest scoring quarter of the season.

In the second quarter, both teams continued to tug the lead back and forth, with the Huskies starting strong on a 6-0 run to go up 13-17. However, Georgetown continued to lay on its all-out defensive pressure, forcing another six turnovers and allowing the Hoyas to keep it a one-point game at halftime, trailing 23-24.

UConn dominated the third quarter, making it increasingly difficult for the Hoyas to remain a competitive force. In the first two minutes, UConn quickly took control, taking the lead 31-23 and not relinquishing it from then on.

The Hoyas found themselves in deep trouble trying to stop UConn’s aggressive drives, with three of the team’s starters — Moore, junior guard Kelsey Ransom and senior forward Graceann Bennett — earning their third fouls each just three minutes into the second half. As the fouls piled on, the Huskies capitalized on their free throw opportunities, going 13-for-14 on the line and outscoring the Hoyas 20-8 in the third quarter.

Although the Hoyas tried to scrape their way back from a 13-point deficit in the final quarter, the last minutes of the game saw much of the same Husky domination. Back-to-back baskets from Bennett and two successful free throws from junior transfer forward Jada Claude helped Georgetown cut the lead to 12 points at 41-53 with 5:27 left in the game, but UConn pulled away to win 50-65.

Despite the loss, the Hoyas held their own against the Big East undefeated, No. 5-ranked Huskies with their competitive first half play and physical tenacity throughout the game. Out of UConn’s nine consecutive runaway wins this season against Big East competition, Georgetown kept the Huskies to the second lowest score differential the team has seen, behind only the Marquette Golden Eagles who fell by 13 points Dec. 31. The Huskies have cruised to all of their other conference wins by at least 25 points.

For the Hoyas, the scoreline was a significant improvement upon their last meeting with the Huskies. UConn downed Georgetown 84-38 to eliminate the Hoyas from the 2022 Big East Tournament.

Standout first-year guard Kennedy Fauntleroy continued to be an all-around essential player for Georgetown, scoring nine points and chalking up three assists and three steals. In addition, Scott contributed an impressive performance, with 11 points and seven rebounds. Although Ransom, the Hoyas’ leading scorer, only posted three points, her defensive energy with five steals spread to the rest of the team. Overall, Georgetown forced UConn to concede 23 turnovers on 11 steals.