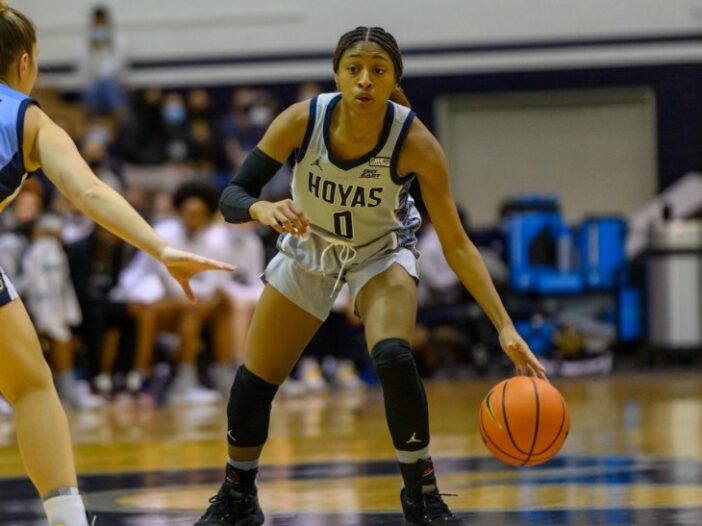 The Georgetown women’s basketball team finally ended their eight-game losing streak with a win over the Xavier Musketeers. Tensions were high heading into this game as both teams were jockeying for higher seeding in the Big East Tournament, which takes place from March 4th to March 7th. The Hoyas (9-18, 4-15 Big East), tenth in the Big East standings, were just behind the Musketeers (9-20, 4-16 Big East), who sat at ninth.

Both teams opened the game with lockdown defense. Georgetown moved the ball around but could not find many high-quality shots. Defensively, however, the Hoyas found rhythm by stealing the ball several times. Led by sophomore guard Kelsey Ransom, Georgetown put pressure on the Musketeers to turn the ball over.

Georgetown struggled to capitalize on open looks, shooting 3 for 12 from the field and 0 for 4 on three-pointers within the first 5 minutes of the game. But eventually, the Hoyas found a cohesive rhythm. Working through the squad’s motion offense, graduate guard Milan Bolden-Morris popped out of the play for a pass and swished a three-pointer with 2 minutes left in the first quarter, ending the quarter 13-12 for Georgetown.

Coming into the second period, senior forward and center Shanniah Wright drove quickly to the basket to score, putting up Georgetown’s first points of the second quarter. Turnovers then became rampant in the quarter as neither team could maintain control of the ball.

After recollecting from disorientation caused by the turnovers, graduate guard Kaylin West gained possession off of a steal by graduate guard Mary Clougherty and pushed down the court. Musketeer defenders swarmed her in the middle of the court, but she was able to find an open Bolden-Morris who drained a 3-pointer from the left side of the key. Heading into half-time, the Hoyas were up by a slim margin, 23-21.

The third quarter began with a lethargic start with another defensive stalemate. Finally, three minutes into the quarter, the Hoyas were able to add points to the scoreboard. Clougherty used acute passing vision to find open teammates through the pressing Xavier defense. Senior forward Jillian Archer also excelled, consistently cutting openings in the defense where guards were able to dish her the ball.

Xavier, on the other hand, only found little offensive success in the third quarter. The majority of its meager 8 points were scored through drawing fouls and the resulting free throws. The third quarter ended with the Hoyas holding a double digit lead at 39-29.

Cumulatively, Georgetown forced Xavier into 16 turnovers while simultaneously out-rebounding the Musketeers 51-41. Shooting-wise, the Hoyas sank 30.8% of their efforts and held the Musketeers to just 25.5%.