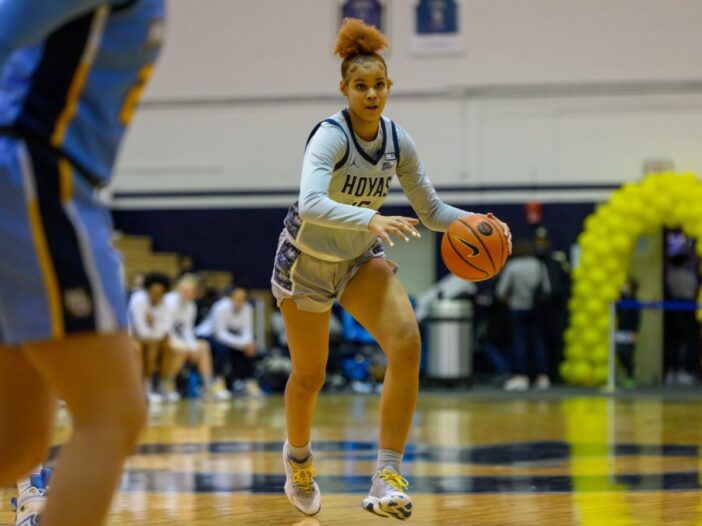 The Georgetown women’s basketball team closed out its regular season with a triumphant 69-48 victory over the Butler Bulldogs this Sunday in Indianapolis.

This win brings the Hoyas (9-18, 4-15 Big East) to 2-0 against Butler (1-26, 0-18 Big East) in the season series. The win also hopefully signals a turn in the right direction for the team, following a victory in their previous game against Xavier which snapped an eight-game losing streak for Georgetown.

The Hoyas were in control from buzzer to buzzer. Apart from two short Butler leads at 2-0 and 3-2, Georgetown led all the way. However, Georgetown had a slow start, not getting on the scoreboard until the 6:39 mark of the first quarter.

Strong defense and poor shooting from Butler helped offset the slow start, with the Bulldogs shooting 16.67% on field goals for the quarter. By the start of the second, the Hoyas had opened up a 10-point gap.

Butler stuck around in the second quarter, shooting 77.78% from the field. Despite the hot shooting, Georgetown capitalized on sloppy play, collecting eight Butler turnovers in the quarter.

Sophomore guard Kelsey Ransom netted seven of her game high 15 points in the second frame, including a jumper to beat the halftime buzzer. A solid second quarter across the board left the Hoyas maintaining the 10 point gap into the half.

The Hoyas began pulling away in the third, finishing the quarter up 22 points. The strong performance continued with 13 points off turnovers in the quarter.

Georgetown was firing on all cylinders, netting game highs in second-chance points, bench points and points off turnovers. The Hoyas held Butler scoreless until the 5:29 mark of the quarter, further complementing their already strong offensive play.

By the beginning of the fourth quarter, Georgetown had a comfortable 56-34 lead. Butler managed to outscore the Hoyas in the quarter 14-13, but despite their efforts, there was little chance for a comeback. Georgetown secured a game high lead of 25 points near the start of the quarter. The Hoyas ended the game with a 21-point victory.

Offensively, Georgetown’s struggles from behind the arc continued, as the team shot just 25%. With a season average of 29.1% from downtown, the Hoyas have potential for their offense to improve for the last few games of the season.

In the paint however, the Hoyas dominated, outscoring Butler 36-18. The bench also played its role, scoring 23 points in the contest.

Georgetown did a great job limiting turnovers, committing only 10 –– eight below their season average. On Butler’s end, 24 turnovers gave the Hoyas 27 points.

Georgetown was favored throughout the contest, according to ESPN, hopefully providing some momentum for a potential Cinderella run through the Big East tournament starting March 4.

The Hoyas wrapped up the regular season 4-15, seeing little improvement from their 2-14  regular season record from last season. Georgetown played to expectations this season, finishing exactly where they were predicted to in the Big East’s Coach’s preseason poll.

With a relatively young roster, the Hoyas can expect continued growth in future seasons as most of the rotation is set to return.

The Hoyas will look for an upset win when they take on the Providence Friars (11-18, 6-14 Big East) in the first round of the Big East tournament March 4.