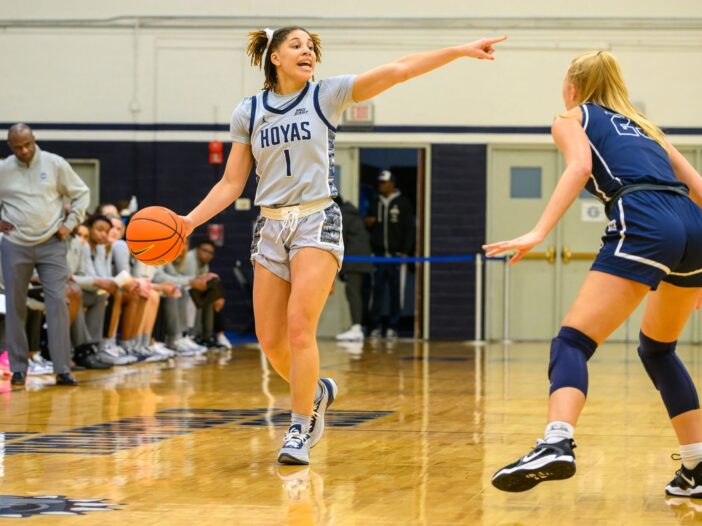 The Butler Bulldogs’ game plan was apparent from the get-go.

The Georgetown women’s basketball team (9-9, 2-7 Big East) was losing momentum on defense, exhausted from constantly covering passing lanes and preventing dangerous penetrations to the paint. Conversely, the Butler Bulldogs (7-12, 2-8 Big East) stuck to strong off-ball play to generate chances from outside the arc and defeat Georgetown 72-48.

From there, it was like clockwork: pass, catch, shoot, score, rinse, repeat and win.

The Hoyas and the Bulldogs entered the Jan. 11 game hoping to break their respective three-game losing streaks. The Hoyas, who saw their relatively poor run on shooting improve in their previous game against Villanova, wanted to build upon their progress against a sharpshooting team in the game against Butler.

After winning the tipoff, Georgetown looked more comfortable than the Bulldogs on both sides. A combination of strong passing play to generate scoring opportunities and constant pressure on the ball allowed the Hoyas to build a comfortable 13-5 lead with 4:23 remaining in the first quarter, capped off by a steal and fastbreak layup by junior guard Kelsey Ransom.

The Bulldogs managed to claw their way back to a three-point deficit by the end of the first quarter despite both sides collectively missing the final eight shots of the period. Georgetown was still maintaining decent pressure while also drawing fouls to halt Butler’s attacks, although Butler began to find cracks in the defense to rack up a few points.

As the second quarter opened, the Bulldogs slightly altered their approach, taking more 3-pointers, exploiting the Hoyas’ focus on the perimeter. As Georgetown struggled to adjust on the fly, Butler took the lead and steadily pulled ahead to 22-19 with 5:15 left in the second quarter. The Hoyas failed to mount a response, playing sloppily and conceding eight turnovers on a series of errant passes and lapses in concentration.

A necessary timeout gave Georgetown an opportunity to stop the bleeding, but their continual poor shooting widened the gap to 34-23 by halftime. The Hoyas, making only 4-of-11 field goal attempts this quarter, attempted zero 3-pointers, whereas the Bulldogs went 8-of-17 with four buckets coming from beyond the arc. Butler guard Kendall Wingler emerged as a dual threat, scoring 10 points and making two steals in the second quarter alone.

Looking for an answer to the Bulldogs’ shooting, the Hoyas began to press more aggressively for turnovers high up on the court while switching to a zone defense in their own half. These adjustments were somewhat effective at limiting further scoring, yet Georgetown’s offense remained too one-dimensional to take full advantage of the opportunity.

A few highlight reel-worthy plays from Ransom injected some life back into the home crowd, but otherwise, the Hoyas went a woeful 3-of-17 in the third quarter. As the game entered the final period, Georgetown was down 48-32 and had to play aggressively in hopes of massively outscoring their opponents and retaking its early lead.

The Hoyas closed the game strong by posting their highest field goal percentage in a single period, making 7-of-13 shots at a 53.9% clip for their highest-scoring quarter. However, the assertive approach meant that the Bulldogs had more chances to exploit double teams and continued to rain down 3-pointers. The fast-paced play on both sides did little to change the unceremonious final score of 72-48, extending Georgetown’s longest losing streak of the season.

Georgetown converted just 35.6% of its field goal attempts despite creating seven more chances than Butler with 59 shot attempts, largely due to its inability to capitalize on offensive rebounds and conversions. Furthermore, the Hoyas fell severely behind the Bulldogs both in 3-pointers made — 2 compared to Butler’s 13 — and points scored from the bench, with 8 compared to Butler’s 54.

Head Coach James Howard said an imperfect execution of the game plan led to troubles on the defense.

“You have to be disciplined when playing that action. We knew it was a penetration, kick, and off-side cut,” Howard said in an interview with The Hoya. “Their movement caused some problems. We ran some ball screens, but they were able to pass out of it and find the open player, making us pay with some threes from the corners.”

Ransom said the team can strengthen its presence by maintaining a fast tempo throughout the game.

“We do better when we’re aggressive,” Ransom told The Hoya. “The team looks better when we have the mentality that ‘We have that dog in us. We’re going to get the ball back.’ We have to know what the strengths and weaknesses are for every team and that’s something that we have to lock into.”

The Hoyas traveled to the University of Connecticut for a Jan. 15 away game, where they lost 65-50 to the No. 4 Huskies.