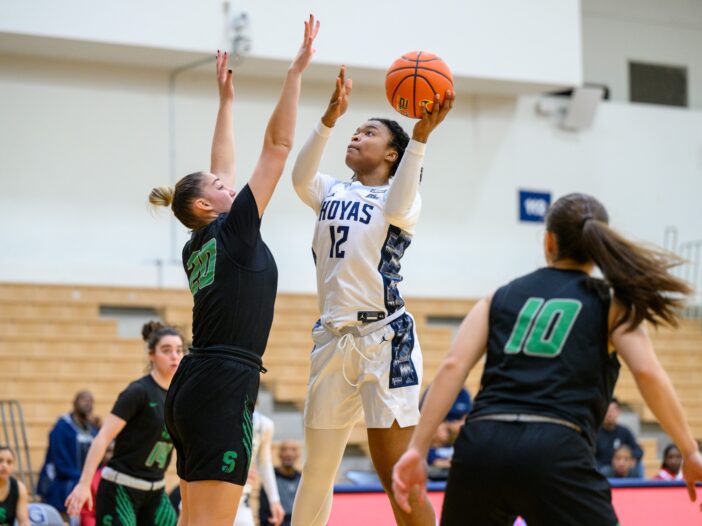 The Salem University Tigers proved to be no match for the Georgetown University Hoyas on Monday, Nov. 7, as the Hoyas opened their season with an emphatic 77-46 win over the Tigers.

Just like last season, the Hoyas (1-0) got off to a hot start and never looked back. A combination of staunch defense and offensive rebounding allowed the Hoyas to capitalize on the shooting woes of the Tigers (0-1) and seize a 22-6 lead in the first quarter.

The second quarter trended the same way as the first. The Hoyas more than doubled the Tigers’ score at the half, walking into the locker room with a 39-15 lead.

Junior guard Kelsey Ransom was a spark plug at both ends of the floor, recording eight points and two offensive rebounds in the first quarter alone, then finishing her outing with a team-high 16 points.

Ransom said her role has evolved, and she now needs to lead the younger players.

“As an upperclassman, I have the two years under my belt, and my role is to teach the underclassmen but also to learn from them, as well, to continue bettering myself as a player,” Ransom said in an interview with The Hoya.

While the team only lost two starters, both of whom graduated, Georgetown Head Coach James Howard’s strategy of involving the bench allowed him to allot plenty of minutes to new players. Most notably, first-year Kennedy Fauntleroy, who ESPN ranked No. 75 in her recruiting class, earned a starting spot at point guard.

“I was impressed,” Howard said in an interview with The Hoya. “I think you won’t see the true players in them until the second half of the season because it’s gonna take a lot of work in practices to get them moving and acclimated, and as they do this they’ll be a big part of what we do.”

The second half saw Salem press Georgetown to little avail, with the Hoyas’ guards regularly finding open teammates to create mismatches and fast-transition buckets. The Hoyas’ physical dominance continued all afternoon, as they doubled the Tigers’ 31 rebounds with 62 of their own, 30 of which came at the offensive end. This imbalance quickly widened the gap between the teams, allowing the Hoyas to take their largest lead of the night — 35 points — with just over two minutes left to play.

Rebounding proved to be crucial for Georgetown, as the team’s successful afternoon was slightly marred by a poor perimeter shooting performance. Georgetown was just 3-for-29 from beyond the arc and converted an abysmal 56% of its free throw attempts.

“They played a zone pretty much all night long and you gotta hit shots against the zone,” Howard said. “I thought we had good looks, if you want to win against better teams you gotta hit those open looks and you gotta make free throws.”

The Hoyas’ next chance to improve their shooting and extend their hot streak will come this weekend, as Georgetown travels to Temple University on Saturday, Nov. 12 for its second game of the season.